Dominion Season One presents the first season of the science fiction series on Blu-ray in the best manner possible. The picture and sound quality are both very good, but the series itself is a truly unfortunate idea. Built as a cheap television spinoff of the 2010 movie Legion, this new series cannot help but show its low budget roots in all aspects, including an underwhelming cast and a story that wants to be taken much more seriously than common sense will allow. Frankly, even the small number of fans of Legion will be hard-pressed to find much to justify spending multiple hours trying to get through this production. 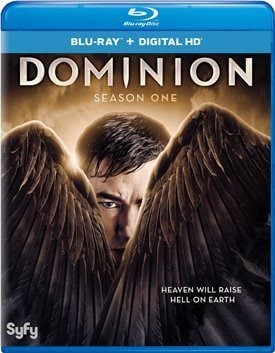 Dominion is one of those television series that’s really a head-scratcher, if you’re trying to figure out why anyone would make it or watch it. Built as a sequel to the 2010 Biblical science fiction action film Legion, the new series is produced cheaply in South Africa, with the primary characters picking up the movie’s story some 25 years down the road. Starring Christopher Egan as soldier/savior Alex, the 8 episode first season of the series focuses on a post-apocalyptic confrontation between factions of angels descended to Earth. There’s a fair amount more to the story, but it frankly all tends to dissolve in a miasma of portentous and pretentious rattling about how Alex is the “Chosen One” and how various characters are not exactly what they seem to be. If anything, the series seems to be one of the new wave of attempts to copy the epic pattern of Game of Thrones, albeit without the cast, writing or budget of its inspiration. One has to wonder why anybody would want to continue the story of Legion in the first place, given that the movie was unsuccessful both at the box office and in terms of impressing anyone with its storytelling. To be fair, the pilot for the new series has been directed by Scott Stewart, the same person who directed the 2010 movie, so there’s at least a strong sense of continuity with the earlier movie. However, that has to be tempered with the knowledge that Stewart’s career as a director has been sadly unimpressive. Granted, he did very well when creating VFX for some major Hollywood blockbusters. And he helped produce a great experimental film from director Rolf Gibbs called G (which literally threw a camera out of a plane and recorded the entire journey to the ground). Unfortunately, his new series, set in a future-time Las Vegas through the magic of unconvincing CGI, is a truly difficult serial to try to watch. Inexplicably, there has been enough viewers watching Dominion to justify SyFy picking it up for a second season of 13 episodes.

The Blu-ray set includes all eight episodes in 1080p HD picture and DTS-HD MA 5.1 sound, along with a few deleted scenes, an extended alternate cut of the season finale and a short gag reel.


The discs’ contents are:

“Pilot” – The series’ first episode, helmed by Legion’s director, Scott Stewart, clocks in at 1:06:00, or roughly 26 minutes longer than the average episode. This first episode establishes all the primary characters, the CGI-drenched recreation of Las Vegas, and a host of what the series creators hope will be absorbing plot devices.

Godspeed” – Deleted scene material is presented on the disc, separate from the episode (2:21).

“Something Borrowed” – A deleted scene is presented on the disc. (2:00)

“Beware Those Closest To You” – The oversize Season Finale actually runs just over an hour (1:02:07). A quick deleted scene is presented on the disc. (0:38)

“Beware Those Closest To You” Alternate Extended Cut – An even longer version of the Season Finale, including some alternate editing choices, is included, with a standard definition DTS soundtrack. (1:21:26)

Gag Reel (3:19, 1080p) – A short gag reel is included on the disc, mostly consisting of moments where the cast blows their lines. There’s one bit that keeps getting revisited, where cast members seem unable to open a door on cue. At the close, one of the cast wonders out loud “How many actors does it take to open a door?” The answer would seem to be: More than these three…

Dominion: Season One is presented in a 1080p AVC transfer (@ an average 25 mbps) that mercilessly presents a high definition picture of the series – which brings out accurate flesh tones in the cast but also tends to reveal the low-budget nature of the extensive CGI in the series (required to convince an audience that they're watching events in a future Las Vegas rather than Cape Town, South Africa). It’s actually quite a good high definition transfer, but what it’s revealing is something the creators may not have intended.

Dominion: Season One is presented in an English DTS-HD Master Audio 5.1 mix (@ and average 3.9 mbps) that is probably the strongest technical aspect of the Blu-ray set and of the series. There are plenty of opportunities for immersive sound during the multiple action sequences. The series’ bombastic score (established by Christopher Young in the pilot and continued by Jeff Rona for the regular episodes) enjoys full use of the home theater environment.

As noted above, there’s not much here in terms of Special Features. There’s really just the deleted scenes we previously discussed, as well as the alternate extended cut of the Season Finale and the quick gag reel.

Ultraviolet/Digital Copy – Instructions and a download code are included in the packaging for obtaining a Digital Copy of the series in HD.


Subtitles are available in English for the episodes and the gag reel. Standard chapter menus are not exactly included here – instead, each episode is itself a chapter. There are chapters within each episode, but they are not itemized in a menu – which means you may have to hunt through an episode if you stop the disc and restart it later.

Dominion: Season One presents this odd series in the best possible light, but one has to wonder how much that will help. The solid high definition picture on the Blu-ray set only serves to point up the low budget nature of this production. The series itself isn’t strong enough to recommend viewing for its own sake, and the smattering of special features doesn’t add much to the package.

F
Lie to Me Blu-Ray