In the 1950s, Walt Disney produced a series of documentary short subjects and features called True-Life Adventures that won a passel of Oscars and were among the finest nature documentaries ever made to that time. One specific experiment the studio tried with their True-Life Adventures was with the film Perri in which a fictional narrative was spun around the nature footage shot of a squirrel in the wild. Disney’s 21st century offshoot of those nature documentaries is now called Disneynature, and the latest in the series is Bears. Just like the most recent entries in the series, the animals in question are given names and a story as we follow them over the course of a year in their lives. 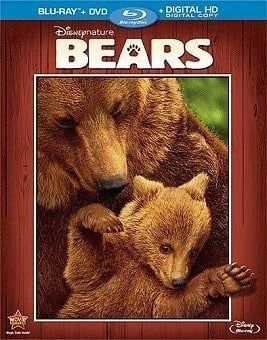 The Alaskan peninsula sets the scene for this remarkable year in the life of three brown bears: mother Sky and her two cubs Scout and Amber. Events follow in fairly sequential fashion: mother and cubs awake in the den near the end of winter when mother Sky is beginning to feel hunger and knows that in order to keep producing milk, she’s going to have to find sustenance. A precarious trip down from their mountain den avoids a nearby avalanche, the first of many perils the three must navigate in order to find food and stay alive. Along the way there are mammoth male bears hungry for one or both of her cubs, a gray wolf who stalks them continuously, and the navigation of mud flats, changing tides, and enemies who wait for the mother to feed so her distraction will enable them to steal one of the offspring. With the salmon jumping the be all and end all for Sky and her cubs, they must somehow stay alive from predators and even other bears who guard their own territory with scary ferocity. Sky knows of a spot called the Golden Pond where salmon eventually gather, but her lack of food may make her too weak to get her or her cubs there before it’s too late.In production over a two year period, Bears features kid friendly narration by John C. Reilly who often role plays as one of the three main characters in between offering more sober explanations of what we’re witnessing and explaining the hardships and dangers our protagonists are facing. But the film’s G-rating wins out over other considerations. Even though the bears sometimes engage in paw-to-paw combat, there is no death present among the numbers of bears we see. Thus, what we’re left with are many stunning views of a supremely misunderstood animal and the gorgeous environments in which they live. Directors Alastair Fothergill and Keith Scholey use slow motion during the salmon jumping scenes showing the breathtaking moments when nature’s creatures behave instinctively and we are allowed to watch in amazement and utilize time lapse photography to bookend the passing of the various seasons during the year.Because of the superb quality of the photography, we can honestly see Sky looking visibly thinner and weaker after she fails in several attempts to get herself a hearty meal over the course of weeks, and the characters which the directors have set up of shy Amber and extroverted Scout do seem grounded in reality as Amber stays close to her mother (often on her back) while Scout lumbers behind investigating everything and sometimes getting himself into trouble with his single-minded approach to the world (e.g. getting his claw stuck inside a clamshell, putting himself in real danger by not following his mother out of a cove with a rising tide.) By the directors giving these bears personalities (even if they’re fictional ones manipulated by editing), we’re drawn to them constantly while the film proceeds and care about their well being when things are at their direst.

The film has been framed at 1.78:1 and is presented in 1080p using the AVC codec. The photography is mostly quite breathtaking: sharp and detailed, clear, clean and with excellent, realistic color. There is an occasional soft shot (likely focus was not set quite right but the shot is included in the film for its unusually revealing nature), but those are the exceptions rather than the rule. The film has been divided into 16 chapters.

The DTS-HD Master Audio 5.1 sound mix offers a strong surround experience with George Fenton’s music and the sound effects of the wild beautifully entwined with John C. Reilly’s crafty narration which is rooted in the center channel. The roar of the avalanche, the waterfalls, and other natural events also gives the LFE channel something to keep it occupied.

Welcome to Alaska (6:07, HD): director Keith Scholey, cameraman Mark Smith, and several of the Alaskan guides offer behind the scenes views of the terrain the crew will be traversing and the fact that they were always at the mercy of the unpredictable elements.The Future for Bears (6:37, HD): Dr. Jane Goodall along with the film’s director Keith Scholey and several of the guides on the crew extol the virtue of protecting the bear but warn that its environment must also be protected along with the seas where the salmon which it needs for survival are found.A Guide to Living with Bears (7:05, HD): Producer Adam Chapman and director Keith Scholey along with several of the guides discuss their behavior around the creatures they were filming and the misunderstandings many have about the bear and its habits.How Did They Film That? (7:23, HD) Several cameramen who filmed scenes in the mountain dens or under the sea discuss the hazards and frustrations of their work in order to get the right shots.“Carry On” Music Video (1:36, HD): Olivia Holt performs the film’s theme song in this music video.Promo Trailers (HD): Disneynature: Monkey Kingdom, Maleficent.DVD/Digital Copy: disc and code sheet enclosed in the case.

Bears is an enjoyable hybrid documentary featuring families of animals which have been given fictional identities to give the film a different kind of dramatic intensity from the regular documentary picture. With outstanding video and sound and interesting behind-the-scenes looks at the intricate process it was to put this feature together, the film is definitely one to be recommended.

I've loved all the Disneynature pictures so far, even the weird "Wings of Life" one. Glad to see they haven't dropped the ball yet. Plan to pick this one up next time I'm around the shops.

When the price ends up dropping, I'll end up picking Bears up. Next Tuesday is super expensive as it is.

Jason_V said:
When the price ends up dropping, I'll end up picking Bears up. Next Tuesday is super expensive as it is.
Click to expand...

Unfortunately, it usually takes a long time before the DisneyNature titles do drop in price.

You guys are making me think I need to keep my copy. I only got it as part of the double-feature selection at The Disney Movie Club in order to get free shipping. Adding Bears to my order made the total $3 less than without it. I was going to sell it unopened on Amazon to save even more!

Saw this in the theater with the whole family and we all (kids & adults) loved it. I too will wait for a price drop but overall I highly recommend it!
You must log in or register to reply here.