Korean filmmaker Park Chan-Wook's DECISION TO LEAVE takes its cues from classic neo-noir as a jumping off point for his stylish take. In classic noir tradition, a Chinese femme fatale Seo-Rae (Tang Wei; LUST CAUTION) becomes a suspect of interest in the death of her Korean husband. Sticking to the formula, the married detective on the case, Hae Jun (Park Hae-il; THE HOST), immediately falls under her spell. He even orders the “Premium” Sushi special during his interrogation!

Park's silky filmmaking and daringly oblique screenplay (with frequent collaborator Seo-kyeong Jeong) follows its own path. While crimes are being investigated, it's really about the relationship between the pursued and the pursuer. It's never truly clear which is which. The Director cleverly uses the camera to insert the characters into scenes where they may (or may not) be present. It's obsession a la Hitchcock's VERTIGO. The performances are subtle, but involving. There's also a streak of humor, much of it provided by the Detective's wife (Jung Yi-seo) who takes an almost mathematical approach to their marriage. The nominal investigation seems to wrap up even if it isn't entirely satisfactory to either Seo-Raoor or the Detective. But, as with his previous THE HANDMAIDEN, Park reloads right as the movie seems to be winding down.

Park never makes it easy on the viewer. The emotional tides are constantly shifting. The POV is also in a continual state of flux and evolution. The two main characters are mercurial as well. Just as one is seemingly getting a grasp of their feelings, they change with the wind. The elongated last act isn't fully successful. Many viewers will likely feel as if they are the ones being toyed with - and, with some justification. But, Park compensates with some evocative settings in the mountains and by the sea. The snow gently falling on Seo-Rae's face as she contemplates her future. The wind blowing in Hae Jun's hair as he faces his destiny. When Park gets to the haunting climax, it's heart-breaking -- as in the best noir tradition. 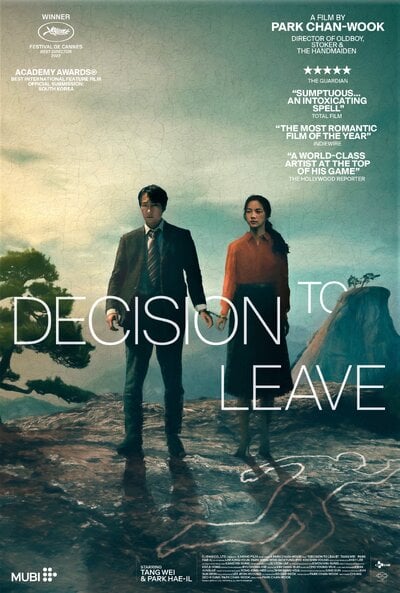