One of the greatest comedies ever made and among the best pictures in existence, Charles Chaplin’s City Lights is the supreme masterwork in a film career brimming with top-notch achievements. A true masterpiece combining comic invention and sentimental reflection in perfect alignment, City Lights broke so many of the conventions of its day, and yet now, as then, it remains a remarkably fresh and bracing entertainment, as wildly funny and as beautifully heartbreaking as a movie can be. 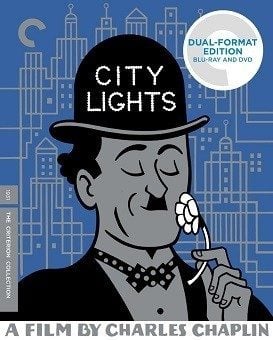 The Little Tramp (Charlie Chaplin) meets a blind flower girl (Virginia Cherrill) and is instantly smitten. He has a few cents to buy a flower but no real way to help her until he happens on a heartbroken, drunken millionaire (Harry Myers) who wants to kill himself. The Tramp intercedes and the two become fast friends who can party together and have wonderful times at night but become strangers in the daytime when the rich man sobers up and can’t remember anything about the night before. Trying to earn money for the girl to sail to Vienna to have an eye operation, the Tramp tries street sweeping and professional prizefighting, but only the millionaire can really offer the kinds of funds he needs for his beloved blind friend.Produced during a three year period when Hollywood underwent the talkie revolution, the silent City Lights was an enormous gamble for Chaplin who spent more than $1.5 million on his film (this during the early years of the Great Depression), but you’d never know his concern from the film’s opening moments which put a neat skewer into Hollywood’s latest new contraption. Instead of having three pompous speakers at a statue’s unveiling regale the audience with high flown words, we hear ludicrous gibberish piped through a kazoo, the first gag in a film loaded with superb comic set pieces. Chaplin’s entrance further deflates the pomposity of the elite as he manages to find a series of hilarious slapstick accidents on that single statue. From there we get endlessly inventive comic mayhem by the river, in a restaurant, at a house party, in the city streets, and, of course, the famous boxing match, but Chaplin’s cleverness even finds humor in the loving, sentimental scenes with the girl of his dreams in all but his final encounter with her containing achingly funny bits often at the Tramp’s expense. That final scene, naturally, is etched in the hearts and minds of all who have witnessed it: a combination of genius acting, evocative photography, and heartbreaking underscore to coax the tears from one’s eyes with absurdly embarrassing ease.It goes without saying that Chaplin’s performance is of genius construct: tough and tender, wistful and determined, and as always with the grace and agility of a ballet dancer. Virginia Cherrill was no actress when she was selected for the role, and as she herself admitted, Chaplin acted the part for her and she simply mimicked his suggestions. No matter how it’s achieved, she’s beautifully simple and appealing as the blind girl, and her climactic realization of the Tramp’s identity is one of the unforgettable moments in cinema history. Harry Myers is lots of fun as the Jekyll-and-Hyde millionaire, and Florence Lee is earnest and uncomplicated as the blind girl’s grandmother. As the Tramp’s worthy opponent during the boxing sequence, Hank Mann, a veteran of the Mack Sennett days of slapstick tomfoolery, earns his own place in cinema history.

The film is presented in its theatrical 1.19:1 aspect ratio and is offered in 1080p resolution using the AVC codec. The transfer is pleasingly sharp (rather than razor-edged) in keeping with the film stock of its day, and the grayscale is admirably achieved with clean whites and fine black levels. Though one may detect a tiny nick here or a slight scratch there, and there is some slight deterioration to the right side of some of the intertitles, there are no major artifacts to distract from the viewing experience. The film has been divided into 17 chapters.

The PCM 1.0 (1.1 Mbps) sound mix has the slightly tinny fidelity that would have been appropriate for sound films of the period (Chaplin composed the score and used sound effects sparingly but at key moments, always to impressive comic effect). Criterion’s engineers have done a masterful job eliminating hiss, pops, crackle, and flutter from the transfer and leaving the film in likely its best ever audio shape.

Audio Commentary: Chaplin biographer Jeffrey Vance offers an enthusiastic commentary track that offers lots of anecdotal and analytical data in addition to occasionally telling us what we’re watching on the screen. But it celebrates the film as the remarkable achievement it is and is a most worthy addition to the package.City Lights Today (26:48. HD): 2003 documentary by Serge Bromberg featuring animator Peter Lord extolling Chaplin’s talents as a filmmaker.Chaplin’s Studio: Creative Freedom by Design (16:14, HD): special effects expert Craig Barron discusses Chaplin’s utilitarian studio and backlot and how it worked for scenes in City Lights and his other memorable works.From the Set of City Lights (HD): four featurettes pertaining to the film’s production:The Champion (9:22, HD): excerpts from a 1915 Essanay short where the Tramp is first in a prize ring.Charlie Meets Boxing Stars (4:40, HD): Charlie meets and improvises with boxing stars Harry Mansell and Benny Leonard in home movies made at his studio in 1918.Theatrical Trailers (8:47, HD): a montage of English, French, and German trailers for City Lights.Forty-One Page Booklet: contains the chapter listing, the cast and crew lists, a series of black and white stills, author/critic Gary Giddins celebration of Chaplin and his art, and Chaplin’s own article about his career penned in 1966.Timeline: can be pulled up from the menu or by pushing the red button on the remote. It shows you your progress on the disc, the title of the chapter you’re now in, and index markers for the commentary that goes along with the film, all of which can be switched on the fly. Additionally, two other buttons on the remote can place or remove bookmarks if you decide to stop viewing before reaching the end of the film or want to mark specific places for later reference.DVD Copy: now included in these dual-format editions.

Charlie Chaplin’s greatest achievement as actor, writer, director, composer, and producer, City Lights is one for the ages. Criterion offers a beautifully detailed high definition transfer that serves up the film at its best with some wonderful bonus features to add extra interest to the package. Highly recommended!

My favorite Chaplin film and one on my wish list for Christmas. Also watch Kevin Brownlow and David Gill's excellent documentary Unknown Chaplin which shows lots of footage and outakes from his films.

atcolomb said:
My favorite Chaplin film and one on my wish list for Christmas. Also watch Kevin Brownlow and David Gill's excellent documentary Unknown Chaplin which shows lots of footage and outakes from his films.
Click to expand...

The one piece of vital footage not a part of this set (which was on that last DVD release of the movie and is a part of Unknown Chaplin) is Georgia Hale's filmed scenes when Chaplin tested her to replace Cherrill but later thought better of it.

Why only an excerpt from The Champion? I believe the full short has been released on DVD before by Image by with a Motilla soundtrack.

Ken Volok said:
Why only an excerpt from The Champion? I believe the full short has been released on DVD before by Image by with a Motilla soundtrack.
Click to expand...

The Criterion description called it an excerpt. I'm not sure I've ever seen the entire short, so I have no way of knowing how long it was supposed to be. How long is the full short?

Matt Hough said:
The Criterion description called it an excerpt. I'm not sure I've ever seen the entire short, so I have no way of knowing how long it was supposed to be. How long is the full short?
Click to expand...

imdb.com says that 'The Champion' had a length of 31 minutes. The review on DVDBeaver.com says it is only a 9:22 excerpt

http://www.imdb.com/title/tt0005074/
http://www.dvdbeaver.com/film/DVDCompare/citylights.htm
You must log in or register to reply here.