Charles Chaplin, cinematic artiste extraordinaire, did not spring fully formed onto the silver screen. Rather, he honed his craft and his art through years of performing in British music halls and in dozens of one and two reel comedies under all kinds of extraordinary conditions which might have crushed an ordinary performer. The result: one of cinema’s true renaissance men – producer, director, editor, composer, writer, and performer. The fourteen Chaplin short comedies contained in Chaplin’s Essanay Comedies cover a crucial period in the artist’s development: a period where he was gradually gaining the kind of independence that he needed in which to thrive. Until he got that, however, he resorted to tried-and-true methods of filmmaking that kept audiences howling and demanding more while he began to probe more deeply into the kind of filmmaking he truly wanted to endorse. These works from 1915 show Chaplin’s gradual maturation from mere baggy pants comic to an auteur capable of producing both big laughs and more thoughtful consideration of the human condition, a talent which would be more and more on display as the years progressed. 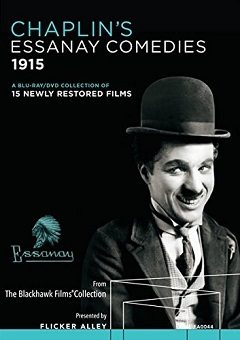 Amaray cases in a slipcase

Chaplin spent his first year in the movies under contract to Mack Sennett whose Keystone Studios produced slapstick comedies by the dozens (Chaplin made 35 shorts during his year there). Paired with contract players like Mabel Normand and Fatty Arbuckle, Chaplin learned the movie business quickly and wasted no time establishing himself as an audience favorite. But he longed for more control over the stories and gags in his films and felt that the $175 a week he was earning wasn’t sufficient in comparison to the other stars in the Sennett stable. Though Sennett was willing to up his salary to $400 a week, Charlie’s brother Sidney negotiated a deal with the Essanay Film Manufacturing Company for $1,250 a week plus a $10,000 signing bonus. During the next year, Charlie wrote, produced, directed, and starred in fourteen one and two-reel shorts produced first in Chicago, then outside San Francisco, and then finally in Los Angeles. These fourteen films plus another in which he cameoed in a Broncho Billy Anderson film His Regeneration make up the contents of this package.

At first, Chaplin’s working methods from his Keystone days carried over into his early films His New Job and A Night Out: filled with slapstick (lots of butt and gut kicking and wooden mallets on the head) and paired with another silent comedian Ben Turpin but lacking in elaborate story ideas and resisting any in-depth characterization. These are fast, funny farces, in the latter playing drunk throughout the entire movie echoing his more famous One A.M. which he would make at Mutual the next year but solo, always more effective than with a male comic partner. In fact, some of the most famous set pieces to come during his later periods of filmmaking elsewhere sometimes got their starts here (trained fleas, a boxing match, a swaying ship). During these fourteen films, other famous faces will pass by: Gloria Swanson in a bit, Broncho Billy Anderson, Snub Pollard in the amusing By the Sea, and, most importantly, Edna Purviance who becomes his leading lady through most of these shorts and will follow him through his Mutual, First National, and into the United Artists years.

Most of the films in the Essanay collection involve Chaplin in one of two modes: either a series of anarchic reactions to others’ superiority: In the Park, A Jitney Elopement, A Woman where he donned elaborate drag for the last time in his career, and most impressively in A Night in the Show where he plays two different members of the audience, both ill-behaved and equally hilarious, or attempting to perform ill-suited jobs for his inept little fellow: a wallpaper hanger in Work, a janitor in The Bank, a sailor in Shanghaied, a burglar in Police. In many of the productions, Chaplin depended on ace pantomime artists in supporting roles to give him strong support with his comic antics: Leo White who often played dandies and romantic rivals and Bud Jamison who was the standard heavy in many of the movies.

The best films in the Essanay collection, however, are those where Chaplin began to explore story ideas enhanced by deeper characterization which added a poignant aura to the shell of hilarity which enclosed most of the picture. (He would carry on this tradition in about half of the films he produced when he moved to Mutual the following year.) The first to really capture magic in a bottle was The Tramp, and Chaplin was notably surprised the audience found the combination of laughs and tears appealing. He tried and succeeded with a more complicated triangle relationship in The Bank, a janitor with his eye on a pretty teller who has fallen hard for the head cashier and made his penultimate effort Police a bittersweet saga of misguided kindness. The most elaborate production Chaplin attempted while there was a satire on Cecil B. DeMille’s expensive silent version of Carmen. Though Chaplin turned in a customary two-reeler, Essanay filmed additional scenes with Ben Turpin and released it as a four-reeler raising Charlie’s ire and leading to a court battle. This set restores as close as possible Chaplin’s version of Burlesque on Carmen.

Here are the fourteen Chaplin shorts (and one Billy Anderson short) which make up the contents of this package on two Blu-ray discs:

The films’ original 1.33:1 theatrical aspect ratio is faithfully reproduced in these 1080p transfers using the AVC codec. Cobbled together from a variety of sources which literally span the globe, the resulting shorts look as good as it’s possible for films that are a hundred years old to look. Of course within each short is a variance of picture quality from sharp and clean to faded, scratched, and duped. At their best, the grayscales of the films produce very good whites and rich black levels, but due to the ravages of time and the unavailability of always quality elements, blacks can just as easily be milky and contrast light and unappealing. We are all most fortunate there are as close to complete versions of these films as these transfers are.

The DTS-HD Master Audio 2.0 stereo sound mix offers scores for the films composed by Timothy Brock, Robert Israel and performed by the Mont Alto Motion Picture Orchestra. They greatly enhance the visuals and are quite enjoyable as musical accompaniment.

Triple Trouble (23:50, HD): a 1918 two-reeler edited together by Essanay from outtakes from other Chaplin productions, this was unauthorized by Chaplin and led to another court battle.

Charlie Butts In (10:24, HD): a one-reeler assembled from outtakes and alternate takes from A Night Out which Essanay distributed in the 1920s to continue to make money on the Chaplin name.

Charlie Chaplin fans will be ecstatic with the best-ever reproductions of Chaplin’s 1915 work at the Essanay Film Manufacturing Company contained in this outstanding box set. Combined with the collection of Mutual shorts which were released earlier, these sets add invaluably to the growing availability of Chaplin’s film output in high definition and come highly recommended.

Thanks, Matt! I have both this and the silent Sherlock on order from Flicker Alley. These are all blind buys and I'm glad to read this is a great set.

Looking forward to this one, I pre-ordered it yonks ago. Hopefully it ships soon!
P


Between this Essanay collection and Criterion's upcoming release of "The Kid" in 4K, the news just keeps getting better


Do you know if this collection marks the beginning of an annual release plan for all of the remaining Chaplin shorts?

I would imagine so, but am hoping that you can confirm.


With luck, Criterion will next give us "The Circus".


Thanks for the review and good news on these shorts; I'm ordering it, today!


Between this Essanay collection and Criterion's upcoming release of "The Kid" in 4K, the news just keeps getting better


Do you know if this collection marks the beginning of an annual release plan for all of the remaining Chaplin shorts?

I would imagine so, but am hoping that you can confirm.


With luck, Criterion will next give us "The Circus".


Thanks for the review and good news on these shorts; I'm ordering it, today!

I know of no such calculated release schedule. Criterion has the rights to a number of Chaplin projects and seems to be releasing them slowly. The releases from other organizations don't seem to be in any way tied to what Criterion is doing. It's just a coincidence.

PMF - I'm enjoying these releases also. I'd suggest reaching out directly to Flicker Alley via their website and ask them what their plans are. They are doing great work...still hoping for Mack Sennett vol 2 myself in addition to more Chaplin shorts

Sorry to bring this thread back up, but I can't seem to find any other info...did this title go Out of Print? Flicker Alley says out of stock but more on the way, and Amazon has the "over $100 3rd party seller" thing going on.

I think the Spanish version is still available at Amazon.es. It's considerably cheaper, but it has no extras. I'm pretty sure it's region free. You might want to look into that one.

Steve_Smith said:
Sorry to bring this thread back up, but I can't seem to find any other info...did this title go Out of Print? Flicker Alley says out of stock but more on the way, and Amazon has the "over $100 3rd party seller" thing going on.
Click to expand...

It's good to know there are some options both the Spanish version and the fact that it was in stock about a month ago. Thanks for the responses, I was able to get the Mutual shorts bought today, and the I have the Image release on dvd for right now.

Of course if you are region B capable, the BFI set may be the best of the sets based on content and Price -- UK around $23 shipped and appears almost identical content to the Flicker Alley. Spanish set is around $27 shipped though it is Region Free.
dvdcompare seemed to indicate the sets were equivalent overall

There are some variations in content between the 3 sets.
Encodes - it appears teh US/UK were based on the 2014 2K work and encoded 1080p/24.
The Spanish seems to indicate ithey are 1080i/50 encodes and may be older masters, but has a slightly different set of extras.

I need to get this!

The Spanish set is from the same masters. They all come from Cineteca Bologna. The Spanish set used to be 14 euros. I guess it went up in price after the others were released. The difference in interlacing is because of the way the speed is handled. Most companies use progressive, even though it causes judder on silent films. Interlacing handles the odd frame rate better.

I wanted to check back to say I got a reply from Flicker Alley saying yes it will be back in print, but to re-ask them in mid Feb and they should know a date then. Again thanks for the replies.

The BFI set is the best one of the Mutuals.

The Chaplin Essanay and Mutual BDs are all very different and some slightly inaccurate info has been posted above. Rather than rehash what's been written numerous times elsewhere, I'll point you towards: