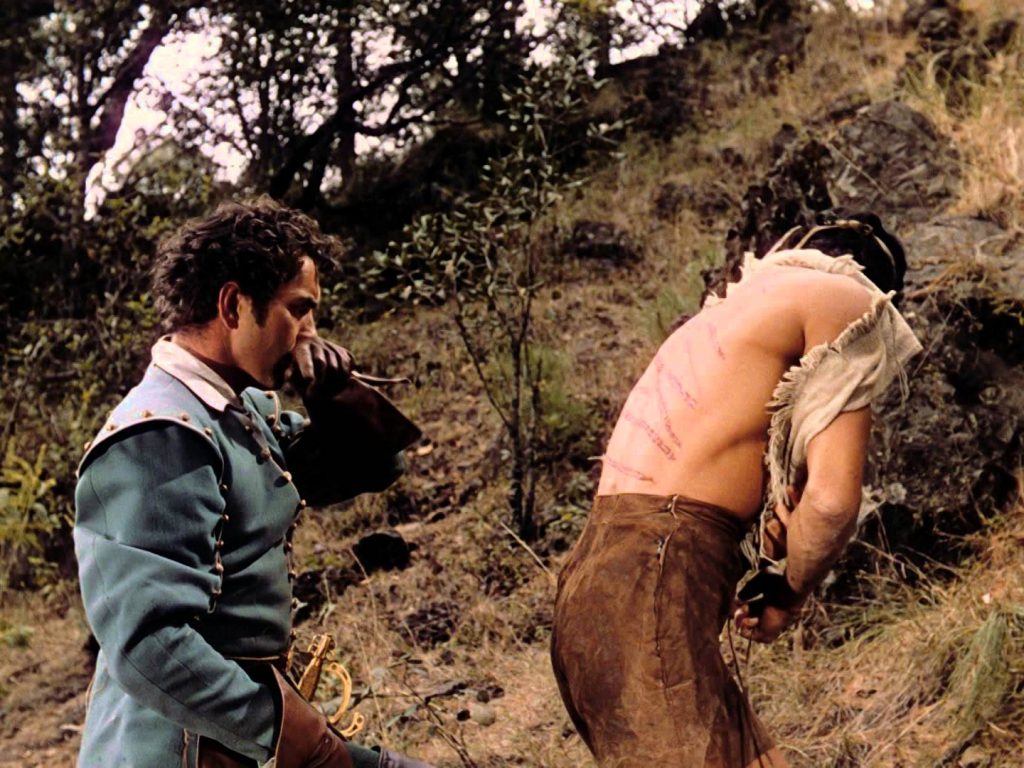 Historical fiction on an epic scale, Henry King’s Captain from Castile offers a lush production and a host of stars enacting the personal story of a fugitive from the 16th century Spanish Inquisition told against the backdrop of Hernando Cortez’s conquest of Mexico.

I'm watching my new Twilight Time blu-ray of this movie and enjoying it a lot! I agree with what Matt H. writes in his excellent review:

"....Director Henry King makes certain that the expensive location work in Mexico is captured on screen as the vast seas of extras are often shown in elaborate sequences where they can spread out over the immense terrain (the triumphant procession that concludes the movie with Alfred Newman’s stirring score as accompaniment is the stuff of Golden Age Hollywood). There are sword fights (Power was a master dueler), an early chase across rough terrain, and a threatening live volcano smoldering in the background in many of the later scenes in the movie.

This kind of swashbuckling role was made-to-order for Tyrone Power, and production was held up until his military service in World War II was concluded. While as lithe and fleet as ever, his added maturity here gives the role a touch of sadness and gravitas that weren’t present in his pre-war epics. Lee J. Cobb is a hearty best friend and always a pleasure to have in any scene...."

A recommended TT classic movie from long, long ago. And what surprises and twists and turns!


When she stabbed him at the end I was in shock!

PS By the way, the reason I bought this movie was because of Matt H's review. I read it just before clicking the buy button. Like most people here, I really do read the reviews here before I buy.
Last edited: Oct 26, 2018
Reactions: Matt Hough, PMF, Rodney and 2 others

I'm watching this one again now. I wish the 3-strip Technicolor OCN survived, but what we have still looks pretty good and will have to do.

PS I don't understand why a movie like this isn't on Disney+. Since Disney paid (overpaid?) c. $70 Billion for Fox and its library it seems foolish not to take full advantage of this library for their new channel during this time when so many people are hanging out more at home. They've put The Sound of Music and Hello Dolly on, but why not also put on the hundreds of good G-rated and PG-rated films from the Fox Library made starting in 1935?
Last edited: Saturday at 9:29 PM
Reactions: Matt Hough
You must log in or register to reply here.
Share:
Facebook Twitter Reddit Pinterest Tumblr WhatsApp Email Link