Initially considered a box office failure, Sam Raimi’s Army of Darkness quickly found its audience on home video. Released multiple times in various cuts in almost every imaginable home video format (across multiple studios), Shout! Factory has managed to somehow combine most of the special features from those previous editions while at the same time include three different cuts (four if you count the TV edition) in this latest and greatest Blu-ray edition. 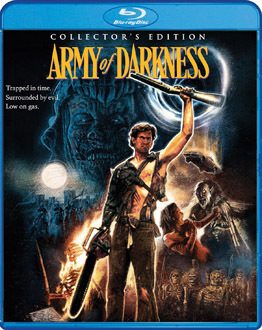 In the third installment of Sam Raimi’s Evil Dead trilogy, Ash (Bruce Campbell) finds himself hurled through a time vortex into the Middle Ages and quickly captured by Lord Arthur, fearing he is on Henry the Red’s side of a feuding battle. After doing battle in the Pit and escaping, he convinces Arthur to let Henry go and befriends the Wise Man (Ian Abercrombie), who tells Ash that the only way for him to get home is to retrieve the Necronomicon (aka Book of the Dead) and recite the words “klaatu, barada, nikto.” Of course, Ash being Ash, he forgets these words, mispronouncing them, which unleashes an Evil Ash and an Army of Darkness consisting of Deadite soldiers. It is up to Ash and Lord Arthur’s army to defeat the Deadites to not only save humanity, but to get Ash back home.

Army of Darkness is a very bizarre and often silly movie, throwing logic out the window and going for the gag, a tour de force for actor Bruce Campbell. It is no wonder that the studio at the time of its release didn’t understand the film or its intended audience, ordering a new ending and other various cuts to Raimi’s film. The theatrical cut is still very enjoyable, and it is interesting to see the often minor differences between the three cuts included in this Shout! Factory release. The movie also displays some of the best practical effects work ever created by the team at KNB EFX Group that still hold up today.

This reviewer has never seen the well-documented and much-maligned Screwhead edition that Universal released on Blu-ray in 2009, so I can only compare the three editions included in this set. Of the three, the obvious winner for best video is the International Cut appearing on Disc Three, thanks to a new 4K scan from the inter-positive. Detail is more defined, yet looks natural and not digitally altered, retaining its organic film grain. Likewise, colors are consistent and well-saturated, while contrast levels are exceptional with deep blacks. The International Cut is also the cleanest of the three, virtually free of any scratches or debris. The Theatrical Cut fares about the same (although both my PS3 and Sony BDP-S5100 exhibited the issue with the missing shot of Ash jumping the fence before entering the windmill). The Director’s Cut exhibits more noticeable dirt and scratches throughout, as well as a slightly lower contrast level.

All three cuts include both 5.1 and 2.0 DTS-HD MA mixes of the film, and sound exceptional. The 5.1 is obviously the better choice, with well-defined discrete surround effects and a wider soundfield. Dialogue is directed mostly to the center channel, with some brief panning, and never gets lost in the mix. The score by Joseph LoDuca benefits from the wider dynamic range and higher fidelity of the soundtrack, too.

Shout! Factory has taken most of the special features from the various releases of Army of Darkness and spread them over three discs, plus a new documentary.

Disc One (Theatrical Cut):
Medieval Times: The Making of Army of Darkness (1080p; 1:36:35): This is the only newly created extra for the set, and is yet another great documentary by the team at Red Shirt Productions, featuring interviews with Bruce Campbell, Ted Raimi, Bill Moseley, and other members of the cast and crew.

Original Ending (upscaled 1080i; 4:34): This is the same ending that appears (in much better condition) on the Director’s Cut.

Original Opening (upscaled 1080i; 2:58): Taken from a videotaped workprint, this is the originally intended opening featuring Ash talking to the camera, with optional commentary by Sam Raimi and Bruce Campbell.

Deleted Scenes (upscaled 1080i; 11:06): With optional commentary by Sam Raimi and Bruce Campbell.

Creating the Deadites (1080i; 21:29): Howard Berger and Greg Nicotero discuss their work on the film, interspersed with behind the scenes footage. Originally created for the 2009 Screwhead Edition Blu-ray.

Vintage “Making Of” Featurette (upscaled 1080p; 4:51): Typical EPK piece created prior to the release of the film.

International Theatrical Trailer (1080p; 2:08): This is probably one of the better trailers for this film.

Storyboards (1080p; 7:37): contains some sequences that were planned but never filmed.

The Men Behind the Army (upscaled 1080i; 18:58): Another look at the work of KNB on the film, taken from the Anchor Bay Director’s Cut DVD release.

Special Thanks (1080p; 0:50): Credit roll of those who contributed to this collector’s edition release.

This is the set that fans of Army of Darkness have been waiting for, encompassing four different cuts of the film, plus most of the bonus materials created for the home video releases, as well as a new documentary. Recommended.

This is a terrific release, but there's a slight error on the theatrical cut. A shot of Ash jumping over a brick wall (about 28 minutes into the film) is missing, which also creates an odd audio jump. Scream Factory has acknowledged the error is supposedly getting a replacement program going in the next week or two.


Also, some fans have noted that the International Cut seems to be missing a few seconds of footage. Scream has acknowledged this, but says it may be a problem with the materials they were provided by MGM, so they're not sure if they can fix that.


Just throwing the info out there. Thanks for the review, Todd!