After the twin triumphs of The Little Mermaid and Beauty and the Beast with huge grosses, critical acclaim, and awards pouring in, Disney’s success continued unabated with Aladdin, at the time the biggest animation hit in the studio’s history. Disney spent $35 million on bringing this animated musical to the screen, an enormous sum at the time though relative peanuts now, but the money shows up on screen in one of the most raucous, ravishing romps in animation history. But this was the first Disney animated hit set in the past with an unquestionably modern sensibility to it with multitudes of allusions to (then) present day events and personalities which, while undoubtedly funny, tend to date the picture now for younger viewers who won’t have a clue who Rodney Dangerfield or Ed Sullivan was and references which will likely become even more obscure as future generations continue to watch and still enjoy this terrific movie adventure. 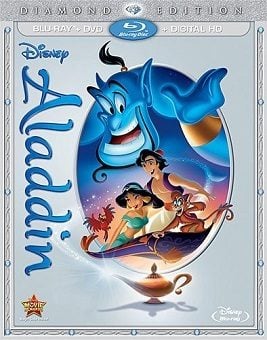 What those future viewers may appreciate, though, is an absolutely dazzling array of state-of-the art animation techniques that shamelessly show off the genius behind the animation factory at Disney in 1992. This is the fastest paced, most frenetically executed animated movie to its time (the only thing that approaches it is 1951's Alice in Wonderland, also from Disney), and its eye-popping color palette combined with the breakneck pacing and superb voice characterizations make it a true Disney original, a one of a kind feature cartoon experience.

The famous tale of the street urchin whose magical experiences with a flying carpet and a magic lamp were adapted from 1001 Arabian Nights for the film story which begins quite sedately and predictably. In the first half-hour, there is very little to suggest that we're about to witness something unique. Aladdin (Scott Weinger, singing voice by Brad Kane) is whisked away by an evil wazir (Jonathan Freeman) to enter a forbidden desert vault and return with its treasure, a magic lamp of inestimable power. He also meets the stubbornly determined daughter of the local sultan, Jasmine (Linda Larkin, singing voice by Lea Salonga), who refuses to marry on command and insists on marrying for love.

Perhaps the fact that Robin Williams voices the narrator of the story gives a slight clue that there will be hijinks ahead, but when his voice later issues from the magical Genie of the lamp, the film sets off on a whirlwind tale of romance, adventure, and intrigue, a sort of animated Indiana Jones complete with snakes, evil wazirs, narrow escapes, and the supernatural. Throughout, there are glimpses of earlier Disney epics (the climactic battle between Aladdin and the wazir is straight out of Sleeping Beauty with a giant python substituting for a dragon; the romantic ballad "A Whole New World" echoes dozens of ballads like "I'm Wishing" or "Someone's Waiting for You" from earlier features), but the total package is as far from the sedate majesties of Beauty and the Beast or Bambi as it's possible to be.

Robin Williams' Genie was a once-in-a-lifetime achievement for the comic actor. Surely the most memorable animated character from the Disney canon, the magical sprite is able to transform himself at will, conjuring up in animation the limitless gonzo of Williams' creatively insane mind in such startlingly swift images that one would have to view the film three or four times to have even an outside chance of comprehending them all. The movie misses a wonderfully ironic climax by not having the Genie revealed to be the narrator of the film (that was the original intention), but it's only a small quibble at best.

A few other minor problems mar only slightly the effectiveness of the picture. The five-tune song score is melodic without being (apart from its Oscar-winning “A Whole New World”) especially unforgettable (in comparison, there isn’t any song in The Little Mermaid or Beauty and the Beast that isn’t memorable). There are two production numbers: "Prince Ali" and the more effective "Friend Like Me," another Williams field day. But even when the Genie isn't in the picture, the animators can't help but be turned on to his electric influence, so the animation takes on herculean amounts of energy and pizzazz throughout.

Most of the voices chosen fit the other roles to perfection. The casting of separate singing and speaking voices for Princess Jasmine and Aladdin are a bit puzzling. Tony-winning actress Lea Salonga sings the Jasmine role beautifully, so why wasn't she used throughout? Similarly, Brad Kane who sings the title role also has Broadway credits and could easily have acted the dramatic portions of the script. (This doesn't take anything away from Linda Larkin or Scott Weinger who act the roles very well.) Also, if directors John Musker and Ron Clements do allow comic Gilbert Gottfried too much noisy blustering as the wazir's irksome parrot, it thankfully doesn't damage the scenes too severely, and his squawking is often very funny. Jonathan Freeman beautifully intones the devilishly evil Jafar with just the right dash of camp behind his wickedness.

Pictorially, viewers won't soon forget the exciting escape from the molten lava, the perfectly charming adventures of the flying carpet and the monkey Abu whose personalities are as well defined as any of the people inhabiting the frame, and the most visually lush color scheme of any movie ever undertaken by Disney or any other studio.

The film has been framed here at 1.85:1 and is presented in 1080p resolution using the AVC codec. Available in other regions for a year, this release doesn’t disappoint in terms of clarity of image or brilliance of color. The neon hues used to paint these majestic pictures continue to awe and are not spoiled by any noise, bleeding colors, or banding. Contrast is perfection throughout, and black levels are as inky as they’re possible to be. The movie has been divided into 25 chapters.

Disney offers a repurposed DTS-HD Master Audio 7.1 audio track. Purists may lament no theatrical audio track even in a lossy mix, but all others will be too busy enjoying the marvelously wide sound spread especially to the musical elements of the movie. Ensemble singers are often isolated in one of the rear channels, and directionalized singing voices and speech are a common and most impressive occurrence while the orchestrations allow for a wide spread of the music through the entire soundfield. Dialogue is also clearly presented (mostly in the center channel) with atmospheric effects getting split treatment in the fronts and rears.

Audio Commentaries: directors John Musker and Ron Clements and producer Amy Pell share one track while animators Andreas Deja, Will Finn, Eric Goldberg, and Glen Keane take part in the other. For the complete Aladdin experience, one must listen to both tracks as much valuable information is imparted about the film’s chaotic production.

The Genie Outtakes (8:53, HD): as a tribute to the late Robin Williams, directors John Musker and Ron Clements and Genie animator Eric Goldberg introduce a series of Williams audio outtakes not used in the finished film accompanied by storyboards and animated clips.

Genie 101 (3:59, HD): original Aladdin voice Scott Weinger explains all of the references to real-life persons imitated by Robin Williams as the Genie.

Ron & John: You Ain't Never Had a Friend Like Me (5:36, HD): directors John Musker and Ron Clements talk about their thirty-nine year friendship.

DVD Bonus Features (SD unless otherwise noted): the following featurettes were ported over from the 2004 DVD release of the movie:

DVD/Digital Copy: disc and code sheet for iTunes enclosed in the case.

Promo Trailers (HD): The Good Dinosaur, Inside Out, Tomorrowland.

For a movie that was so wildly popular in its day, it’s fairly surprising how long it has taken for Aladdin to come to Blu-ray. Still, the wait was definitely worth it since there are a treasure trove of interesting bonus features both old and new and a superb video and audio transfer to enjoy. Highly Recommended!

This review has been up for 11 minutes and there hasn't been a post going berserk about the colors yet? What kind of animation thread is this?!

Nobody boycotting because the aspect ratio in the theatrical and not the fully animated frames like the gold standard LD and DVD>
or that they left an extra off that;s been available for 15 years on the other release

Nobody flipping over the censored lines and censored Jasmine that ruined the entire film?

Not a single poster vilifying the reviewer as a Disney shill because he didn't notice the teal colors, the horrendous edge enhancement or the
4 pixel compression artifacts in teh lower left corner or frame 222045 through 222062, and the audio was 0.2 db too low in the back left speaker in Cbapter 6
for 30 seconds.

What kind of forum is this afterall? I'm disappointed in the membership

The genie is too blue?!?

I'd get mad at Disney for not offering a 3-D conversion like The Lion King, Beauty and the Beast, The Little Mermaid, and The Nightmare Before Christmas but I gave away all my shits already.

I wonder if any IMAX changes slipped by, even though the IMAX release was scuttled?

What's the typical duration for Disney to sell their blu-rays, before they're 'vaulted' for another decade? I'm a little interested in re-buying Aladdin (have the DVD), but am in no rush. Can I wait a year?

DaveF said:
What's the typical duration for Disney to sell their blu-rays, before they're 'vaulted' for another decade? I'm a little interested in re-buying Aladdin (have the DVD), but am in no rush. Can I want a year?
Click to expand...

I would think so. People more knowledgeable about Disney than me can chime in but I think they're available for around 2 years or maybe even more.

Has anyone else noticed an audio sync issue on this disc? I know it is animation, but the audio seems to start before the character's lips start moving. I first noticed it in the song "A Whole New World" but backed up a few chapters and it still seems to be there. I am using an Oppo BD-93. Anyone?
You must log in or register to reply here.