A Million Ways To Die In The West Blu-ray Review

A Million Ways To Die In The West herds its sheep onto Blu-ray with an edition that includes two versions of the comedy in sparkling high definition, and a brace of bonus materials that should please fans of Seth MacFarlane. The movie itself is a bit much to get through – the theatrical version alone runs almost two hours and the unrated version included on Blu-ray runs an additional twenty minutes past that. The movie tells of the comic misadventures of Seth MacFarlane’s lead character Albert in an Old West setting that allows every opportunity for Family Guy humor to play. The problem is that it’s way too long, and it’s not that funny. (And the constant sex references get old very quickly) That said, it’s a beautifully shot movie, making great use of scenic Western locations like Monument Valley. It’s just unfortunate that they didn’t find a better movie to shoot there. 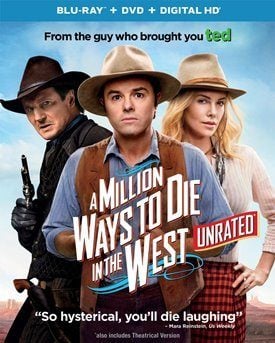 There is about twenty minutes of funny material in A Million Ways To Die In The West, but it’s unfortunately parsed over a two hour running time that seems truly endless. It’s oddly appropriate that this would seem to provide just enough substance to fill a typical episode of Family Guy – and it probably would have worked out better for everyone if it had been used there. Instead, we have an oddly overlong Western comedy here – one with some surprising moments of harsh violence, set in a beautiful Western setting with an attractive cast. Seth MacFarlane gives himself the lead role here – that of Albert, a shepherd whose problems with family, romance and the locals improbably lead him to the company of Anna (Charlize Theron), who just happens to be the wife of evil outlaw Clinch Leatherwood (Liam Neeson). There are subplots aplenty, concerning Albert’s ex-girlfriend and her new beau (Amanda Seyfried and Neil Patrick Harris), as well as Albert’s best friend and his prostitute girlfriend (Giovanni Ribisi and Sarah Silverman). And as is typical with a Seth MacFarlane comedy, there are opportunities throughout for straight-faced sardonic humor, usually poking fun at 21st century ideas and referencing any of a hundred different prior movie westerns, TV shows and even songs. (I have a strong suspicion that some of Albert is based on the old parody song “The Ballad of Irving”, concerning the 142nd fastest gun in the West…) At times, this can be quite funny. Sometimes it’s even a laugh-out-loud moment. (There’s a sly shot at Mila Kunis that snuck up on me fairly late in the game…) But to get there, the viewer has to sit through an almost endless barrage of graphic sex jokes, as well as some moments of uncomfortable violence (mostly in Liam Neeson’s scenes) that are practically out of another movie altogether. For that reason, I can’t recommend this movie. But I do think that fans of Seth MacFarlane will have a good time here – I’m fairly certain that they picked up this title as soon as it became available.A Million Ways To Die In The West was released on October 7th on Blu-ray and DVD. The Blu-ray includes two versions of the movie in high definition picture and sound, as well as a commentary and a little more than 45 minutes of special features, mostly consisting of deleted or alternate footage. The DVD holds the theatrical version, the commentary and about 15 minutes of those bonus materials. The Blu-ray also includes the DVD edition in the packaging, along with instructions for downloading a digital copy.

A Million Ways To Die In The West is presented in a 2.40:1 1080p AVC encode (@ an average 18 mbps) that presents the beautiful Western settings in glorious detail. Monument Valley continues to look wonderful here. Of particular appeal in this transfer are the beautiful period costumes, in enough detail that you can practically count the threads.

A Million Ways To Die In The West has an English DTS-HD MA 5.1 mix (@ an average 3.7 mbps) that provides a great platform for Joel McNeely’s booming Western score, as well as a satisfying level of atmospheric depth in many crowd scenes. DTS 5.1 mixes in Spanish and French are also included, as is an English DVS track. In a strange error, the packaging indicates that only standard Dolby Digital 5.1 mixes are present, but that is not the case.

A Million Ways To Die In The West comes with two versions of the movie, a commentary that works on both, and about 45 minutes of bonus material, nearly half of it consisting of deleted material in one form or another.Unrated Version – (2:15:00, 1080p) (EXCLUSIVE TO BLU-RAY) – This is a version of the movie that runs 20 minutes longer than the theatrical cut (which clocks in at 1 hr 56 mins). Given that the theatrical version already runs way too long as it is, pouring on ANOTHER 20 minutes feels beyond excessive.Commentary with Seth MacFarlane, Charlize Theron and Alec Sulkin and Wellesley Wild – (AVAILABLE BOTH ON BLU-RAY AND DVD) – This scene-specific commentary can be found on both versions of the movie on the Blu-ray. It’s mostly a joke-fest, with MacFarlane, Sulkin and Wild exchanging shots throughout. (We should keep in mind that Sulkin and Wild are writers who have worked with MacFarlane since 2005 on Family Guy as well as on Ted, so they’re riffing on material they’ve been using for years…) Charlize Theron actually comes across as the sanest person in the room at times, usually trying to get the guys to perhaps focus on the movie and talk about what’s at hand. MacFarlane does show an impressive understanding of film, particularly of Westerns. Theron mentions the difficulty of shooting various scenes, particularly ones that were done in extreme heat while she was wearing heavy period clothing.Alternate Opening – (3:27, 1080p) (EXCLUSIVE TO BLU-RAY) – This is an alternate version of the opening gunfight in the movie, with Seth MacFarlane getting a bunch of different joke lines out before the bullets fly.Alternate Ending – (0:37, 1080p) (EXCLUSIVE TO BLU-RAY) – This is just a very quick alternate tag to the movie, showing two characters arriving south of the border.Deleted, Extended, and Alternate Scenes – (7 Total, 10:49, 1080p) (EXCLUSIVE TO BLU-RAY) – This is a collection of seven scenes in a different form than they were presented in the movie, if they were even in it in the first place. At least half of the material is devoted to alternate ideas for a hallucination by Albert late in the movie. The scenes can be viewed individually or via a “Play All” option.Gag Reel – (5:43, 1080p) (AVAILABLE BOTH ON BLU-RAY AND DVD) – Here we have almost six minutes of blown takes and crack-ups, many times featuring Sarah Silverman or Giovani Ribisi.Once Upon a Time, in a Different West – (10:06) (EXCLUSIVE TO BLU-RAY) – This featurette goes into the genesis of the production, with the various cast members talking about how they got roped into it, in a manner of speaking.A Fistful of Dirt…In Your Mouth – (10:49, 1080p) (AVAILABLE BOTH ON BLU-RAY AND DVD) – This featurette gets into a surprising amount of detail about the production, including the costuming and location shooting, which actually did include dust storms that really can result in dirt being blown into people’s faces and mouths…The Good, The Bad and the Increasingly Decreasing Population – (6:41, 1080p) (EXCLUSIVE TO BLU-RAY) – This featurette focuses on the various celebrities who came out to play small cameos at multiple points in the movie, including Bill Maher, Kaley Cuoco, and Ryan Reynolds. There is of course one other fun cameo to speak of, which riffs directly from a recent Tarantino movie…DVD – The Blu-ray packaging includes the DVD edition, which holds the theatrical version in standard definition with a Dolby Digital 5.1 mix in English, Spanish and French (@448 kbps) as well as the English DVS track. The DVD includes the commentary, the gag reel, and “A Fistful of Dirt…In Your Mouth” from the Blu-ray.Digital/Ultraviolet Copy – The packaging has an insert that contains instructions for downloading a digital or ultraviolet copy of the movie. Subtitles are available in English, Spanish and French for the film itself, as well as for the special features. A standard chapter menu is included for quick reference.

A Million Ways To Die In The West has all the outward beauty of a classic Western, and about twenty minutes of genuinely funny material performed by an attractive, talented cast. Sadly, the movie runs nearly two hours in just the theatrical version, and there’s no way it can sustain so little material for that long. Fans of Seth MacFarlane will enjoy the high definition presentation here, as well as the commentary with him, but more casual fans are likely to be put off by the endless parade of sex jokes and

I never got around to seeing this, but I love Family Guy. I might buy the Blu-ray when it goes cheap. I can see this turning up in Amazon's three for £17 offer in no time at all.
You must log in or register to reply here.