Forum List What's new Dark Style Change width
Log in Register
What's new Search
Menu
Log in
Register
Navigation
Install the app
More options
Dark Style
Close Menu
Posted on October 20, 2019 by t1g3r5fan
You are using an out of date browser. It may not display this or other websites correctly.
You should upgrade or use an alternative browser.
Hitchcock's first sound film debuts on Blu-ray 4 Stars

After The Lodger: A Story of the London Fog (1926), a young British filmmaker named Alfred Hitchcock seemed to have found a niche as a budding master of suspense, even though he was busy working in different genres. However, with Blackmail – Britain’s first talking motion picture – Hitchcock firmly established himself in the suspense genre, paving the way for future success on both sides of the Atlantic. Long available on public domain home video releases, Kino Lorber has given both sound and silent versions of the movie its Blu-ray debut.

Alice White (Anny Ondra) just had an argument with her detective boyfriend Frank Webber (John Longden) and left with an artist she previously had a date with. However, she ends up killing the artist in self-defense when the heel tries to sexually assault her; when assigned to the case, Frank covers up for Alice, but now has to contend with a small-time criminal (Donald Calthrop) who witnessed Alice on the night of the murder. Now Frank and Alice have to find a way to clear her name while dealing with the blackmailer who could bring them both down…

If The Lodger first demonstrated his brilliant use of imagery as a hint of what he would be capable of, then Blackmail represents one of the first true instances in which Alfred Hitchcock would demonstrate a budding mastery of both image and sound. Although first conceived as a silent picture, Hitchcock had to transition to sound midway through production; rather than chafing, the Master of Suspense used the newly implemented use of sound to his advantage. For example, the scene taking place on the morning after the murder makes a clever use of the word ‘knife’ in context to the images on the screen; in addition, the film also makes use of one of the first cases of dubbing – actress Anny Ondra had a decent speaking voice but a thick accent that clashed with her character, so Joan Barry dubbed all of Alice’s lines in the sound version. Throw in some elements of Hitchcockian touches (the director’s cameo, the bedeviled blonde, a thrilling chase during the climax, etc.) and it creates a very solid thriller which is more than just the very first British film with spoken dialogue; Blackmail proves that Hitchcock was well on his way to earning the Master of Suspense moniker on both sides of the Atlantic while further establishing many of the distinctive touches that have come to adorn many of his works.

As mentioned earlier, Anny Ondra – the first of many blondes in Hitchcock’s movies – is a solid lead, even though her lines are dubbed in the sound version; the film would also be her last in England as a result. John Longden is a capable leading man as the detective assigned to the murder; it was the first of five movies he would make with the Master of Suspense. Donald Calthrop has a plum part as the hood who knows about the murder and tries to blackmail both Frank and Alice; he made three more movies with Hitchcock, but this was likely his best role out of the four. Other players worth mentioning are Cyril Ritchard as the artist whose attempt to rape Alice ends with his death, Sara Allgood and Charles Paton as Alice’s parents, Phyllis Konstam as the neighbor whose conversation about the murder nearly sends Alice over the edge, the aforementioned Joan Barry as Alice’s speaking voice, and Percy Parsons as the crook being arrested at the start of the film; one last note: the role of the Chief Inspector had two different actors playing it – Sam Livesey portrayed the Chief in the silent version while Harvey Braban took on the part in the sound version.

The sound version is presented in both a 1:33:1 aspect ratio on disc 1 and the original 1:19:1 aspect ratio on disc 2; the silent version is presented in a 1:33:1 aspect ratio. Both versions have a solid greyscale as well as a solid attention to fine details in addition to the film grain being organic in appearance. Scratches as well as some speckling are present, but that’s to be expected of a film from the transitional era from silent to sound pictures. Overall, both versions represent a definite improvement over previous public domain home video releases and likely represent the best they will ever look on home video. One final note: if you’re wondering which aspect ratio to choose for the sound version, go with the 1:19:1 version, as it closely represents what was originally shown to audiences in 1929.

Both sound and silent versions of the movie are presented with a 2.0 DTS-HD Master Audio track. Dialogue on the sound version is discernable and strong along with the sound effects and score accompanying the film. As for the silent version, the score by the Mont Alto Motion Picture Orchestra is strong with great clarity and fidelity. There are some instances of crackling, popping and hissing present on the soundtrack of the sound version, but given the age of the materials utilized here, it’s not too surprising. Overall, both versions of the film are given what will likely be the best audio tracks for a home video release.

Commentary by film historian Tim Lucas – Recorded for this release, the film historian goes over the subtle differences between each version as well as some of the background behind the making of the movie. A very informative and insightful track.

Hitchcock/Truffaut audio interview excerpt (10:27) – The two legendary filmmakers talk about the movie in this excerpt from the famed interview.

Blackmail is not only a crucial film in Alfred Hitchcock’s career, but a major milestone in British cinema as a whole and one of the greatest ever made in the UK. Kino has put all previous public domain releases to shame with a high quality release featuring both versions (with two different aspect ratios on the sound version) and a solid array of special features to accompany it. Highly recommended and worthy of a spot on any serious cinema lover’s shelf.

This review needs amending, as Kino's BD was comprehensively cocked up.

Conclusion: The second disc repeating the sound version is superfluous and both transfers have botched aspect ratios.

If you want to add to the discussion of the release here, go for it. Agree/disagree...whatever. That's what we do...here. We discuss what's good and not good about home video releases.

But if you want to drive traffic away from here to your own site to do that...not cool.
You must log in or register to reply here. 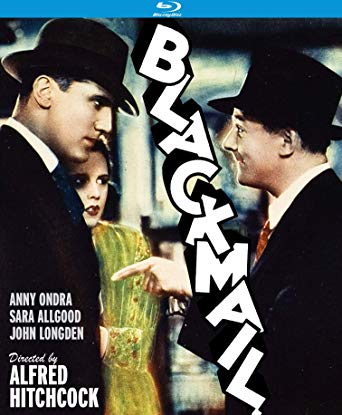