Forum List What's new Dark Style Change width
Log in Register
What's new Search
Menu
Log in
Register
Navigation
Install the app
More options
Dark Style
Close Menu
Posted on August 5, 2019 by Matt Hough
You are using an out of date browser. It may not display this or other websites correctly.
You should upgrade or use an alternative browser.
Early Hitchcock talkie is a sophisticated and well directed whodunit. 4 Stars

Alfred Hitchcock’s third sound film Murder! is a cracking mystery (a genre he generally avoided) that shows how quickly the young filmmaker had adjusted to the rigors of sound films and begun using the medium to his advantage.

Alfred Hitchcock’s third sound film Murder! is a cracking mystery (a genre he generally avoided) that shows how quickly the young filmmaker had adjusted to the rigors of sound films and begun using the medium to his advantage. With none of the static camerawork and unimaginative direction that early sound films in Hollywood displayed, Murder! not only seems vivid nearly ninety years after its production but also includes story points and characters which were far advanced for their era.

Actress Edna Druce is found dead, and fellow thespian and sometime enemy Diana Baring (Norah Baring) can’t explain why she’s in the murder room with the murder weapon at her feet. Diana is convicted and awarded the death penalty, but juror Sir John Menier (Herbert Marshall), though coerced by the other jurors into voting her guilty, thinks she’s innocent. An actor himself, Sir John begins collecting clues with the help of stage manager Ted Markham (Edward Chapman) and revisits the crime scene in an attempt to clear Diana. His efforts are yielding results, but they might end up fingering another performer with ties to Edna and Diana’s touring company.

The screenplay by Alfred Hitchcock, his wife Alma Reville, and Walter Mycroft based on the play Enter Sir John by Clemence Dane and Helen Simpson manages to mix interestingly different stratums of show business society which is illustrated by their manners, their dress, their lodgings, and their desperation for viable employment (one actor moonlights as a circus performer). This is paralleled by the jury deliberation sequence where again middle class and upper class must mix together in a room to come to a common understanding, and when the result isn’t immediately forthcoming, pressure is put on the dissenting parties until they comply. Hitchcock also veers away from a standard whodunit formula by taking us into the wings of the farcical play which continues even when two of its actresses are missing (one dead, the other arrested for her murder) as bumbling policemen attempt to seriously interrogate the actors while they’re jumping into and out of costumes while the audience in the background roars at the on-stage antics, a clever sequence that accomplishes little in terms of narrative (it does introduce us to some of the actors who become suspects later in the piece) but provides a stark contrast to the life and death story of the accused actress. We see Hitchcock using montage to great effect in several places in the movie, too: assorted jury members stating their opinions in rapid-fire cuts; the Markhams individually hustling and bustling to prepare for a visit from the great Sir John Menier. As he was wont to do throughout his career, Hitchcock’s fascination with sexual nonconformity and psychological dysfunction find their way into this narrative. A transvestite has two startling sequences in the movie, and a suicide makes for a surprising sequence during the proceedings.

Herbert Marshall’s first sound film performance marks an auspicious debut for him. His honey-toned voice and ease before the camera would stand him in good stead for the next thirty years, and his Sir John Menier is a thoughtful protagonist but not without flaws. Second-billed Norah Baring does more posing than emoting as the confused and dumbstruck Diana. Edward Chapman and Phyllis Konstam are delightful as the Markhams, eager to please Sir John and possibly earn lifetime contracts on his payroll. Esme Percy has some striking moments as Handel Fane, the fiancé of the convicted girl while Miles Mander, like Norah Baring, appears thunderstruck in his few scenes as the devastated husband of the murdered actress. R.E. Jeffrey milks his sequence as jury foreman for a few laughs, and Una O’Connor is likewise priceless as a landlady with five rambunctious scalawags in tow.

The film is framed at 1.37:1 and is presented in 1080p resolution using the AVC codec. There are a few slight scratches here and there and some unevenness in density in a scene or two, but otherwise, the film looks remarkable for its age: sharp and crisp with a nice layer of film-like grain and an excellent grayscale that offers deep blacks and impressive whites. Occasionally the movie fades to black and then comes back into focus, possibly an age-related anomaly that momentarily takes the viewer out of the movie-watching experience. The movie has been divided into 8 chapters.

The DTS-HD Master Audio 2.0 mono sound is appropriate for its era of early sound reproduction. The dialogue is usually well recorded with only an occasional imbalance between it and other speech and sound effects going on simultaneously. There is some occasional muffling of the dialogue, but, again, it’s very infrequent.

Mary (1:22:07, 1080p/AVC codec, DTS-HD MA 2.0 mono audio): the 1931 German-language version of Murder! Directed by Hitchcock on the Elstree sets with a German cast apart from Miles Mander, this has not received any video or audio restoration, so the image shows its age and the audio is hissy and much less full-bodied compared to Murder!

Audio Commentary: critic Nick Pinkerton offers a well-researched commentary and knowledgeable analysis of the movie in his track giving us information on all the major actors in the piece and repeating pretty much all of the information Hitchcock imparted to Truffaut in their interview together (also offered as a bonus feature on the disc.

Hitchcock/Truffaut (14:19): Hitchcock relates stories about the making of Murder! to Francois Truffaut. The French/English interpreter also present is somewhat intrusive in this audio-only track, and all of the information imparted is repeated in Nick Pinkerton’s commentary track.

Alternate Ending (10:06, HD): the somewhat longer ending used in the American release of the movie.

How wonderful for Studio Canal and Kino Lorber to offer such a beautiful copy of one of Alfred Hitchcock’s early sound movies Murder! to eager and willing fans of the great director. The generous selection of bonus features offered makes this an even better bargain. Highly recommended!

Interesting aspect ratio. Possibly not from original elements. Should be 1.19. Early sound on film.

Robert Harris said:
Interesting aspect ratio. Possibly not from original elements. Should be 1.19. Early sound on film.
Click to expand...

That's what the liner notes credited. I didn't actually measure it myself. It could be closer to that than 1.37:1.

This is interesting that this title and Blackmail are coming out! Glad to see it coming as I just watched them on some pretty bad transfers. I didn’t know they were cited as pirated even though they are from a known company that does licensed releases.

I thought Murder and Blackmail were pretty well done films. Looking forward to seeing them on these new blu rays!

Robert Harris said:
Interesting aspect ratio. Possibly not from original elements. Should be 1.19. Early sound on film.
Click to expand...

The old french Canal dvd was 1.33:1. That may be the only element they have.

The 54 minute documentary that was announced in the pre-release press release isn't here. A bit disappointed. The film looks surprisingly good considering how old it is but it could have done with a bit more TLC and restoration. I have no idea what the source is for this as it doesn't state.

I got my copies of Murder and Blackmail arrived today. The first disc of Blackmail had dislodged from the spindle so it was loose and sliding around. Luckily the printed side was sliding against the other disc. The play side looked ok. I’ll be checking out the films shortly.

I received both titles today. Looking forward to watching them this weekend.
You must log in or register to reply here. 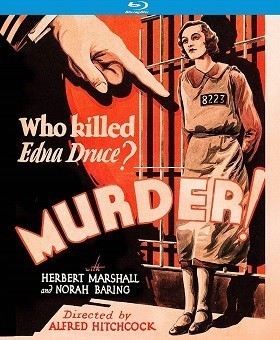