As a tie-in to the Elizabeth Banks-helmed reboot, Sony has released the 2000 movie adaptation of the 1970s jiggle show Charlie’s Angels on 4K UHD Blu-ray.

When software genius and founder of Knox Technologies Eric Knox (Sam Rockwell), is kidnapped, company president Vivian Wood (Kelly Lynch) hires a team of private investigators known as Charlie’s Angels. The team consists of Natalie (Cameron Diaz), Dylan (Drew Barrymore), Alex (Lucy Liu), and John Bosley (Bill Murray). The three girls believe the person behind the kidnapping is Roger Corwin (Tim Curry), the head of a rival technology company, Redstar, and begin by stealing his Palm Pilot to help track down any known associates. From there, the plot goes haywire, as we learn that Charlie (the voice of John Forsyth) is Corwin’s real target as revenge for killing his father in Vietnam or something like that.

Charlie’s Angels is a movie that would not be made like this today, a film that showcases its three female stars as nothing more than sex symbols. The plot is pure vaporware, so predictable that one can only laugh all these years later seeing Lucy Liu play an investigator that’s no where near as brilliant as her character Joan Watson on the CBS drama Elementary, who would have had this figured out well before the first commercial break. Former music video director McG made his feature debut with this film, using the same fast-cutting music-paced style he did on videos for Barenaked Ladies (One Week) and Smash Mouth (All Star). It’s a forgettable action film that somehow managed to earn enough at both the box office and on home video to greenlight a sequel three years later, Charlie’s Angels: Full Throttle.

Charlie’s Angels was photographed in Super 35mm and completed on 35mm with anamorphic release prints in the 2.39:1 aspect ratio. Sony has created a new 4K scan of the camera negative (per Sony’s press release) for this release and added HDR10 high dynamic range. Similar to Hellboy, don’t let the poor quality of the Columbia Pictures logo fool you (on Charlie’s Angels it appears overly dark), as the logo was over-processed optically as part of the opening prologue. Once that prologue begins, this release is definitely everything we’ve come to expect for a Sony catalog title in 4K UHD Blu-ray. Colors are vivid with natural gradations, black levels are deep and inky while retaining shadow details, and whites are bright without appearing to bloom. Detail is excellent, from the freckles on Lucy Liu’s cheeks to the intimate fabric textures, with light to moderate film grain throughout. The higher resolution, however, does make optically printed blue-screen elements much more obvious.

Charlie’s Angels has been remixed in Dolby Atmos for its 4K UHD release, and the results are very impressive. This was always a loud movie, and even more so now. The big difference is the more seamless movement of sounds within the listening environment and more robust LFE on the Atmos track. Heights are used to broaden the listening area, mostly with atmospherics and extending the pop music and score by Edward Shearmur. Dialogue is clear and understandable throughout.

Sony has included a few “new” special features on the UHD disc, while including the previous 2010 Blu-ray release where the remaining extras can be found.

Blu-ray Disc:
Audio Commentary with Director McG and Cinematographer Russell Carpenter: The two men discuss the many action set pieces from the film among other items on making the movie.

Another excellent 4K UHD presentation by Sony, but the movie is an acquired taste. 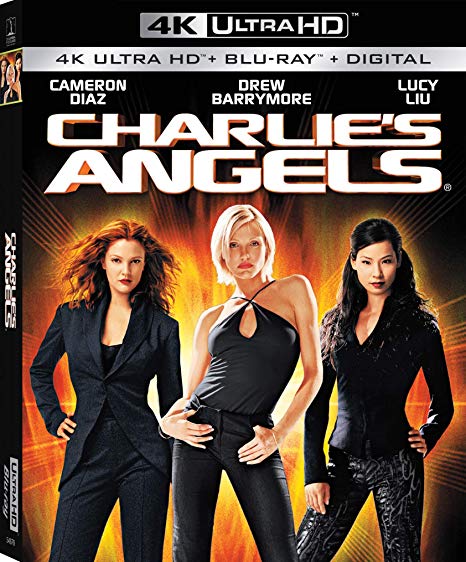