Forum List What's new Dark Style Change width
Log in Register
What's new Search
Menu
Log in
Register
Navigation
Install the app
More options
Dark Style
Close Menu
Posted on July 8, 2018 by Josh Steinberg
You are using an out of date browser. It may not display this or other websites correctly.
You should upgrade or use an alternative browser.
One of Alfred Hitchcock’s minor works debuts on Blu-ray. 3.5 Stars

Under Capricorn reunites Alfred Hitchcock with one of his best leading ladies, Ingrid Bergman, and features a return of the long take technique he pioneered in Rope, but falls short of his usual high standards. Hitchcock himself apparently considered the film one of his lesser works, and there’s no reason to disagree with the director on that.

Under Capricorn is a frustrating film in the canon of Alfred Hitchcock. While it has many of the values which made his previous films artistic and/or commercial successes (the long takes of Rope, the talents of leading lady Ingrid Bergman, to name but two), it falls short of his earlier and future triumphs. Most Hitchcock films, good or bad, are compulsively watchable; Under Capricorn’s greatest sin is that more often than not, it’s just dull. While the film has individual moments and elements of note, the whole is unfortunately somewhat less than the sum of its parts.

Set in colonial Australia in 1831, the film begins with the new arrival down under of Charles Adare (an adequate but unspectacular Michael Wilding), who is a cousin of the governor. Hoping to strike it rich, Charles quickly becomes friends with Sam Flusky (played by Joseph Cotton, in a stiff performance), who needs help consummating a land deal. Charles soon realizes that the two men have a connection in the form of Sam’s wife Henrietta (Ingrid Bergman), who was a childhood friend of Charles’ sister but has become a social outcast and alcoholic in her adopted Australian home. As Sam and Charles plot to expand their fortunes, Charles begins living at Sam’s home, and finds himself drawn to Henrietta. As Charles helps to bring Henrietta back to health, the two begin to develop feelings for each other. Meanwhile, a dark secret lurks over Sam and Henrietta’s head, the reason for their relocation to Australia and the cause of Henrietta’s drinking.

The film has all of the elements in place that could lead to an above-average Hitchcock thriller, but the biggest issue is that the film is played as a straight drama rather than a suspense picture. The very construction of the film’s story seems to go against Hitchcock’s often quoted explanation of how to lure in an audience. To paraphrase the quote, if you have two people having a mundane conversation at a table where someone has hidden a bomb underneath, if you explode the bomb without first setting it up for the audience, you’ll give them a momentary surprise. But if you let the audience know there’s a bomb ticking before those two people sit down, the audience will be in suspense for the entire sequence and feel connected to the action onscreen. With Under Capricorn, Hitchcock sets up a scenario where the viewer can instantly feel that all must not be as it seems, but by emphasizing the love triangle while hiding the source of Henrietta’s depression and alcoholism, the film makes the audience wait for an explanation that seems like much too little and much too late when it does arrive. The characters keep us at arm’s length for so long that once their secrets are finally revealed, it’s not enough to make up for the distance they’ve kept all through the story.

If the execution of the story is underwhelming, so is Hitchcock’s use of the camera. In his previous film, Rope, Hitchcock constructed the film with a series of ten-minute long takes designed to blend seamlessly to give the illusion of a real-time experience. Though Rope was not a major hit upon its original release, it’s a fascinating film that has grown in stature since. The use of a single set, combined with the illusion of that story unfolding in real time, gives the film a wonderful sense of claustrophobia that gives its characters and story additional credibility. With Under Capricorn, Hitchcock again used long takes, but here the technique is a mismatch for the material. With Under Capricorn taking place over a longer period of time and in a variety of locations, Hitchcock doesn’t attempt to give the proceedings the illusion of being captured in a single take. As a result, the film’s pacing seems off as it switches back and forth from more conventional shooting and editing techniques to longer single takes. In Rope, the technique is spellbinding; in Under Capricorn, it contributes very little to the finished product. (One wonders what might have happened had Hitchcock continued to refine the technique in future films.)

Working with substandard material and uninspired direction, the cast does their best, but are left with little to work with. Ingrid Bergman seems miscast; try as she might, it’s difficult to accept her as the Irish girl her character is meant to be. Joseph Cotton fares somewhat better as her husband, but he’s given precious little to do other than scowling and appearing grumpy. Michael Wilding here is a study in blandness, with his character’s reactions feeling more like a screenwriter’s demands rather than organic developments. Ultimately, the cast did the best they could, but they are underserved by the material.

Under Capricorn is presented in its original theatrical ratio of 1.37:1 (labeled as 1.33:1 on the box art) in what is being billed as a new 4K restoration. On the positive side, the film is generally clean and stable. There are occasional bits of debris and scratches, but these are the exception. There is also some minor color fringing from what appears to be poor registration, but this is also more than exception than the rule. But on the whole, the color is underwhelming, with the film taking on a washed out and almost pastel look at times. It’s certainly watchable, and is almost certainly the best the film has appeared on a home video format, but it feels as if there might have been room for improvement. But with the likely possibility that this could be the last physical media release for this title, fans of Hitchcock will almost certainly be able to overlook these flaws for the sake of being to add the title to their collection.

The monaural audio is presented in the lossless DTS-HD MA 2.0 format, which decoded into the center channel on my receiver. Though the film’s audio is in better shape than its picture, there is occasionally a mild hiss, but nothing that should dissuade a potential buyer. With the exception of a few moments where the music seems mixed a little on the loud side, in general, it’s a balanced mix with well recorded dialogue that is easy to understand.

Optional English subtitles are also included on the disc.

Audio Commentary by Film Historian Kat Ellinger – Ellinger’s commentary is a mixed bag. On the positive side, there isn’t a moment of silence on the track, and Ellinger clearly knows a lot about both the film itself and its place in the filmography of its creators. But while Ellinger is easily able to fill the track’s entire running time with insights, her thoughts are often not organized, as she rapidly bounces from topic to topic. Worse, she frequently goes on tangents about other films unrelated to the one at hand, even spoiling the endings for several non-Hitchcock classics that the viewer may or may not have yet seen. She also takes the point of view that Hitchcock never made a bad film, and her refusal to consider that the possibility that Under Capricorn may be flawed leads to missed opportunities. By being blind to the chance that the film may not be good, she misses the chance to examine and discuss how and why the film came out as it did. While it’s easy to appreciate that Ellinger is a knowledgeable voice, a little bit of organization of her thoughts could have gone a long way.

Hitchcock/Truffaut: Icon Interviews Icon (12:23, audio only) – Legendary directors Alfred Hitchcock and Francois Truffaut discuss Under Capricorn in this interview excerpt, with the help of a translator. The presence of the translation gives the conversation a little bit of a stilted feel, but it’s worth it for the chance to hear Hitchcock expressing his thoughts so clearly.

Cinema Of Signs: Claude Chabron on Alfred Hitchcock (26:42, SD) – This French-language documentary with noted critic Chabron examines Under Capricorn’s place in Hitchcock’s filmography. While Under Capricorn was not well-received in most places, the French critics thought very highly of it. While the vintage critical analysis is worthwhile, the subtitles here are terrible; appearing both too small and with too many words crammed onscreen at once, it can be difficult to follow.

Original Theatrical Trailer (2:04, HD) – The film’s original trailer inaccurately sells the film on the merits of its suspense, ignoring that the film itself is largely a suspense-free drama.

The disc also includes trailers of varying quality for several additional Kino releases: The Paradine Case, Intermezzo, Portrait Of Jennie and The Lodger.

Under Capricorn is a minor Hitchcock work making its debut on Blu-ray courtesy of Kino. Though the master Kino was provided with leaves some room for the improvement, it’s nonetheless better than previous home media releases for this title. In addition to a very watchable but unspectacular transfer, Kino has generously included several vintage bonuses and commissioned a new audio commentary. While the film does not represent Hitchcock’s best work, it is not completely without merit.

You nailed it with this review, Josh. I'm a big Hitchcock fan, but this film has always been underwhelming to me. That was quite unexpected the first time I saw it -- who would have thought a Hitchcock film starring Ingrid Bergman and Joseph Cotton could be so bland? The transfer is definitely an improvement over the old DVD, but is still rather mediocre. I actually thought long and hard about whether to upgrade this one, but ended up pulling the trigger. This time my wife watched the film for the first time, and she too thought the movie was rather dull.

The story is actually good, but considering that both the Cotten and Bergman characters are Irish, the flat mid-Atlantic, slight Southern Cotton accent and Ingrid's Swedish accent doesn't really make total sense.

While its said that the Director is often his greatest critic, in most cases Hitchcock is right on the money when it comes to what he judged as his biggest misfires (IE: this, Jamaica Inn, and Waltzes from Vienna).
B

I have been an Ingrid Bergman fanatic as well as a Hitchcock fanatic since childhood. Having said that, I've never found anything wrong with the performances here, however the film itself invariably suffers in comparison to the two previous Hitchcock/Bergman classics, Spellbound and Notorious.

As for Jamaica Inn, I've always enjoyed it, possibly due to the presence of another of my favorite actresses, Maureen O'Hara, as well as my all-time favorite actor, Charles Laughton, who made everything in which he appeared worthwhile.
Last edited: Jul 11, 2018
You must log in or register to reply here. 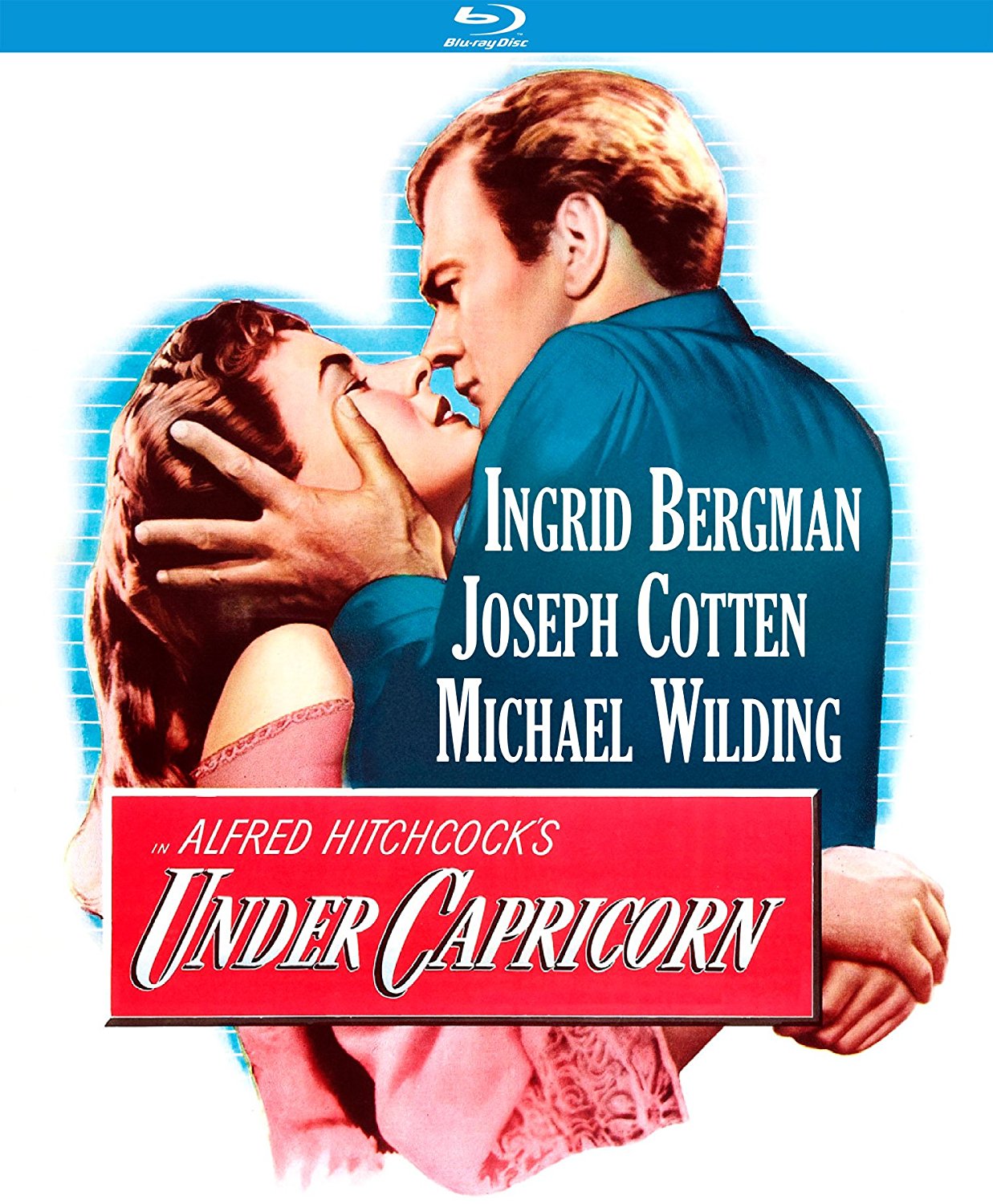