A Hitchcock masterwork with only a moderately appealing video transfer. 4 Stars

Filled with a sparkling cast of actors representing every possible strata of society beset by a seemingly insurmountable problem, Alfred Hitchcock’s Lifeboat offers the pure pleasure of watching a master director at work.

Leave it to Alfred Hitchcock to come up with a thriller both timely and timeless, the 1944 Lifeboat. Filled with a sparkling cast of actors representing every possible strata of society beset by a seemingly insurmountable problem, Lifeboat offers the pure pleasure of watching a master director at work using every possible facet of the mighty studio system during the Golden Age at his disposal to turn out a top flight entertainment which plays as grippingly now as it did at the time of its release. Amazingly, the film wasn’t a box-office success in its day, but it certainly has all the earmarks of a classic now.

After their merchant steamer gets torpedoed by a German U-boat in the Atlantic in 1943, a motley crew of survivors begins to climb aboard a large lifeboat hoping for a rescue at sea. Celebrity journalist Connie Porter (Tallulah Bankhead) is soon joined by stevedore John Kovac (John Hodiak), nurse Alice MacKenzie (Mary Anderson), merchant marine Gus Smith (William Bendix), radio operator Stanley Garrett (Hume Cronyn), millionaire businessman Charles J. Rittenhouse (Henry Hull), steward Joe Spencer (Canada Lee), and a young mother (Heather Angel) whose baby has drowned. And then they’re faced with a decision when a German crew member from the U-boat surfaces: Willi (Walter Slezak). The survivors are split on what to do with the German, but eventually he’s allowed aboard and appears docile despite several secrets he’s hiding from them and his own agenda which he’s carrying out. Tumultuous storms, on board and sometimes deliberate “accidents,” and a lack of food and water make survival increasingly doubtful for everyone except Willi who seems to have unbounded energy and vitality.

Derived from a novella by John Steinbeck, the script by Jo Swerling (with assistance from others) presents the survivors as a microcosm of society: some vain, some humble, some rich, some poor, some bold, some cowardly, some deceitful, and some honorable, and the interesting ways they cope with immediate and far-reaching problems with survival makes for a gripping narrative despite being confined to the lifeboat for practically the entire film. Criticized at the time for not making the characters representing the Allies braver and more resilient, the film was instead exactly what Hitchcock wanted: not a propaganda piece extolling the strength and cunning of our boys but rather an honest and direct declaration that without a united front with everyone working toward one common goal, the enemy was going to triumph which is exactly what transpires in the film’s story. At the time, the German character was thought to be too superhumanly portrayed, but obviously critics weren’t paying attention: he’s treacherous, oblivious to the value of human life (he doesn’t give a second thought to the deaths of several of the characters, even causing one of them), and anything but superhuman (hiding a compass, his knowledge of English so he knew everything they were saying while pretending not the understand, and water and food and energy pills from the others to assume the mantel of superiority). Hitchcock filmed in sequence and wrings every ounce of drama from the personal interactions of the characters as they slowly but surely begin to work as a team.

Tallulah Bankhead won the New York Film Critics Best Actress award for her performance (incredibly, she wasn’t Oscar nominated), and Hitchcock made her earn it, stripping her character of all of her material possessions one by one (camera, mink coat, suitcase, typewriter, beloved diamond bracelet) and inevitably stripping away her class pretensions as well. But the performance of the film belongs to William Bendix as the jovial, baseball loving, jitterbug jivin’ Gus Smith, a beautifully layered and affecting performance that is probably the highlight of his movie career. John Hodiak is a sturdy hulk of machismo as John Kovac. Hume Cronyn’s Cockney accent comes and goes, but his character’s growing infatuation with Mary Anderson’s grounded Alice MacKenzie offers some special moments for the viewer. Henry Hull is full of bluster and bluff as the pompous businessman, and Canada Lee offers a graceful and loving performance as Joe Spencer. Walter Slezak is an excellent villain with the brilliant poker face to mask his treachery, and Heather Angel as the tragic Mrs. Higley adds a real note of poignancy early on.

The film’s 1.37:1 theatrical aspect ratio is faithfully rendered in this 1080p transfer using the AVC codec. Contrary to many of their high definition transfers, Fox hasn’t bent over backwards to restore this film to pristine condition. The first reel is filled with spotting and some scratching along the edges. At its best, it’s very sharp and detailed, and the grayscale can be excellent with deep black levels and impressive whites, but there are problematic spots and bits of debris here and there throughout the presentation. The movie has been divided into 8 chapters.

The DTS-HD Master Audio 2.0 mono sound mix has more than decent fidelity for a film of this period. The dialogue has been well recorded and is always easy to understand even amid the atmospheric effects which sometimes (as during a couple of storm sequences) rise to impressive levels. Hugh Friedhofer has written a main title theme and some end music with a pipe whistle providing the only other musical accompaniment in the movie. Age-related problems with hiss or crackle simply aren’t present.

Audio Commentaries: two are present. Carried over from the DVD release is Dr. Drew Casper’s commentary. It’s less repetitive and breathless than many of his contributions to other discs, but there are also quite a few periods of silence. Better is the new commentary by film historian Tim Lucas who offers more complete information on the careers of the cast and a more thorough analysis of the movie.

The Making of Lifeboat (20:00, SD): Hitchcock’s daughter Pat and granddaughter Mary offer comments on the film as well as the comments by film professors Dr. Drew Casper and Robert Demott.

Hitchcock/Truffaut Interview (11:54, HD): audio from their celebrated interview is paired with clips and stills from the movie.

A Hitchcock masterwork whose physical production remains a masterpiece of direction (for which Hitchcock earned the second of his five Best Director Oscar nominations), Lifeboat still plays beautifully today, its cross section of humanity and gripping story of strife and survival still an engrossing dramatic experience. Highly recommended even with the only moderately admirable video quality of the high definition transfer.

My grandmother told me when I was a youngster that we were related to Tullullah Bankand, after I had expressed interest in seeing Die Die My Darling. She pulled out the family bible tree and showed me the limbs that put her in the distant Aunt category. I asked what she was like. My grandmother looked and said, "well she gave poor William (Senator Bankhead) fits and sleepless nights". And my grandmother never spoke of her again and refused to take me to see Die Die My Darling.

Of course that just peaked my interest and I was a fan ever since.
Expand signature
"Get a director and a writer and leave them alone. That`s how the best pictures get made" - William "Wild Bill" Wellman
Reactions: Steve...O, TravisR and Matt Hough

ahollis said:
My grandmother told me when I was a youngster that we were related to Tullullah Bankand, after I had expressed interest in seeing Die Die My Darling. She pulled out the family bible tree and showed me the limbs that put her in the distant Aunt category. I asked what she was like. My grandmother looked and said, "well she gave poor William (Senator Bankhead) fits and sleepless nights". And my grandmother never spoke of her again and refused to take me to see Die Die My Darling.

Of course that just peaked my interest and I was a fan ever since.
Click to expand... My grandmother said "Tallulah Bankhead ... I didn't even know she was still alive" ...
Expand signature
"What we've got here is failure to communicate"
Reactions: ahollis

She wasn't alive for much longer. This was her final performance.
M

Tallulah got pneumonia twice making this film. Antibiotics were very new in that period and I assume she had them or that might have been the end.

I think Fox lost all elements to the first reel of the film which may account for the poor review of the surviving quality in this Blu Ray. The film came out on a dual Blu Ray/DVD in UK during April 2012 and has a low price compared to the original release price(under ten pounds).

One of the chestnuts of Hollywood film music is Alfred Hitchcock opining that the presence of music in this film would leave audiences wondering where an orchestra was coming from out there on the ocean. 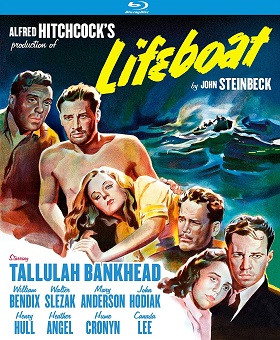