Posted on February 2, 2020 by t1g3r5fan
Scathing look at Hollywood debuts on Blu-ray 5 Stars

During MGM’s Golden Age, few directors were as accomplished as Vincente Minnelli. Minnelli, of course, was one of the studio chief members of their Dream Factory lineup of musicals – An American in Paris (1951) and Gigi (1958) immediately come to mind – and also showed some great range in other film projects. One of his most prominent efforts outside musicals was The Bad and the Beautiful, a scorching look at behind-the-scenes Hollywood and the people who populate it. Previously released on DVD by Warner Bros., the studio has given the movie its Blu-ray debut as part of the Warner Archives line.

One night in Hollywood, top director Fred Amiel (Barry Sullivan), top actress Georgia Lorrison (Lana Turner), and top writer James Lee Bartlow (Dick Powell) are summoned to Shields Pictures to take part in the latest production by Jonathan Shields (Kirk Douglas). All three are quick to turn it down and – in flashbacks – explain to studio boss Harry Pebbel (Walter Pidgeon) why. Each one reveals how Jonathan rose to prominence in Hollywood and how each one was made and used by him as well. It becomes clear that Jonathan got to where he is now by treating nearly everyone he meets and befriends as stepping stones to his own greatness.

A caustic look at behind-the-scenes Hollywood, The Bad and the Beautiful is also luminous and insightful with a dash of wit mixed in as well. Working from a story by George Bradshaw (Memorial to a Bad Man), screenwriter Charles Schnee utilized some of Hollywood’s real life movers and shakers as character traits for our main characters – he ended up with one of the film’s 5 Oscar wins for his work here. Also capturing the glamour as well as the darker side of Tinseltown are collective work of cinematographer Robert Surtees, longtime MGM production designer Cedric Gibbons, and costume designer Helen Rose – each one would also end up with an Oscar. Add in a rich score by David Raksin (one of his finest since 1944’s Laura) and terrific performances by its cast and you have a wonderful and captivating view of the film industry both at its best and its worst. In short, Vincente Minnelli had one of his best directorial efforts with The Bad and the Beautiful, which remains one of the best movies ever made about the movie business.

Kirk Douglas gives one of his best performances as the ambitious yet often ruthless Jonathan Shields; his character can be seen as having traits of David O. Selznick, Orson Welles, Val Lewton, and David Merrick (the latter unknown to audiences at the time of the movie’s release). As Georgia Lorrison, Lana Turner is provided with one of the best roles of her career; her character has said to have traits of Diana Barrymore – the daughter of the “Great Profile”, John Barrymore – and even a few of Judy Garland, but Lana doesn’t do any singing here. Barry Sullivan has a very notable part as the director first noticed then abandoned by Jonathan (a parallel could be made to George Cukor here); Dick Powell has one of his best post-Busby Berkeley musical roles as the screenwriter also used by Jonathan (his part could seen as a reference to Paul Eliot Green, a University of North Carolina professor turned screenwriter). Other performances worth mentioning here are Gloria Grahame as Powell’s flirtatious wife (an Oscar winner for her brief performance), Walter Pidgeon as the Louis B. Mayer like studio chief, Gilbert Roland (in something of a self-parody) as a Latin lover personality, Leo G. Carroll and Kathleen Freeman as, respectively, a demanding British director and his assistant (a clear reference to Alfred Hitchcock and his wife Alma Reville), Ivan Triesault as the director who commandeers the prestige picture originally meant for Fred (clearly a reference to either Erich von Stroheim or Fritz Lang), Barbara Billingsley as the studio costumer, Louis Calhern as the voice of Georgia’s father, and silent film stars Francis X. Bushman and May McAvoy in small unbilled parts (the former making his first film on the MGM lot in nearly 25 years).

The film is presented in its original 1:37:1 aspect ratio for this release, taken from a brand new HD transfer. Film grain is organic throughout with a healthy sheen and fine details rendered faithfully. The gray scale is also given a faithful representation with inky blacks and shadows and next to no instances for print damage (scratches and tears for example) present. In short, this transfer is by far the best the movie has ever looked on home video, surpassing the previous Warner DVD and does full justice to Robert Surtees’ Oscar winning cinematography.

The film’s original mono soundtrack is presented on a DTS-HD Master Audio track for this release. Dialogue is both strong and clear with David Raksin’s lush score given great ambiance and fidelity along with the sound mix. There’s next to no instances of problems like distortion, cracking, or hissing here, which means that this release is by far the best the movie will ever sound on home video – another improvement on the previous DVD here.

Lana Turner…A Daughter’s Memoir (1:26:18) – This feature-length TCM documentary from 2001 looks at the life and career of Lana Turner through her daughter and those who knew her best. Narrated by Robert Wagner and featuring interviews with Kirk Douglas, Jackie Cooper, Robert Stack, Juanita Moore, and Cheryl Crane (Lana’s daughter).

Scoring Session Cues (27:23) – A series of 13 musical cues, taken from the complete David Raksin score for the movie. Each cue can be played separately or played in order.

The lone casualty from the previous Warner DVD is a trailer for the film’s spiritual and unofficial sequel, Two Weeks in Another Town (1962).

As the All About Eve of the movie industry, The Bad and the Beautiful is equal parts scathing and witty but thoroughly entertaining as well. Warner continues its excellent streak of providing high quality Blu-ray releases through their Archive line here, with a transfer that easily surpasses all previous home video releases and carrying over the DVD’s previous bonus features as well. Very highly recommended. 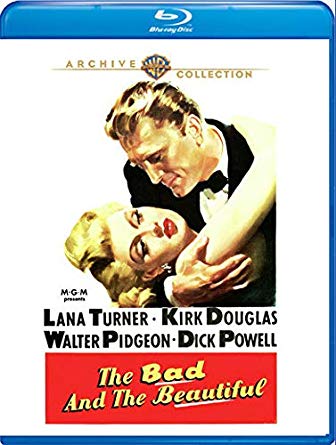