Posted on February 2, 2020 by Neil Middlemiss
Every element of Shutter Island is of the finest quality 4.5 Stars

Martin Scorsese, beyond his gifts behind the camera, has the heart of a preservationist – declared from his love of the magnificent films which inspired and informed who he is today. He is protector, pursuer, pioneer, passenger, and principle of the art-form he so loves. Shutter Island is one of Scorsese’s most commercially successful films globally (behind Wolf of Wall Street) with an almost $300MM gross. Deservedly so. It’s a fascinating mix of good old fashion story intrigue, horror stylings, and all the fine ingredients of a master craftsman at the top of his game.

“I gotta get off this rock, Chuck. Get back to the mainland. Whatever the hell’s going on here, it’s bad.”

Great directors will make art out of disparate sources and an array of talented actors and actresses. They will explore, in their varied and perhaps unrelated stories, the condition of the human spirit and soul, and will find the craft of filmmaking an unquenchable thirst. The truly great directors alive today are precious few. And arguably among the top handful of the very best directors alive and working today we must find Martin Scorsese. Most of us enjoy film as an expression of art; as escapist entertainment, and even as informers and examiners of the world around us. When a filmmaker wields the craftsmanship of filmmaking across stories as bold and raw as Raging Bull, as unnerving as Cape Fear, as unusual and underappreciated as Kundun, as meditative as Silence, or as gritty as Mean Streets, that filmmaker’s mark on cinema is forever etched.

At the core of each of Scorsese’s films is a character or characters we will get to know and understand a little better as they come to know and understand themselves a little better (for better or worse). Sometimes with delicacy, sometimes with brutality; his stories and his characters are mortals of fractured lives in pursuit of a question or an answer veiled as the pursuit of violence, supremacy, revenge, or in the case of Shutter Island, resolution.

In art house films, festival circuit regulars can find the craft of filmmaking without the veneer of commercial pursuit. Scorsese, like a handful of great American filmmakers, has long held both cards; an ability to explore humanity and great stories through the construct of a frame and the flourish of character and dialogue, while assembling, at times, cinematic endeavors of clear commercial viability.

From the opening moments, with the ominous sounds of Fog Tropes, performed by the Orchestra of St. Lukes, and the dark, foreboding simmers of Symphony No. 3: Passacaglia – Allegro Moderato looming in the ears like that niggling sense that all is not right, Shutter Island grips with its superbly crafted atmosphere. It then proceeds to build upon a seemingly simple concept of an investigation into the case of an escaped, criminally insane mental patient from her locked and sealed room, on a secluded and remote Island. It’s an intriguing mystery set on an island, home to a formidable old Civil War fort, withing a large hospital complex housing an assortment of the criminally insane unfit for the standard prison system.

We follow two U.S. Marshalls, Teddy Daniels (Leonardo DiCaprio) and Chuck Aule (Mark Ruffalo), meeting for the first time on this case. They arrive on Shutter Island to investigate the disappearance. During their investigation, they meet with prison/hospital staff, guards, doctors and the nurses, and the somewhat oblique and obfuscating head of the facility, Dr. Cawley (Ben Kingsley). It soon becomes apparent this is no ordinary case, or place. Dr. Crawly appears disarming, but his apparently lack of being forthcoming stirs suspicion in Daniels. Interviews with the criminally insane inhabitants seem to confirm Daniels’ aroused and heightened level of distrust.

In Shutter Island, performances are superb. DiCaprio ,as the tenacious and on-edge Daniels, delivers in scene after scene. We are given flashbacks of Daniels from before he was a Marshall; flashbacks which inform his state of mind, and peer deeper into his state which explains and informs and even spars with what he is thinking, feeling and doing in each present day. In each moment, DiCaprio is entirely immersed in his character and it’s a wonderful reminder of how extraordinary an actor he is.

Playing Daniels’ new partner, Aule, Ruffalo’s is compelling. Almost an apprentice to DiCaprio’s teacher in Daniels, Ruffalo carries himself with authenticity and imbues a sense of trust that will matter greatly as the film unfolds and the mystery begins to shift. Ruffalo may have lit up the big screen playing Hulk/David Banner in the Marvel films, but his true gift in cinema comes from his performances in films like Reservation Road and Blindness. Ruffalo often plays nice guys, imbued with normalcy, until something extraordinary or tragic traps him. In Shutter Island, Ruffalo must stay a step behind the almost truculent and unorthodox investigative of Daniels. And he delivers in that outsider-or-sorts role very well.

Another notable performance in the film comes courtesy of Sir Ben Kingsley, whose passive-aggressive posturing doesn’t demand too terribly much but he still manages to deliver with efficacy. The remainder of the cast includes Ted Levine, Max Von Sydow, Emily Mortimer, Jackie Earle Haley, and Elias Koteas. Each well suited to their roles and fine in their portrayals.

Certainly, Shutter Island, adapted from Dennis Lehane’s bestselling book released in 2003, is immediately an intriguing mystery with a fine cast. Those ingredients alone promise quality from one of the greatest film directors to have ever lived. But the mystery here, and the twist it maneuvers toward, are not merely rote. By the final act, you may feel confident you have guessed the nature of the twist – but by that time, it isn’t really what’s important anymore. The magnificence of Scorsese’s direction and the engrossing narrative offers layer upon layer of compelling questions and answers in with a story which organically grows and moves, resulting in an experience which becomes more about the journey than the destination. This is a film that rewards viewers on repeat viewings.

Every element of Shutter Island is of the finest quality, from the seamless and subtle visual effects work melded with Robert Richardson’s glorious cinematography (Richardson served as Director of Photography on greats such as the Kill Bill films, JFK, Inglorious Basterds, Platoon, and a number of Scorsese’s films, like Casino and Hugo ), to the eccentric and often somber tenor of the music (supervised by Robbie Robertson). The music in particular stands out with selections from Brian Eno, ‘Suite for Symphonic Strings: Nocturne,’ ‘This Bitter Earth’ performed by Dinah Washington, and Max Richter’s emotional ‘On the Nature of Daylight.’

Shutter Island is alive characters who become increasingly complex, in a tale paced with urgency, with cleverly veiled elements in the nooks and crannies of the aged and storm-battered facility. Shutter Island is glorious filmmaking and a delightful and somewhat unusual project in Scorsese’s filmography.

The difference between the Blu-ray and this new 4K UHD release isn’t always as stark as you might expect, though you’ll quickly discover a deeper saturation of colors (various blues and greens in stained glass are far more vibrant in scenes set in the deep brown and deep red-colored rooms). The previous Blu-ray was of fine quality so the leap in the level of detail isn’t always standout, but the overall experience on offer from this UHD release is clearly an improvement. The bright whites that flash over scenes during lightning strikes offer perhaps the most obvious uptick, showcasing superb clarity. Flashback sequences to the war, with snow falling against pitch-black night also showcase nicely what this UHD release has to offer. Black levels are impressive throughout, deeper and inkier than ever.

I wrote the following for the Blu-ray release and it holds up, with all the detail and positives edging up slightly on this new 4K release:

“The almost earthy grey tone of the Island bristles with detail, delivering superb detail while not costing the look of film. The muted tone of the film does not forgo bright greens or elements of richer colors. Interior sequences are extremely well and interestingly lit, so the hospital is awash with whites (though the kind of white of an older, well-used facility) and the cell interiors are dark, deep grays with the heavy presence of black with sharp shards of light. Scenes of exceeding brightness (relative to the story) and rendered beautifully. Flesh tones are very life-like and DiCaprio’s flushed face through the film is just as you would expect a man dealing with what he is to look. This is a top-notch looking disc.”

The audio on offer here is the same available on the original Blu-ray release. Here’s what I said about that release:

With a pristine English 5.1 DTS HD Master audio track (as well as French, Spanish, and Brazilian Portuguese Dolby Digital 5.1 tracks), Shutter Island succeeds in bringing the sense of foreboding, unease, and claustrophobia at times to life throughout the channels. Ample use of surrounds, unafraid use of the deep end of the spectrum (during the storm, ocean and more intense sequences), and clarity throughout all channels conjures a near-perfect audio.

Behind the Shutters (HD) (17:10): After the warning that this extra feature contains important plot details and twists from the film, we are treated to not unexpected, but still interesting, positive comments from the cast. Most interestingly are the comments from Dennis Lehane about the inspiration for writing the book. As the title card warns, don’t watch this until you have seen the film.

Into the Lighthouse (HD) (21:11): Once again, we are treated to a warning about spoilers, we explore the nature of insanity – an interesting peek into the source notions of insanity.

Martin Scorsese, beyond his gifts behind the camera, has the heart of a preservationist – declared from his love of the magnificent films which inspired and informed who he is today. He is protector, pursuer, pioneer, passenger, and principle of the art-form he so loves. Shutter Island is one of Scorsese’s most commercially successful films globally (behind Wolf of Wall Street) with an almost $300MM gross. Deservedly so. It’s a fascinating mix of good old fashion story intrigue, horror stylings, and all the fine ingredients of a master craftsman at the top of his game. 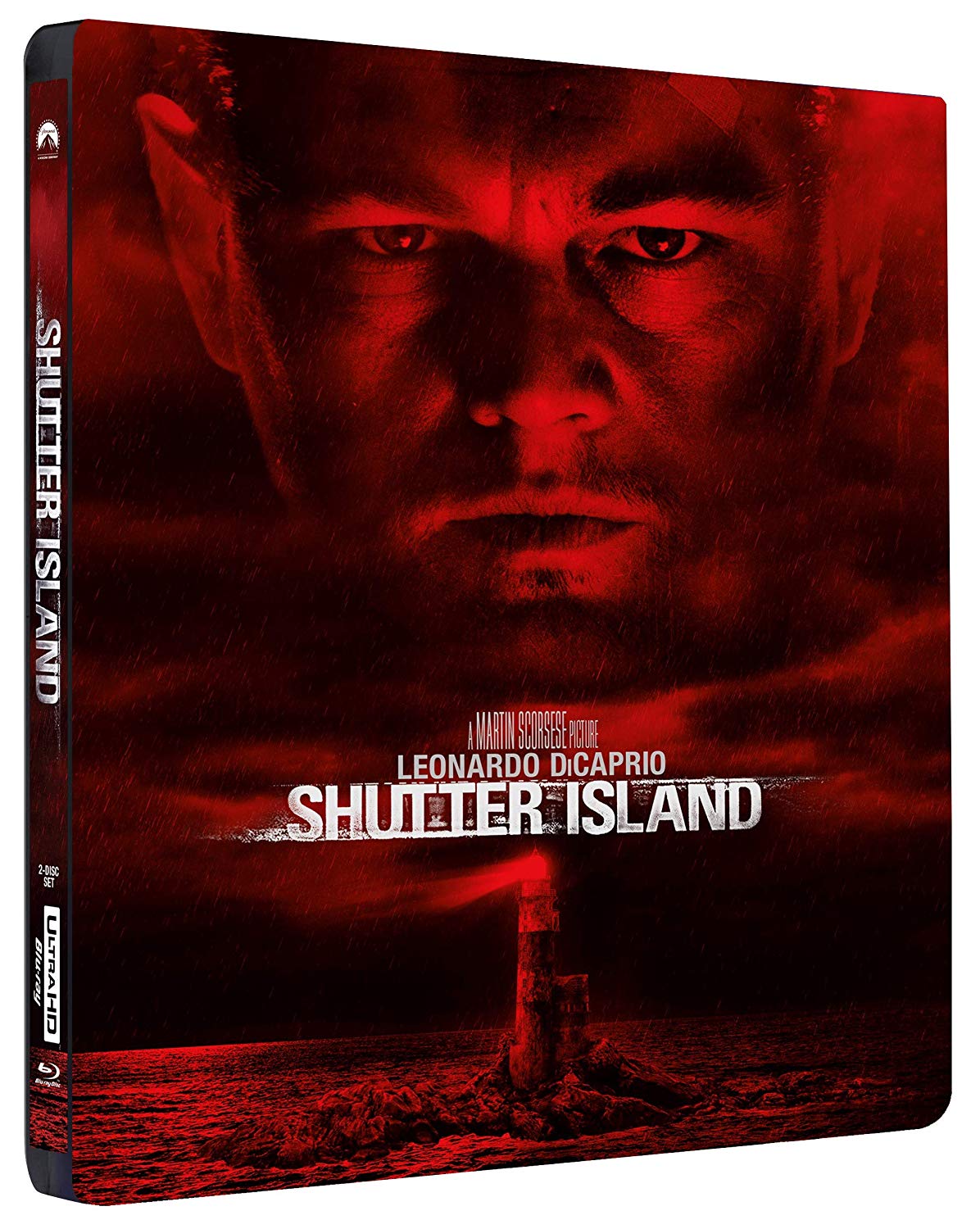