Forum List What's new Dark Style Change width
Log in Register
What's new Search
Menu
Log in
Register
Navigation
Install the app
More options
Dark Style
Close Menu
Posted on January 19, 2020 by t1g3r5fan
You are using an out of date browser. It may not display this or other websites correctly.
You should upgrade or use an alternative browser.
Mankiewicz masterpiece gets the Criterion treatment 5 Stars

Few directors in Golden Age Hollywood were as literate as Joseph L. Mankiewicz. The younger brother of screenwriter Herman Mankiewicz, Joseph paid his dues as a screenwriter and producer for Paramount and MGM before arriving at Fox and getting the chance to direct as well. All About Eve, coming right off of the heels of the success of A Letter to Three Wives (1949), is a acidic look at Broadway and stardom in general. Previously released on DVD and Blu-ray by Fox, Criterion has licensed the film for inclusion in their collection with this brand new Blu-ray release.

One rainy evening on Broadway, Eve Harrington (Anne Baxter) is ushered into the inner circle of famed actress Margo Channing (Bette Davis) through Karen Richards (Celeste Holm). Enchanted by Eve, Margo hires her on as her personal assistant, but quickly starts to realize that Eve’s intentions may not be as innocent as they appear to be. Soon, everyone on the Great White Way will learn all about Eve…

A genuine classic of Hollywood’s Golden Age, All About Eve is a razor sharp drama about Broadway that’s very witty too. Drawing from a real life incident involving actress Elisabeth Bergner, Joseph L. Mankiewicz crafted a stinging look at backstage Broadway while also offering up some splendid ironies about stardom in general. However, Mankiewicz isn’t truly alone in bringing this tale to life; the contributions of cinematographer Milton Krasner, production designer Lyle Wheeler, composer Alfred Newman, and costume designers Edith Head and Charles LeMaire should not be overlooked, as they aid in driving the many wonderful ironies this tale has to tell. Throw in several pitch perfect performances from actors working at the top of their game here and it all melds into one of the greatest films to ever come out of Hollywood in any decade.

In a role that would revive her career, Bette Davis gives one of her most quintessential performances as Margo; her performance allows her to be both dominant as well as vulnerable at the same time. Still relatively fresh off of winning an Oscar for Best Supporting Actress in The Razor’s Edge (1946), Anne Baxter is extremely compelling as the eponymous Eve; her angelic façade masks a steely eyed determination and ruthless ambition to become famous at the expense of others. George Sanders deserved his Oscar as the acid tongued theater critic Addison DeWitt, who also serves as one of many witnesses to Eve’s meteoric rise to fame; Celeste Holm and Hugh Marlowe are notable as the couple who introduce Eve into Margo’s inner circle, only to regret it later on. Also standing out here as Gary Merrill as Margo’s director boyfriend, Thelma Ritter as a former vaudevillian working as Margo’s personal assistant (she also earned an Oscar nomination as well), Gregory Ratoff as a theatre producer, Walter Hampden as the presenter of the Sarah Siddons Award at the beginning of the film, Barbara Bates as the young ingenue who gives this tale its icing on the proverbial cake at the end of the movie, and – in a brief but significant role that would help her career – Marilyn Monroe as a fellow actress.

The film is presented in its original 1:37:1 aspect ratio for this release. Film grain is organic with a healthy sheen throughout and fine details rendered faithfully along with a solid black and white palette. Instances of problems due to age (tears, scratches dust, etc.) are minimal to none throughout; the transfer for this release is similar to Fox’s previous Blu-ray, but this transfer renders the fine details and shadows a little more faithfully, so this release has the slight edge over the previous release.

The original mono soundtrack is presented on a PCM track for this release. Dialogue is strong and clear along with the sound mix; longtime Fox composer Alfred Newman’s score has great fidelity and ambiance rendered to it without intruding on the rest of the elements of the soundtrack. Problems like crackling, hissing, or distortion are next to nil here, which makes this release likely the best the movie will ever sound on home video.

Commentary by author Sam Staggs – Also carried over from the previous Fox DVD & Blu-ray release is the second commentary track, with Staggs offering a more comprehensive look at the making of the movie.

All About Mankiewicz (1:46:45) – This feature length 1983 documentary by Michel Ciment features director Joseph L. Mankiewicz talking about his life career, taken from interviews given in Berlin and his home in New York.

Interview with costume historian Larry McQueen (17:56) – In this new program, McQueen analyzes the costumes designed by Edith Head and Charles LeMaire as well as some insight into how they fit into the story (no pun intended).

Hollywood Backstories: All About Eve (24:21) – Carried over from previous DVD and Blu-ray releases, an episode from the TV series looking at the movies. Among those interviewed (including archive footage) include Bette Davis, Joseph L. Mankiewicz, Celeste Holm, Anne Baxter, Tom Mankiewicz, Rudy Behlmer and Roy Moseley.

The Secret of Sarah Siddons (7:02) – Carried over from the previous Fox DVD and Blu-ray, a look at the real life Sarah Siddons Society in Chicago and its relation to the fictional society depicted in the movie.

Directed by Joseph L. Mankiewicz (26:02) – Another legacy feature from the previous Fox DVD and Blu-ray; this featurette, featuring interviews with Christopher Mankiewicz, looks at the director’s time at 20th Century Fox.

The Real Eve (18:10) – Also carried over from the previous Fox DVD and Blu-ray, this legacy featurette looks at the real life story of the woman who inspired author Mary Orr in her creation of Eve in “The Wisdom of Eve”, the basis for the movie.

1951 Radio Adaptation (59:55) – The Lux Radio Theater adaptation of the movie, with Bette Davis, Anne Baxter, Celeste Holm, and Gary Merrill reprising their roles; the most notable deviation here is the casting of Reginald Gardiner in the George Sanders role of Addison DeWitt.

Booklet feat. an essay by Terence Rafferty and the Mary Orr short story “The Wisdom of Eve”, which served as the basis for the movie

Wildly successful with critics and audiences during its initial Oscar-winning run, All About Eve has withstood the test of time and has become a genuine classic of American cinema. Criterion has provided us a solid release here, carrying over many of the previous bonus features from previous home video editions while adding a few new goodies and a slightly sharper image in comparison to the previous Blu-ray release. In short, this release may just be the definitive edition of the movie on home video.

So are we saying here that Criterion digitally tweaked the already released 4K master? I read elsewhere it’s from the same 4K master and identical.

noel aguirre said:
So are we saying here that Criterion digitally tweaked the already released 4K master? I read elsewhere it’s from the same 4K master and identical.
Click to expand...

There was definitely some tweaking as there are mild differences between the two. I have a personal preference for the fine detail in the older transfer but they're quite close. 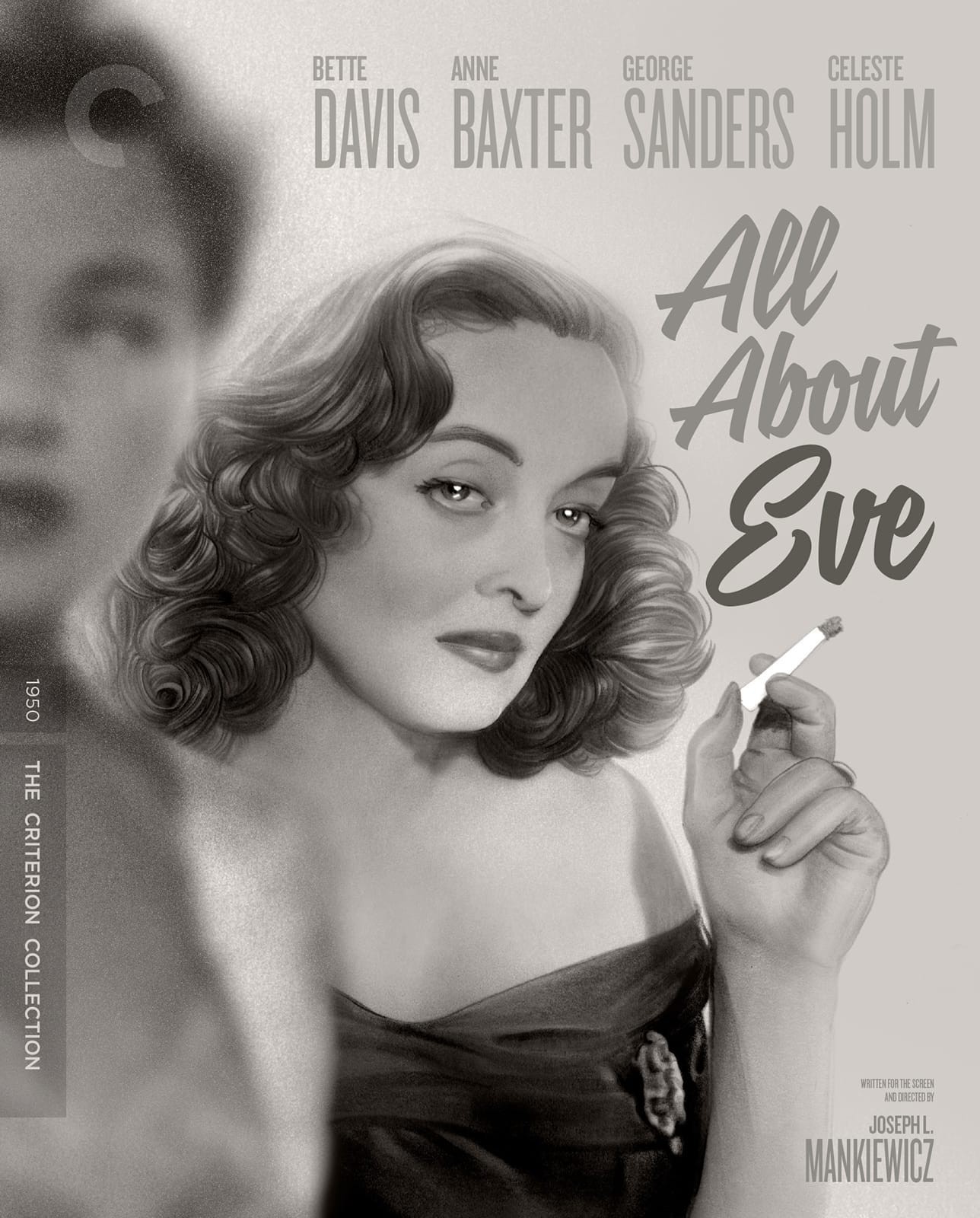