SVS says that the audiophile sound quality is achieved through a combination of true stereo separation from a powered speaker pair of active-passive bookshelf speakers, 200-watt Class-D amplifier, active digital crossover and 192KHz/24-bit DAC. Engineers used the active crossover to control the signal power distributed to each individual tweeter and woofer, resulting in a much broader soundstage with “deeper, more powerful” bass than one would expect from a compact speaker system.

SVS Prime Wireless Speakers can be a powered stereo HiFi speaker system, play on a desktop with a computer or tablet, connect to a TV for home theater sound, or be used as part of a multi-room, whole-home audio system. Users can also leverage multiple connections at once and use the Prime Wireless Speaker System as the primary source of audio playback in a smart wireless audio zone. 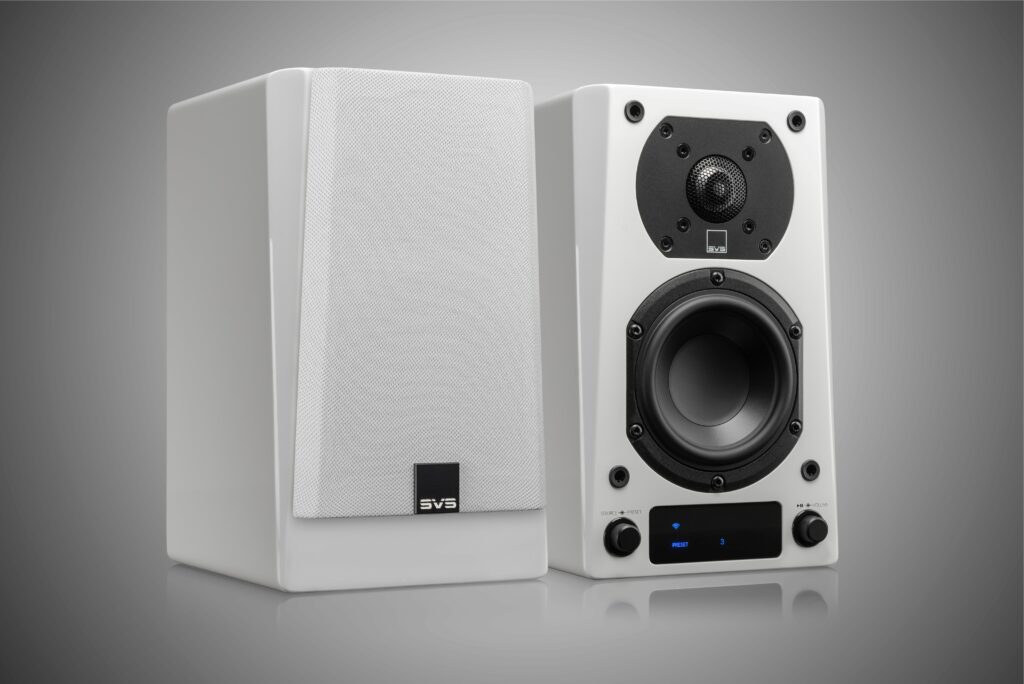 Music, volume and other settings can be adjusted from a prime seat or while moving around using the WiFi connected DTS Play-Fi app. Voice control of music is possible through Amazon Alexa devices for a “hands-free” option when controlling volume, multi-room playback and streaming sources. Dual-band WiFi and Bluetooth with aptX and AAC enable high-resolution wireless streaming from multiple iOS, Android and Windows devices without interruption.

Six front panel presets provide access to a user’s Spotify or Pandora playlists, Internet Radio stations and other streaming music services without needing a phone or tablet, as they stream directly from the home’s WiFi network. Similar to a car radio, users can program the presets and then push the left front dial to toggle between preferred audio content.

The SVS Prime Wireless Speaker System is available in the new Piano Gloss White and a high-end Piano Gloss Black finish. MSRP is $599.99 for the active-passive speaker system or $449.99 for a single Prime Wireless powered speaker.