Producer Peter Jackson’s steam punk YA epic Mortal Engines arrives on Blu-ray with exceptional video and audio, and although not great, the movie is better than expected despite its disastrous box office.

Decades after the 60-minute war devastated Earth, major cities like London have gone mobile, travelling the wastelands on large tractors and wheels searching for raw materials and food sources, laying smaller traction cities and static civilizations in its tracks (quite literally). Thaddeus Valentine (Hugo Weaving), who is in charge of keeping the power going on London, has a deep, dark secret that newcomer Hester Shaw (Hera Hilmar) wants to reveal – that he killed her mother over something she discovered during an archeological dig and left Hester behind, wounded by Thaddeus’ slash to her face. London’s historian, Tom (Robert Sheehan) learns of the secret, and is pushed off London along with Hester by Thaddeus. Hester and Tom soon go on a quest to find London and take down Thaddeus once and for all, but Thaddeus has sent Shrike (Stephen Lang), a resurrected man or Stalker, to fulfill the promise Hester made to Shrike many years ago. In their quest, they are rescued by Anna Fang (Jihae), an aviator who fights for the resistance located at Shan Guo, one of the remaining static civilizations and rumored to be something akin to a Shangri-La oasis. But Thaddeus has plans to consume Shan Guo using an older technology that he has been able to piece together, the very same technology responsible for the 60-minute war.

Mortal Engines is based on a YA novel by Philip Reeve, who also wrote three sequel novels that round out the whole “universe,” and the movie arrives after the YA movie craze has all but died down. While the disappointing box office can be partially blamed on that poor timing, the real problem here is first-time director Christian Rivers and screenwriters Fran Walsh, Philippa Boyens, and Peter Jackson try to stuff too much plot into a two-hour running time (plus 8 minutes of credits), the finished film feeling like reading a Cliff’s Notes version of the novel for anyone (this reviewer included) who hasn’t read the original source material. It also does not help that much of the story and plot devices feel vaguely familiar. The performances are very good, with Icelandic actress Hera Hilmar a strong female heroic lead. Stephen Lang brings some eventual sympathy to his performance capture role as Shrike. The visual effects work by WETA Digital is, for the most part, seamless with the live action photography, which should be expected taking into consideration producer Peter Jackson’s involvement and that director Christian Rivers previously worked as an animation and pre-visualization supervisor and storyboard artist on Jackson’s Hobbit and Lord of the Rings films.

Mortal Engines looks fabulous on Blu-ray. Universal’s 1080p AVC-encoded transfer retains the film’s theatrical aspect ratio of 2.39:1. The film was captured at 8k resolution on RED Weapon Helium cameras and completed as a 4K digital intermediate. Colors are well-saturated and lifelike, never blooming or bleeding. Detail is exceptional, with intricate weaves in fabrics and dents and scratches on the city’s armor replicated with extreme sharpness. Contrast is also exceptional, with deep blacks containing no noticeable crushing yet retaining solid shadow detail. Blu-ray does not get much better than this.

The Dolby Atmos track on Mortal Engines is reference quality and one of the most active Atmos tracks I’ve come across in a long time. When in the bowels of London, you can hear people mulling about all around you plus the sounds of the city’s engines pulsating and changing gears above you. Speaking of pulsating engines, those will likely shake your floorboards with the deep end assisted by the LFE channel and your subwoofer. Yet, dialogue is well prioritized, always understandable without getting lost in the mix.

End of the Ancients (1080p; 3:13): A “fake” introductory video showing many of the highlights in the Hall of Ancient Technology of the London Museum.

Welcome to London (1080p; 26:19): A behind the scenes look at creating the mobile city, presented in five parts – Building the Beast, Levels of London, The Smallest Details, London Museum,  and Medusa and St. Paul’s.

Audio Commentary with Director Christian Rivers: What begins as a lively track where Rivers discusses the making of the film and some of the choices he made eventually loses steam near the half-way mark, with increasing amounts of pauses in his commentary.

DVD Copy: The movie in 480p and Dolby Digital 5.1 audio and all of the above listed special features except Character Series.

Mortal Engines is not quite the disaster the movie’s worldwide box office would lead you to believe, a slightly better film than what most critics gave it credit for. The movie looks and sounds terrific on Blu-ray, and the special features are interesting.

Hope the 3D release raises this above the "meh" level.

Yeah, I've pre-ordered the UK 3D, as it was pretty reasonably priced and it never hurts to have another 3D movie.
Reactions: Radioman970

I just watched my 3D and 2D Blu and can highly recommend the movie. The world created comes to vivid life in 3D and as I watched I was really sorry that I had not seen the movie theatrically.
What ever reason there was for this not being a success, it was not the movie itself.

I'm not sure this was ever going to be a huge hit, but I think the choice of release date was a major miscalculation by Universal. It came out the same weekend as Spider-Verse, and just one week prior to the triple-pack of Aquaman, Mary Poppins Returns, and Bumblebee. It was fighting for recognition among four films with far better-known subjects and it was not going to win that fight. 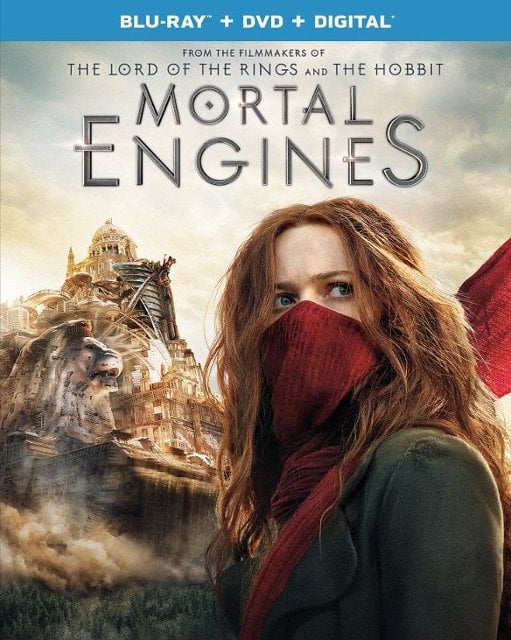