Forum List What's new Dark Style Change width
Log in Register
What's new Search
Menu
Log in
Register
Navigation
Install the app
More options
Dark Style
Close Menu
Posted on March 5, 2019 by Matt Hough
You are using an out of date browser. It may not display this or other websites correctly.
You should upgrade or use an alternative browser.
Unusual comedy-drama that's somewhat unsatisfying in its resolution. 3 Stars

Tay Garnett’s Stand-In is one of the more schizophrenic movies of 1937. A rather brittle mixture of wit, farce, romance, and drama, there are aspects of the movie where pathos is the unwitting tone fighting against the film’s more lighthearted efforts. While the actors do what they can with the topsy-turvy material, there’s a decided feel that for all the movie’s entertainment value, there is more here that has been left unplumbed. Classic Flix has taken this independent production from entrepreneur Walter Wanger and spiffed it up quite nicely pictorially and audibly, but there isn’t anything that can be done give the movie a more balanced mood or smooth out some of its very rough edges.

Eager to get back at least half of its $10 million investment in Colossal Studios, New York bankers led by the bullheaded Mr. Pettypacker (Tully Marshall) send their top accountant Atterbury Dodd (Leslie Howard) to Hollywood to ascertain whether the out-of-control studio can be salvaged or should be sold for half its worth. Dodd is unaware that the studio is being sabotaged by the overspending on the epic potboiler Sex and Satan and the general incompetence of its egotistical director Koslofsky (Alan Mowbray), top star Thelma Cheri (Marla Shelton), and loudmouth PR flack Tom Potts (Jack Carson) so that movie mogul Ivor Nassau (C. Henry Gordon) can swoop in and take over yet another independent studio. The only people at the studio who seem to care about its staying in operation are the film’s frustrated producer Douglas Quintain (Humphrey Bogart), who often gives in to his dependence on alcohol after being thwarted both in love and in business, and Lester Plum (Joan Blondell), once a popular child star but now reduced to being a stand-in for the vainglorious Cheri. Dodd’s ignorance about the movie business and his naiveté in all matters involving emotions cause numerous problems for him as he tries to get to the bottom of the studio’s financial woes, but when Miss Plum offers to guide him through the Hollywood jungle, there may be a chance he can figure out what would be best for all concerned.

Clearly it’s Hollywood satire that’s being attempted by screenwriters Gene Towne and Graham Baker, but frankly other films set in Tinsel Town during this same period of the 1930s or somewhat earlier (Show People, What Price Hollywood, A Star Is Born, Bombshell) are much more pointed and successful in their view of the industry. Where this film might have forged a new path would have been to focus on the show business wannabes at Mrs. Mack’s Boarding House (a silent star reduced to being an extra in a remake of one of her hits, a character actor born to play Abraham Lincoln waiting for his call to stardom, vaudeville acts hoping for that big break), truly a poignant reminder of the way show business can chew up talent and then spit it out. Instead, we get painfully obvious scenes of a ridiculous spoiled (massively untalented) star and a pretentious director making outrageous demands on the studio (and being allowed to get away with it: the screening of her epic Sex and Satan is one of the more painful movie-within-a-movie sequences ever shot). Better are Lester’s attempts to bring Dodd down to earth (dance lessons, a jujitsu demonstration), and the funniest sequence in the movie as a twinkling moppet who wants to be the next Shirley Temple puts on a show audition for Dodd accompanied by her stage mother on a harmonica. Director Tay Garnett handles it all with a sure hand, and the film’s ninety-minute running time won’t tax one’s patience even if the resultant mood of the piece seems more manufactured than true-to-life.

This isn’t the kind of role that would normally have gone to the dry, droll Leslie Howard (Cary Grant might have made a more felicitous piece of casting: he played something of the same kind of part the next year in Bringing Up Baby), but he does well enough taking punches to the eye and tomatoes in the puss. Joan Blondell is an attractive co-star with her character’s photographic memory and her willing spirit even if she’s saddled with some tiresome romantic frustration that could have been eased by simply saying what was on her mind. It’s nice to see Humphrey Bogart not playing a gangster at this stage of his career and still a few years away from his superstardom, but his character’s role needed some fleshing out in the script. Alan Mowbray, C. Henry Gordon, and Jack Carson do as much with their obnoxious characters as they can, and Marla Shelton shows her acting gifts by doing fine in the narrative scenes and simply hopelessly as the actress in her big film.

The film is presented in its original 1.37:1 theatrical aspect ratio in 1080p resolution using the AVC codec. While the image isn’t super sharp, it is quite pleasing with the film’s grain structure respected throughout and only a few white and black scratches which mar occasionally the viewing experience. Reduction of dirt, damage, and dust specks has been a massive undertaking (the bonus feature comparing before and after shots is quite revelatory on this front) resulting in a very pleasurable grayscale image with black levels very good indeed. The movie has been divided into 19 chapters.

The transfer offers the soundtrack in DTS-HD Master Audio 2.0 mono. While most of the track is clear and nicely expressive, there are occasional scenes where hiss and crackle have only been reduced but not completely eliminated, a little jarring to the ear when it occurs. Otherwise, dialogue, Rex Rommell’s music, and the sound effects are professionally mixed into a single track.

Restoration Comparison (5:18, HD): split screens and side-by-side frames show the before and after of the restoration efforts needed for this title.

Classic Flix Trailers: Blondie (TV series), Down Three Dark Streets, Raw Deal, Tomorrow Is Forever, and Merrily We Live, the latter of which also automatically launches when the disc is inserted and cannot be ended by next chapter or menu buttons.

Classic Flix has provided movie fans with another lesser known dramedy from the 1930s, Tay Garnett’s Stand-In. With three top stars doing fine, somewhat atypical work and an admirable restoration from less than stellar elements, Stand-In is a movie that should be better known and now is in good enough shape to accomplish that aim. 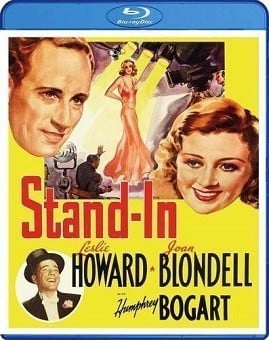