Seven months ago when J. J. Abrams’ Star Wars: The Force Awakens premiered on Blu-ray, there were many disappointed fans who weren’t going to be able to relive their 3D theatrical experience in their homes since Disney was only releasing the movie in 2D. Now Disney has made good on their promise of an upcoming 3D release with the latest 3D Blu-ray incarnation of the film.

Seven months ago when J. J. Abrams’ Star Wars: The Force Awakens premiered on Blu-ray, there were many disappointed fans who weren’t going to be able to relive their 3D theatrical experience in their homes since Disney was only releasing the movie in 2D. Now Disney has made good on their promise of an upcoming 3D release with the latest 3D Blu-ray incarnation of the film. To take some of the wincing away from the double dip, Disney has also included a director’s commentary and about forty-five minutes of additional bonus features while including in the package all of the previously released bonuses including a DVD and a digital copy. While the 3D offers an expansive feel to the original release and some perhaps more immersive visuals in certain instances, there is certainly nothing earth-shattering about the film in 3D for the average moviegoer. Those who insist on recapturing their original theatrical experience at home, however, should feel more than satisfied with this new release.

A scrappy scavenger Rey (Daisy Ridley) and a First Order Storm Trooper Finn (John Boyega) who has bolted from the ranks get drawn into the latest plot of the reigning evil power First Order to destroy planets hostile to their takeover and once and for all wipe away any vestiges of the Resistance and the Force. To do that, they must find the long vanished Luke Skywalker (Mark Hamill), but the only one who has a map of his whereabouts in the galaxy is a rogue pilot Poe Dameron (Oscar Isaac) who has hidden the map on a drive inside tiny droid BB-8. Supreme Leader Snoke (Andy Serkis) has commanded General Hux (Domhnall Gleeson) and his enforcer Kylo Ren (Adam Driver) to do anything and everything possible to carry out his orders by using their immense weapon of mass destruction, but Rey and Finn join up with the Resistance still being overseen by General Leia Organa (Carrie Fisher). Also coincidentally getting brought back into the fight, some for reasons personal as well as professional, are Han Solo (Harrison Ford), Chewbacca (Peter Mayhew/Joonas Suotamo), and C-3PO (Anthony Daniels). Rey especially feels a kinship to the Rebels and begins to sense that the Force is indeed within her.

Director J.J. Abrams created the screenplay along with screenwriters Michael Arndt and Lawrence Kasdan (who helped fashion the best of the Star Wars films The Empire Strikes Back), and they’ve created a story that is at once both familiar and fresh. We’re going to have a heroine as the focal point of this trilogy, and yet there is much about the character of Rey that is as wide-eyed and full of wonderment as Luke Skywalker was in the first two films of the original trilogy while retaining his fighting spirit and search for the truth. If many of the characters retain similar paint strokes to original characters in the first three films: Poe’s confidence is similar to Han’s, Snoke’s sneering evil is a carbon copy of Palpatine’s, Ren’s dark suited menace a younger but similar force to Darth Vader’s, we do have Finn’s renegade Storm Trooper (who was trained as, of all things, a sanitation worker) that’s a new presence and energy in the story. Similarly, those who loved the Millennium Falcon or the light sabers or the different wing ships and destroyers and Death Star as well as the cantina with its colorful collection of aliens won’t be disappointed by this new effort in the least. Director J.J. Abrams keeps the story moving at a fast clip and stages all of the space dogfights and attacks on the new Death Star to keep viewer interest maximized, and he uses some of the same old-fashioned narrative crawl, wipes, and iris ins that George Lucas employed in his original movie while also retaining John Williams to write the stirring score and many of the same sound designs originated by Ben Burtt that give this film the familiar sounds of the originals.

The four younger members of the cast all do first-rate jobs establishing characters that we’re certain and eager to see in the upcoming sequels: John Boyega as Finn, Daisy Ridley as Rey, Adam Driver as Ren, and Oscar Isaac as Poe. Of the older generation, Harrison Ford takes the major portions of the spotlight as the older but unfazed by time Han Solo, his quips as fast as ever and his chummy relationship with Chewbacca as fast and feisty as ever. Carrie Fisher isn’t as smooth and effortless as her older co-star in recreating her original role of Leia, but there’s warmth there and genuine affection with Ford’s Han joined as they are by a shared regret that’s one of the film’s surprise revelations. Lupita Nyong’o gives a wonderful motion-capture performance as cantina owner Maz Kanata, and Domhnall Gleeson is imperious and properly unctuous as General Hux. Max von Sydow pops in for an early visit as Lor San Tekka, and Mark Hamill has a few quiet moments as the elusive Luke Skywalker, the years turning him into almost an Alec Guinness clone.

The film is presented in its theatrical 2.40:1 aspect ratio and is offered in 1080p resolution using the MVC (3D)/AVC (2D) codec. Shot on film, the imagery here is very sharp and very inviting with exceptional detail while color quality is superb with especially inviting skin tones. Black levels are first-rate while contrast is exceptionally consistent to produce a reference quality picture. The movie has been divided into 50 chapters.

The 3D conversion has been smoothly realized, and it’s best experienced in scenes where the camera is looking down from on high greatly expanding the depth of what is being photographed. The desert expanses are certainly magnified with the use of 3D, and there are compositional elements which occasionally delight the eye (though not consistently so). A couple of short moments offer some brief forward projections (a rod from a speeder, the pointed end of a cruiser suspended in space), but some scenes which one might expect to be dazzling in 3D (like the space dogfights or the climactic lightsaber duel between Rey and Ren) don’t really seem more fully present than they were in 2D.

The DTS-HD Master Audio 7.1 sound mix is exactly the reference quality immersive aural experience one expects from a Star Wars film. Dialogue has been exceptionally well recorded and has been placed in the center channel. John Williams’ Oscar-nominated score fills the fronts and rears with melodies both familiar and enticingly new, and the atmospheric effects pan across and through the soundstage continually to match the dogfights, explosions, creature sounds, and other expected noises common to the franchise.

There are no bonus features on the 3D disc.

Audio Commentary: J.J. Abrams provides a chatty hodgepodge recollection of anecdotes and feelings in his commentary track, the only bonus feature on the 2D Blu-ray feature film disc enclosed in the case.

Deleted Scenes (6:39, HD): three additional deleted scenes have been added to the six which were previously included on the earlier release.

Foley: A Sonic Tale (4:02, HD): Denise Thorpe, who heads the Foley unit, introduces us to some of her new Foley artists who are being guided by her: Ronni Brown, Andrea Gard, and Kim Patrick in fashioning the sound effects for the movie.

Sounds Of The Resistance (7:15, HD): sound editor Matthew Wood introduces us to sound masters Ben Burtt and Gary Rydstrom along with other members of the sound team David Acord and Andy Nelson as they describe their work on the epic.

Dressing the Galaxy (6:27, HD): costume designer Michael Kaplan discusses his conceptions for the wardrobe for several of the primary characters followed by comments on the clothes by director J.J. Abrams and actors Adam Driver, Daisy Ridley, and Harrison Ford.

The Scavenger & the Stormtrooper (11:45, HD): actors Daisy Ridley and John Boyega share memories of auditioning for the movie, arriving on the set, and appearing with legendary actors from the franchise.

Inside The Armory (8:17, HD): props master Jamie Wilkinson discusses the fashioning of the weaponry and other props for the movie. Comments on the props are made by J.J. Abrams, Adam Driver, John Boyega, and Mark Hamill.

The Table Read (4:01, HD): Cameras record Mark Hamill reading the stage directions and the entire company taking part in their first gathering together going through the script.

Crafting Creatures (9:34, HD): Creature Effects creator Neal Scanlan introduces us to the various means utilized to create the creatures of Star Wars. Included are the actors who voice the characters and the puppet masters who control the puppet and animatronic creatures in the movie.

Building BB-8 (6:03, HD): Writer-director J. J. Abrams shows his original drawing of the new droid for the movie, and we then meet Matt Denton who is in charge of electronic design and puppeteers Brian Herring and Dave Chapman and actors Anthony Daniels, John Boyega, Daisy Ridley, and Oscar Isaac who interact the most with the creation in its various incarnations.

ILM: The Visual Magic of the Force (7:55, HD): Producer Kathleen Kennedy along with director J.J. Abrams praises the various departments of ILM who created the visual effects for the movie. Special effects supervisor Ben Morris also adds some comments.

John Williams: The Seventh Symphony (6:51, HD): the Oscar-winning composer comments on his delight in being able to once again add his voice to the film while behind-the-scenes shots show him conducting the orchestra and being praised by director J.J. Abrams for his efforts.

Force for Change (3:22, HD): Kathleen Kennedy discusses the use of Star Wars for charitable initiatives with this film’s donations being given to Unicef.

After a wait of seven months for this new 3D edition, Star Wars: The Force Awakens once again brings the universe of these beloved characters and stories alive with a swiftly paced and involving adventure that reboots the franchise joyously with enough mix of the familiar and the novel to please most movie fans. Recommended! 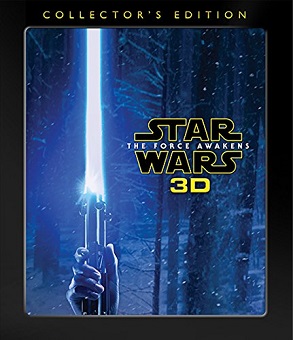