Forum List What's new Dark Style Change width
Log in Register
What's new Search
Menu
Log in
Register
Navigation
Install the app
More options
Dark Style
Close Menu
Posted on November 6, 2016 by Matt Hough
You are using an out of date browser. It may not display this or other websites correctly.
You should upgrade or use an alternative browser.
Excellent film noir stands up well to the test of time. 3.5 Stars

I Wake Up Screaming is a first-rate film noir: a murder mystery with top-flight actors, an intriguing story, and solid direction to put it across.

Bruce Humberstone’s I Wake Up Screaming established a number of firsts including being Fox’s initial film noir (and among the earliest of the genre ever produced) and Betty Grable’s first dramatic starring role, but the film itself is the thing, and it’s a crackerjack noir thriller with a superb cast and an involving story interestingly told. All these decades later, it still holds up beautifully, its deep shadows and melancholy narrative spelled by a sweet romance that takes some of the edge off the sad story and some nasty characters who surround it.

Rising celebrity Vicky Lynn (Carole Landis) is found murdered and suspicions fall on the three men who took her from being a lowly waitress to one of the Big Apple’s most photographed faces and a pending Hollywood contract: sports promoter Frankie Christopher (Victor Mature), gossip columnist Larry Evans (Allyn Joslyn), and fading stage actor Robin Ray (Alan Mowbray). While Vicky’s sister Jill (Betty Grable) isn’t sure who killed her sister, she’s fairly positive that it wasn’t Detective Ed Cornell’s (Laird Cregar) leading suspect Frankie Christopher, but Cornell is so insistent that he’s right that he begins a stalking and intimidation campaign to either catch Frankie in a lie or make him confess.

Screenwriter Dwight Taylor has done a first-rate job adapting Steve Fisher’s novel breaking up the book’s linear narrative into a series of flashbacks that take us several times from present to past and back as we garner bits and pieces of the personalities of all of the major suspects. Director Bruce Humberstone begins exceptionally with twin interrogations as we get parts of the story told from the points of view of both Frankie and Jill where there’s a meet cute between Frankie, Larry, and Robin with Vicky (though no romance established with any of them – it’s all business with her) and taking us quickly through her rising star in New York until her murder on the eve of her departure for Hollywood. The mystery element of the story is an excellent one with a handful of prime suspects who get eliminated one by one leaving only Frankie standing over the body of the dead girl even though he swears his innocence, and the denouement is more surprising than one might expect. In between the mystery, we get a fairly lengthy middle section that explores the blossoming romance between Jill and Frankie as they attend the fights, go to her first nightclub, and even take in a midnight swim and an all-night movie (though the latter is more of a police dodge than part of their romance). In making the hulking Ed Cornell the relentless presence standing in the way of Frankie and Jill’s happiness, it’s necessary for Taylor’s script to forgo the niceties of legal search warrants and probable cause, but that’s really the only major lapse in an otherwise tightly written and swiftly directed noir thriller.

Victor Mature offers one of his best-ever performances as the freewheeling Frankie, almost constantly under suspicion by the cops but never shedding his basically good nature or outsized personality. Betty Grable’s solid work as the sister (with only the tiniest bit of singing and humming to suggest she belonged to the world of musicals) makes one wish Darryl Zanuck had taken more chances to put her in dramatic genre pieces such as this one. Carole Landis gets the most out of her fairly limited screen time as the beautiful, tragic Vicky Lynn (we see at one point her Hollywood screen test which reveals a nice singing voice suggesting Fox should have put her in more musicals). Laird Cregar, of course, dominates all his scenes as the imposing Ed Cornell, hulking in mass with a higher-pitched, softer voice than one might expect with a man his size making him all the more menacing. Allyn Joslyn and Alan Mowbray are both just fine as fellow New Yorkers with their own agendas, and it’s great to see Elisha Cook Jr. as the apartment house desk clerk in the same year he’d be so memorable as the gunsel in The Maltese Falcon. William Gargan is strong as another police detective, and Morris Ankrum scores some good points as the district attorney eager for a viable suspect. Mae Beatty as a society matron, Chick Chandler as a wise-cracking reporter, and Charles Lane as a florist all contribute their usual professionalism to the cause.

The film’s 1.33:1 theatrical aspect ratio is faithfully produced in this 1080p transfer using the AVC codec. Sharpness is excellent here, and the grayscale features really deep black levels and clear, clean whites. Contrast has been applied consistently making for a first-rate picture. There are occasional dust specks, a bit of flicker, a slight scratch or two, and a bit of jumpiness in the image, but there is nothing which impedes one’s enjoyment of the movie. The film has been divided into 8 chapters.

The DTS-HD Master Audio 2.0 mono sound mix has a few problems though most of the audio track is smooth and clear. At reel changes, there tends to be some scratchiness on the soundtrack followed by a bump or two, and one can catch occasional noise and soft hiss in later portions of the movie. Cyril Mockridge’s amalgamation of Alfred Newman’s “Street Scene” and Harold Arlen’s “Over the Rainbow” as the major background elements of the score won’t go unnoticed. Dialogue is clear throughout.

Audio Commentary: noir historian Eddie Muller does his usual fine job providing background on the contributors before and behind the camera and offering opinions on the movie throughout with almost no silent passages.

Image Gallery (3:32, HD): a montage of stills and poster art for the film.

The liner notes mention an alternate title sequence (when the film was called Hot Spot), a deleted scene, and alternate ad campaigns, but they are not present on the disc.

I Wake Up Screaming is a first-rate film noir: a murder mystery with top-flight actors, an intriguing story, and solid direction to put it across. Kino’s Blu-ray release offers fine video quality and decent audio for elements of this age and comes with a solid recommendation. 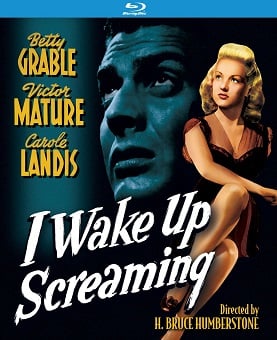