A striking, fact-based story of murder treated in a more strident fashion and less as a thriller or melodrama, Elia Kazan’s Boomerang’s very tone places it in its own rather rarefied atmosphere along with such other docudrama-based noirs as Call Northside 777 and The House on 92nd Street.

Elia Kazan’s 1947 docudrama Boomerang may not have had quite the impact that his other 1947 film had (the Oscar-winning Gentlemen’s Agreement), but its place in the hierarchy of unusual films noir remains unassailed. A striking, fact-based story of murder treated in a more strident fashion and less as a thriller or melodrama, Boomerang’s very tone places it in its own rather rarefied atmosphere along with such other docudrama-based noirs as Call Northside 777 and The House on 92nd Street.

When a kindly Episcopal priest is murdered one night on a Connecticut city street, none of a number of eyewitnesses to the event can offer a clear-cut description of the killer. With public pressure mounting on police chief Robbie Robinson (Lee J. Cobb) to make an arrest, a suspicious drifter John Waldron (Arthur Kennedy) is brought in for questioning having had sharp words with the priest a few days before, and after an intense, brutal couple of days of grilling, finally confesses in a state of hysteria and exhaustion. State’s Attorney Henry Harvey (Dana Andrews) has a fair amount of circumstantial evidence at his disposal but is not sure of Waldron’s guilt. After the head of the local Reform party Mac McCreery (Robert Keith) and leading banker Paul Harris (Ed Begley) make it clear they need him to win the case for the party to remain in power in the town, Harvey even more questions his prime suspect’s guilt.

The Oscar-nominated screenplay by Richard Murphy and Elia Kazan’s straightforward direction (Kazan’s citations for Best Director of 1947 from the National Board of Review and the New York Film Critics cite both Gentlemen’s Agreement and Boomerang) shooting completely on location and utilizing Connecticut locals in bit roles and as background extras retains a documentary feel to the proceedings throughout even with some customary cinematic touches: a series of montages as dozens of suspects are brought into line-up and questioned (look fast and you’ll see playwright Arthur Miller as one of the men in the line-up, all of this right before Kazan and he went to work on staging his next Broadway play Death of a Salesman), pans across the small city’s streets and apartment houses, and the hour-after-hour grilling of Waldron under harsh lights and incessant prodding. Forty-nine minutes in and the preliminary hearing begins with the State’s Attorney pulling a major surprise and spending most of the remaining courtroom scenes presenting his own investigation of the case without the usual array of questions and cross examinations that such trial scenes usually generate. Kazan allows us to see the supposed murderer throughout the trial (the case was actually never solved though the Production Code of the era wouldn’t have allowed for that), and his ultimate end is one of a series of surprises the writer and director spring on us rather unsuspectingly near film’s end.

The movie is filled with Kazan favorites, but that doesn’t include star Dana Andrews whom Kazan didn’t want to use in the drama. Nevertheless, he’s excellent as the unruffled attorney letting his conscience rather than the town’s political machine dictate his behavior. But the array of Kazan regulars really sparks in the supporting roles with Lee J. Cobb wonderful as the determined police chief, Karl Malden as his earnest second-in-command, Sam Levene as a snappy newspaper reporter, and Ed Begley as the corrupt town banker with a hidden reason for wanting the suspect found guilty and dragging in Harvey’s wife Madge (played by Jane Wyatt with faithful devotion) to use as his bargaining chip. Arthur Kennedy’s polarizing suspect John Waldron does a good job remaining an enigma for much of the movie. Chief among the witnesses against him is bitterly scorned Cara Williams as a waitress, an early role for the actress and far away from the comic character she’d become famous for a decade later on television.

The film’s original theatrical aspect ratio of 1.33:1 is faithfully rendered in this 1080p transfer using the AVC codec. While the image is quite sharp, and the grayscale is very good indeed, the black levels aren’t as deep as in the best monochrome high definition transfers, and there is a tiny bit of crushing. Contrast has been consistently maintained for a first-rate image. There is some film damage in a couple of places, but most of the presentation is clean and artifact free. The movie has been divided into 8 chapters.

The DTS-HD Master Audio 2.0 mono sound mix is typical of its era. Dialogue is always easy to understand due to its professional recording, and the spare David Buttolph score and the atmospheric effects are blended with surety with it. There is some very soft hiss in quieter moments on occasion, but there are no attention-sapping aural disturbances to take away one’s enjoyment of the audio presentation.

Audio Commentaries: there are two offered, both covering much of the same material and each featuring the critiques of its individual participants: film historian Imogen Sara Smith in the first and noir specialists Alain Silver and James Ursini in the second.

Boomerang is an unusual noir docudrama with fewer of the tropes of the genre than one might find in more typical noirs of the era. The high definition presentation on this Kino Lorber Studio Classics release is a fine one. 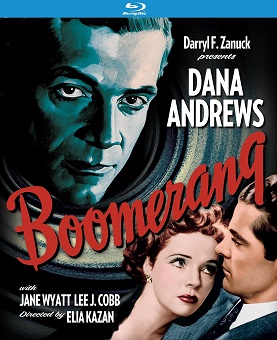