Forum List What's new Dark Style Change width
Log in Register
What's new Search
Menu
Log in
Register
Navigation
Install the app
More options
Dark Style
Close Menu
Posted on October 26, 2020 by Todd Gilchrist
You are using an out of date browser. It may not display this or other websites correctly.
You should upgrade or use an alternative browser.

CBS All Access’ flagship Star Trek series Discovery geared up for Season 3 on October 15, but plans are already underway for Season 4. Although the COVID-19 shutdown delayed production, co-creator Alex Kurtzman (Star Trek Into Darkness) announced in August that the show’s team of writers were able to “get quite ahead in scripts” for the next season, with filming to begin at Toronto’s Pinewood Studios on November 2. Kurtzman indicated that the crew will work in “pods” to minimize the risk of spreading the Coronavirus as they push the acclaimed series forward with new worlds and new civilizations. 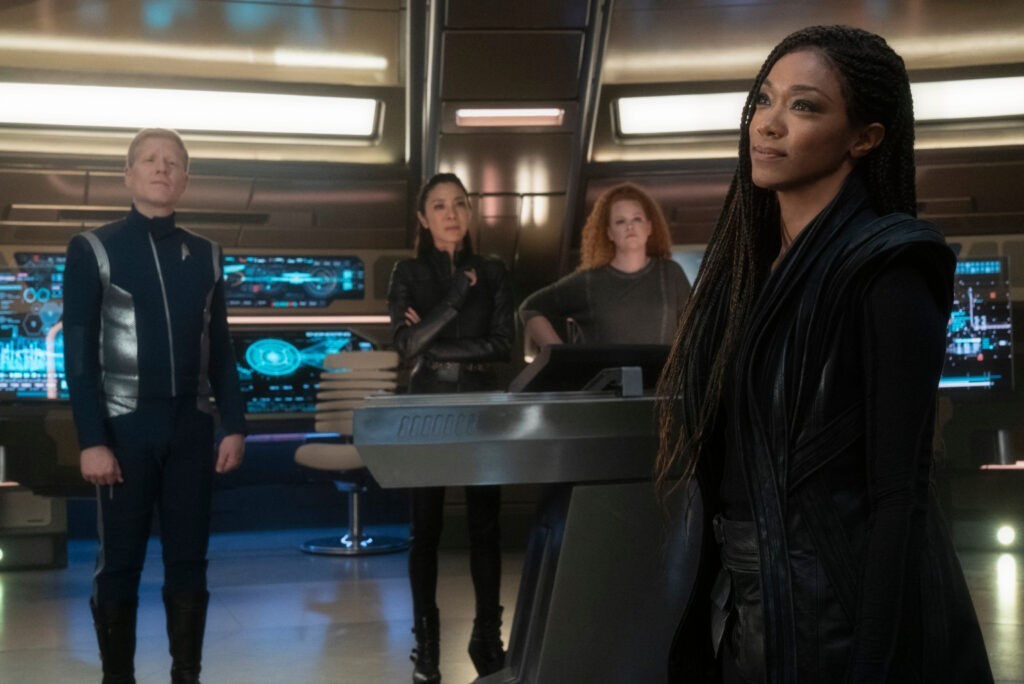 Recurring performers and guest stars for the show have included Michelle Yeoh (Crazy Rich Asians) as Philippa Georgious, captain of the USS Shenzhou, Rainn Wilson (The Office) as Harry Mudd, Tig Notaro (Lucy in the Sky) as Jett Reno, chief engineer of the USS Hiawatha, and Ethan Peck (Eden) as the iconic Enterprise first officer Mr. Spock. He will additionally reprise that role for the upcoming Trek series Strange New Worlds.

Directors for Seasons 1-3 include Kurtzman, Star Trek: The Next Generation star (and Star Trek: First Contact director) Jonathan Frakes, and Akiva Goldsman, who currently works on the other Star Trek series Picard. Along with Discovery, Strange New Worlds and Picard, the latter of which is currently developing its second season, there’s another live-action series in development, the yet-untitled Section 31-related show, as well as two animated series, Lower Decks and the upcoming Prodigy. With more different kinds of stories being told within that expansive, 50-plus-year universe, the Star Trek renaissance guarantees that fans will boldly go – and continue to go – where no one has gone before.

Watch Season 3 of Discovery now on CBS All Access.

Nobody likes Star Trek Discovery.
Nobody.

Everybody has the right not to "like" something, but his post was just petty and troll-like. Could be one of that group of Discovery detractors who have never even watched an episode, or bailed after the first one, but somehow feel the need to constantly post "hated it" in threads they should, presumably, have no interest in.

I like the show. True, it doesn't look like 1964 Star Trek, but really, would anyone (other than some of the long-time fans) take the show seriously if this had the same production design as "The Cage"? Star Trek and Doctor Who fans tend to get hung-up on things that really are pretty minor (and I say this as a long-time fan of both shows myself).

My Name is Nobody.

Doug Pyle said:
My Name is Nobody.

Yes I agree but couldn't resist. Plus, I loved that old Fonda film, wish it was on Blu Ray.

Doug Pyle said:
Yes I agree but couldn't resist. Plus, I loved that old Fonda film, wish it was on Blu Ray.
Click to expand...

Not to derail this thread too much, but My Name Is Nobody was released on Blu-Ray back in 2013. It is available at many retailers.

AndyMcKinney said:
I like the show. True, it doesn't look like 1964 Star Trek, but really, would anyone (other than some of the long-time fans) take the show seriously if this had the same production design as "The Cage"? Star Trek and Doctor Who fans tend to get hung-up on things that really are pretty minor (and I say this as a long-time fan of both shows myself).
Click to expand...

My issue there is that the show starts its timeline before we get to the events of the Cage. However, it Looks Technologically beyond there. Im not saying they have to re construct the 40 acres and raise old sets from the dead but They could make an effort to remember which timeline they're in

Again, I think this thread should be merged with the existing one already in full bloom.

I absolutely love the show. My wife and I go down to our home theatre 15 minutes after 9 every Thursday (so we can ff through commercials), and sit enthralled. It is the fastest 48 minutes of the week. My thought really is "what kind of nut wouldn't love it"?

Why is there a second topic on this show?

TonyD said:
Why is there a second topic on this show?
Click to expand...

I’ve said it twice already. No offense to the OP but this thread is redundant. Especially in this section. What say you @Robert Crawford ?
You must log in or register to reply here.