Forum List What's new Dark Style Change width
Log in Register
What's new Search
Menu
Log in
Register
Navigation
Install the app
More options
Dark Style
Close Menu
Posted on July 16, 2017 by Matt Hough
You are using an out of date browser. It may not display this or other websites correctly.
You should upgrade or use an alternative browser.
Entertaining if familiar action series 3 Stars

Television series based on hit films are nothing new, but it’s a rare television series that spends its entire first season basically remaking the movie on which it was based: Shooter does just that.

Television series based on hit films are nothing new, but it’s a rare television series that spends its entire first season basically remaking the movie on which it was based: Shooter does just that. With a few tweaks here and there with new characters or gender reclassifications for already established ones, this show based on the novel Point of Impact hits all of the familiar bases from the 2007 Mark Wahlberg film (Wahlberg is also one of the show’s executive producers): plenty of action, baits and switches in most of the episodes, and a fairly predictable path to a conclusion of the 10-episode first season.

Decorated Marine sniper Bob Lee Swagger (Ryan Phillippe) is asked by his former commanding officer Isaac Johnson (Omar Epps), now attached as part of the President’s Secret Service detail, to scout the most likely placements for a sniper to take out the President during a Seattle reception for the Ukrainian president. Once Swagger makes his report, he’s shocked to see an assassination take place from a different spot and further dismayed when he’s arrested and charged with the murder, not of the U.S. President but of the Ukrainian leader. All of the surveillance he had done in preparing his report for Johnson now stands as the evidence against him as the shooter. Thus, a tangled web of lies, treachery, and gamesmanship is put into motion with the major players seeming to be Johnson, Homeland Security officer Jack Payne (Eddie McClintock), and a shadowy CIA man who seems to be pulling most of the strings and giving the majority of the orders, Hugh Meachum (Tom Sizemore). But in a conspiracy this large, there are other notable players whose identities aren’t revealed until much deeper into the series’ run.

As in the film, Swagger eventually (though not at first) gains the trust of one governmental official, FBI agent Memphis, changed in the series to a female agent played by Cynthia Addai-Robinson, and she becomes his closest ally in his quest to clear his name. He’s also been given a wife (Shantel VanSanten) and young daughter (Lexy Kolker) because, well, how else will the bad guys inevitably be able to get Swagger to do their bidding without his family to use as either bait or bargaining chips? Each of the plots in the ten-episode run resemble a cross between 24 (with Swagger like Jack Bauer displaying not just expertise as a marksman but also supremely adept at a series of espionage-like tactics – why isn’t HE in the FBI, CIA, Homeland Security, or Secret Service?) and The Fugitive (as Swagger spends the entire series on the run trying to avoid capture by any number of federal agencies for his alleged assassination of the foreign dignitary – though by the last few episodes, his fugitive persona gets set aside when he cleverly fakes his death as he makes his way from Seattle to Spokane, Idaho, Montana, Virginia, and eventually Washington, D.C.). By the end, all of the ongoing drama basically comes down to a race for a flash drive of secret plans and $10 million in diamonds that get passed around to whoever is clever enough to get their hands on them.

As the world class sniper whose emotions are always in check and who can be cool under pressure, the low-key, seldom demonstrative Ryan Phillippe was a fine choice for the role, and he handles himself well athletically and with the various weaponry he finds himself using in nearly every episode (it isn’t called Shooter for nothing). Omar Epps plays a fairly irredeemable character during the first season even though the writers seem desperately to want to backtrack his dastardly behavior by the end of the season and offer him some glory, but it doesn’t ring true. Cynthia Addai-Robinson’s Nadine Memphis makes a lot of irritating rookie mistakes in the early going though she’s more seasoned and reliable by the end of the season. Shantel VanSanten proves for much of the season an adept Marine wife though she crumbles pretty badly by the end, once again seeming to forget the character she’s established in the previous episodes. Bad guys Eddie McClintock (whose smarmy wisecracks make his evil character even more contemptible), Tom Sizemore, Desmond Harrington, and Sean Cameron Michael all excel in their nasty villainy. WWE wrestler Randy Orton and Beverly D’Angelo make notable guest star appearances during the season.

Here are the ten episodes contained on two DVDs in the first season set:

The program’s 1.78:1 television aspect ratio is faithfully rendered on these DVDs anamorphically enhanced for widescreen televisions. Sharpness is good, but color seems to have been drained a bit from the images for dramatic purposes. There is some false contouring in some of the backgrounds, and a bit of line twitter on occasion, but a good upconverting player can offer a fine representation of these ten episodes. Each episode has been divided into 4 chapters.

While obviously not of theatrical width or depth in the soundtrack, the Dolby Digital 5.1 sound mix offers very nice sound reproduction, the equal of the broadcast quality elements. Dialogue has been routed to the center channel, and the driving music and explosive sound effects get a more than acceptable spread where necessary.

The Making of Shooter (7:59): executive producer John Hlavin, stunt supervisor Todd Bryant, and actors Omar Epps, Ryan Phillippe, and Randy Orton discuss their characters on set during the shooting of the episode “Recon by Fire.”

A nicely paced if predictably written action thriller, Shooter brings the book and feature film back to life in the first season of the television series adaptation. The second season, which begins Tuesday, July 18th on USA, should offer some fresh adventures for these overly familiar characters.

TV Movie Titles We'd Unlikely See on Blu-Ray or DVD for That Matter...
2 3

Tuesday at 10:36 AM
Ronald Epstein 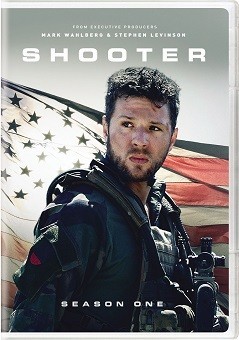