Mike Nichols’ biographical drama Silkwood puts the viewer into the hearts and minds of its central characters telling an increasingly harrowing true story without sacrificing character development, narrative drive, or the building suspense.

Mike Nichols’ biographical drama Silkwood puts the viewer into the hearts and minds of its central characters telling an increasingly harrowing true story without sacrificing character development, narrative drive, or the building suspense. The film was recognized with five Oscar nominations including citations for its director, its script, and its two most important female performers, but the ensemble overall is superb, and the film has clearly stood the test of time remaining as engrossing and as heartbreaking as it ever was.

Karen Silkwood (Meryl Streep) works at Kerr-McGee, an Oklahoma nuclear facility manufacturing plutonium rods, along with her boy friend Drew Stephens (Kurt Russell) and their housemate Dolly Pelliker (Cher). Karen, a dedicated member of the union, becomes concerned about safety practices at the plant, and she begins noting more and more frequently violations that could put workers at risk going so far as to contact union headquarters in Washington for them to offer the workers some protection by coming down hard on management. As her investigation digs deeper and deeper in company malfeasance, Karen is horrified to discover that she has covertly and very suspiciously been exposed to high levels of radiation, likely as a way of derailing her investigations and whistleblowing to the union.

The Nora Ephron-Alice Arlen screenplay doesn’t attempt to solve the mystery of Karen Silkwood’s suspicious end, but it certainly gives us plenty of clues to work with in mapping out for ourselves what likely happened to her. What the script and director Mike Nichols do offer us are a sensational view of life at the plutonium factory: the daily regimens, the close camaraderie they all share until Karen begins doing her Nancy Drew routine to ferret out the company’s dirty secrets, the hazards involved in their jobs, and the decontamination scenario once someone tests “hot.” Nichols builds tension wonderfully the deeper Karen gets into her covert investigation (a moment when Karen is frantically searching through files only to be startled by a coworker will likely make you jump as if watching a horror film), but he never stints on the personal interactions especially between Karen, boy friend Drew, and best friend Dolly along with the people who orbit around them during the course of the story. These touchstones to the film’s humanity are key to most of Mike Nichols’ best work, and here as Karen and Drew go through the ups and downs of their relationship due to her union activities and Dolly drifts in and out of a romantic relationship of her own after watching Drew and Karen’s love match with a note of wistfulness, we can’t help but get drawn into their stories, too: devastated by breakups and hopeful as things seem to be on the mend, at least for some of them.

It’s another triumph for Meryl Streep as Karen Silkwood; she’s completely believable as a blue collar worker caught up in her own sense of duty but terrified at the repercussions as big business seems to take its revenge. Kurt Russell brings his always stalwart presence to the movie as a believable grease monkey overcome by events closing in on the woman he loves. Cher, like Streep, has no problem giving up glamour and artifice to etch a compelling portrait, for her of a lesbian sanitation worker starved for affection. As other factory personnel, Craig T. Nelson, Fred Ward, Sudie Bond (especially wonderful in her few scenes), Henderson Forsythe, Bruce McGill, Will Patton, David Strathairn, some on the side of the union and others on the side of management, all play their roles with distinction. Diana Scarwid has some hilarious moments as Dolly’s short-term girl friend Angela, a mortuary cosmetologist. Josef Sommer and especially Ron Silver as union big shots score in their brief scenes interacting with the various workers.

The film’s original theatrical aspect ratio of 1.85:1 is faithfully rendered in this 1080p transfer using the AVC codec. It’s a very inconsistent transfer, looking in the early scenes rather dated and somewhat soft but occasionally registering good sharpness with a fair amount of detail. Color is nicely managed throughout including believable skin tones. But the transfer runs into problems in most of the nighttime shots and scenes with low level lighting where the appearance becomes murky and too digital but without respectable black levels. The movie has been divided into 8 chapters.

The DTS-HD Master Audio 2.0 mono sound mix is typical for its era of sound reproduction. Dialogue has been well recorded, and the mix with the background score by Georges Delerue (and a couple of haunting renditions of “Amazing Grace” by Meryl Streep) and various atmospheric effects is skillfully produced. Some of the sound effects (like the blaring sirens which go off when someone tests “hot”) display better than average fidelity not particularly evident in other parts of the sound design. There are no apparent problems with age-related artifacts like hiss or crackle.

Michael Hausman Interview (16:03, HD): the film’s producer talks about the film’s production in Texas, working with Meryl Streep and Mike Nichols, and the difficult business of bringing in a film on time and within budget.

A wonderful biographical drama on nuclear whistleblower Karen Silkwood, Silkwood continues to grip the viewer with its fascinating story and superb performances, all directed by a cinema master. The Kino Lorber Blu-ray release offers only decent rather than exceptional visual quality, but fans of the film will still likely want to pick it up. 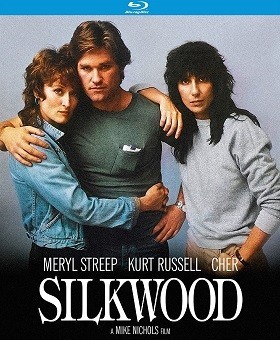