Forum List What's new Dark Style Change width
Log in Register
What's new Search
Menu
Log in
Register
Navigation
Install the app
More options
Dark Style
Close Menu
Posted on November 10, 2016 by Todd Erwin
You are using an out of date browser. It may not display this or other websites correctly.
You should upgrade or use an alternative browser.
One-joke "comedy" that overstays its welcome 2 Stars

They say that the toughest movie to watch is a comedy that isn’t funny. Sausage Party is that and so much more, assaulting the senses with its vulgar language and imagery for an excruciating 89 minutes.

The merchandise at Shopwell Supermarket believe that the customers who come in and purchase them are gods, taking them to the Great Beyond, so much so that they sing a song praising these “gods” every morning before the store opens. Until one day, when a jar of Honey Mustard (voiced by Danny McBride) is returned after being purchased by mistake, he warns the food products that beyond the doors is something dark and sinister before jumping to his death. Frank (voiced by Seth Rogen), a hot dog, escapes from his package of eight and his girlfriend, Brenda Buns (voiced by Kristen Wiig), who has also escaped from her pack of ten, take refuge until the store closes. But his fellow packmate, Barry (Michael Cera), isn’t so lucky, seeing firsthand what their eventual fate is. Barry escapes and returns to Shopwell, in hopes of finding Frank and informing the rest of the merchandise in the store. However, one product has accepted his fate, Douche (Nick Kroll), and will stop at nothing to keep the rest of the store from learning their fate.

For me, Seth Rogen can be hit or miss. Although I enjoyed his earlier work in Freaks and Geeks, Superbad, and Pineapple Express, and his voice work in DreamWorks Animation’s Kung Fu Panda series of films and TV specials, his more recent oeuvre have been major misfires (The Interview, The Green Hornet, This Is the End). His latest pet project, Sausage Party, an adult-themed animated comedy that he has been working on for almost 10 years, continues that trend. The concept may have sounded like a good idea during the pitch phase (a Toy Story that substitutes food for toys), but it’s never fully developed, and instead is nothing more than animated food products dropping F-bombs in at least every other sentence and thinking of nothing but sex, leading to, ultimately, a market-wide orgy once they defeat the humans. I laughed possibly once or twice during the film’s overly long 89 minute running time, but they were so forgettable, that I can’t recall what I was barely laughing about.

Sausage Party was completed as a 2K digital intermediate, and has been upscaled for this UHD release. Unfortunately, since the animation is nowhere near as detailed as something from Pixar, Disney, or even DreamWorks, the differences between the 1080p Blu-ray and UHD are so subtle that most probably won’t be able to perceive them. There is a very minute increase in fine detail, more noticeable in the texture rendering of Frank’s skin, highlighting a few more imperfections that one typically sees on a cheap hot dog. Color gamut is about the same, with the UHD having a slightly more natural appearance; neither are what I would call vibrant by any means. Contrast is minimally better on the UHD, allowing for better details in darker sequences.

Sausage Party was released theatrically with a 5.1 soundtrack (which is included on the 1080p Blu-ray in DTS-HD Master Audio). The UHD contains a remixed Dolby Atmos track (with a Dolby TrueHD 7.1 core). Overall, the Atmos track was a bit more immersive when played back in a 5.1 configuration with additional front heights and Pro-Logic IIz enabled. Dialogue was clear and understandable, directed mostly to the center channel with occasional use of panning where necessary. Surrounds were fairly active, particularly during the opening musical number by placing background singers throughout the room. Heights were engaged where necessary, highlighting atmospheric effects, falling objects, and placing Honey Mustard slightly above and behind the listener during one brief moment of his speech. Not a reference track, but a noticeable improvement over the Blu-ray’s DTS HD-MA 5.1 track.

Good Food Gag Reel (1080p; 7:29): I know what you’re thinking – a gag reel from an animated film? An attempt is made to sync up some of the animated sequences to outtakes from the sound booth, cutting to the actors improvising into a tangent or unable to keep a straight face and breaking out into laughter. It’s really not that funny.

Shock and Awe: How Did This Get Made? (1080p; 5:11): The feature never really goes into a lot of detail, other than they had a difficult time getting the film green lighted at any studio due to its adult nature.

The Booth (1080p; 9:28): Footage from the original table reading and sound booth, plus interviews with the writers and directors.

The Pitch (1080p; 2:33): An archival interview with Seth Rogen and co-writer Even Goldberg from the set of Superbad, where the two first talked about Sausage Party.

Sausage Party was no party for this reviewer, and I cannot recommend it. The only real benefit of the UHD version is the Dolby Atmos soundtrack. Otherwise, fans will probably want to purchase the Blu-ray.

I couldn't agree more with the review. The only 'funny' thing for me proved to be my anticipation and expectation of a smart premise pulled off at a high level. Boy, was I wrong; this thing was tedious, at best. And, make no mistake, I love a good f-bomb--or several--as much as the next guy; I am not easily offended and, in fact, am a fan of 'coarse' comedy--throw all of the f-bombs, scatilogical jokes, politically incorrect humour, or just bad taste nonsense you want, but do the two things all good comedy should do:


Sausage Party was neither. Not even close.

It was boring, immature in the way that denotes lack of experience with or skill in writing (it was as if my weakest students wrote it), and felt like the longest 89 minutes I've ever spent doing anything. Not to mention, it set up several competing main ideas that were never fully resolved and, plainly, just didn't make any sense. (What's worse, is you can feel the abject pride that the writers feel thinking that they've really opened up some real discourse about real topics in this unlikely premise. Put the bong down, boys, and go read a book--learn a few things and, maybe, try again in a few years. Embarrassing.)

Seriously, avoid this. It's amateur-hour level work granted a big budget and a distribution deal. 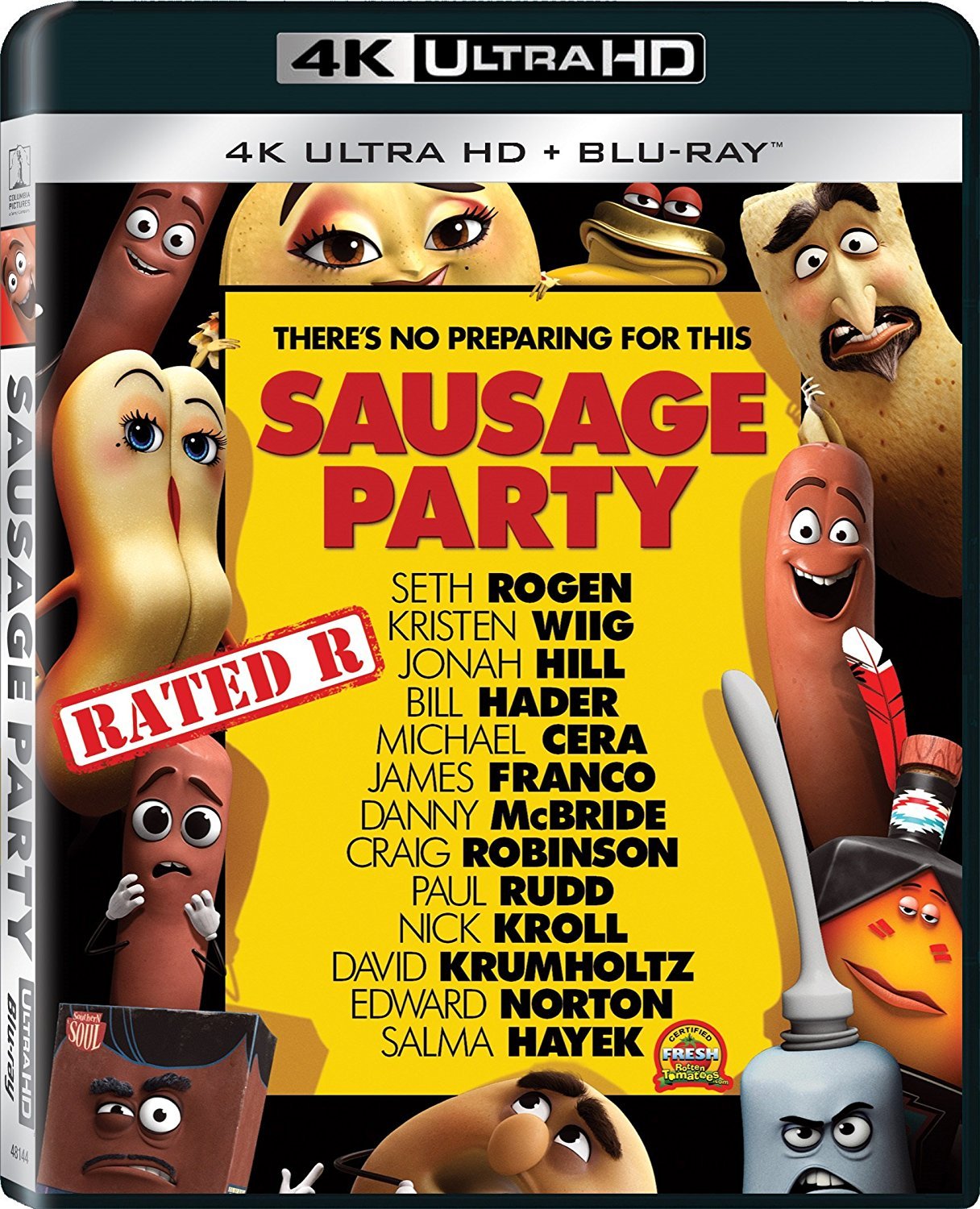