The first American espionage film produced after World War II, Henry Hathaway’s The House on 92nd Street combines elements of documentary, melodrama, and film noir into a most unique cinematic creation. Gathering momentum as it plays, the movie inevitably succeeds both in relating its spy narrative and also in giving us a true inside peek behind the doors of the FBI, a view that future films and television shows would exploit to the maximum. The House on 92nd Street got there first.

Born of German parents, college graduate William Dietrich (William Eythe) is approached by the pre-war Nazis to become an agent for them living in America and sending back to Germany any secrets he might manage to uncover in their attempt to establish the Fifth Column in the United States. Immediately reporting his solicitation to the FBI, senior agent George A. Briggs (Lloyd Nolan) instead enlists the enterprising young man as a double agent, outwardly cooperating with the Nazis but secretly reporting his activity for them to the FBI who would then use his knowledge to uncover hundreds of secret spies and saboteurs on their payroll living in the United States. In New York, the Nazi headquarters is located in a dress shop housed on 92nd Street run by Elsa Gebhardt (Signe Hasso). Through his efforts, it becomes clear that the Germans are interested in obtaining the specifications for Process 97, the American code name for their work on the atomic bomb, and Dietrich’s movements come under suspicion by the American-based Nazis who due to their suspicions send back to Germany to check on his authenticity.

The screenplay by Barre Lyndon, Charles G. Booth, and John Monks Jr. based on an original story by Booth which won the 1945 Oscar uses elements from two true FBI cases of German espionage activity in America during World War II and have amalgamated them into this increasingly gripping narrative as we see Dietrich working slowly and steadily to gain the Germans’ trust and then having his movements come increasingly under suspicion as the noose begins to draw more tightly around his neck. We’re made privy for the first time to actual FBI workspaces: forensic labs, the enormous fingerprint department, screening rooms where hidden camera footage is viewed, and other insider departments which are eye-opening glimpses behind the scenes at the diligence required for information gathered in a myriad of ways to become valuable. And, the film cleverly works in a mystery to its story, too: the identity of the mysterious Mr. Christopher, the top Nazi agent operating in New York, seen only in glimpses of his patent leather-clad feet as he slithers his way through shops and streets doing his dastardly business. Reed Hadley’s laconic narration throughout gives the documentary feel to the story lending it even further semblance of reality, and the drama builds to an exciting climax as Dietrich is taken captive once his subterfuge is exposed and submitted to beatings and truth drugs to get him to reveal his operation. Director Henry Hathaway handles both the dry early expository scenes and the increasingly dramatic denouement with a sure and steady hand.

William Eythe makes for a clean cut, no nonsense leading man, his poker face not betraying much emotion behind his striking façade of American good looks. Lloyd Nolan also plays Agent Briggs with a straightforward, humorless approach to the job at hand. It’s up to the film’s villains to provide the colorful malevolence for the film, and they all deliver in spades: the stylish Signe Hasso who masks her evil with wry sophistication, Lydia St. Clair as Gestapo commandant Johanna Schmidt with a hard-as-nails sneer that can bring chills down one’s spine, Leo G. Carroll as calm and collected Colonel Hammersohn, and Harry Bellaver as Nazi tough guy Max Cobura. Gene Lockhart has an important sequence as a scientist central to the scheme to steal the plans for Process 97, and Bruno Wick, Charles Wagenheim, Alfred Linder, and Renee Carson all do good jobs portraying Nazi hidden agents working for the downfall of democracy. Look fast and you’ll glimpse the young E. G. Marshall in an early role as an FBI trainee.

The film’s original aspect ratio of 1.33:1 is faithfully reflected in this 1080p transfer using the AVC codec. Sharpness is excellent throughout, apart from low quality real FBI footage screened early in the movie to add to its authenticity. Grayscale is certainly up to par with good to excellent black levels marred only occasionally in a couple of low light scenes where age seems to have worn away some of the emulsion. There is an occasional speck of dust and some flicker at odd moments, but on the whole the movie looks very good indeed. The movie has been divided into 8 chapters.

The DTS-HD Master Audio 2.0 sound mix reveals an audio track that is very much a product of its day. The narration and all of the dialogue has been expertly recorded and has been blended with the atmospheric effects and only occasional intrusions of David Buttolph’s very sparse score. Only an occasional click and bump on the soundtrack reveal the age of the movie.

Audio Commentary: noir specialist Eddie Muller offers an entertaining commentary on the film identifying the identities of the major participants before and behind the camera and offering some analysis of the film’s place in or out of film noir consideration.

Animated Montage (3:10, HD): a montage of posters and stills.

Fascinating when viewed in accordance to its place in American espionage films, The House on 92nd Street also relates a most engrossing story and features excellent, unshowy performances, and at 88 minutes doesn’t wear out its welcome in the least. The Kino Blu-ray release looks and sounds very good for fans of the noir and docudrama genres. Recommended! 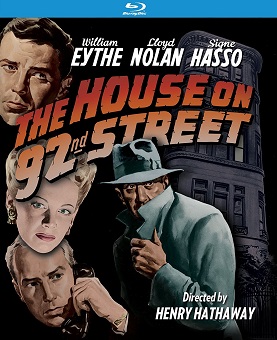