Forum List What's new Dark Style Change width
Log in Register
What's new Search
Menu
Log in
Register
Navigation
Install the app
More options
Dark Style
Close Menu
Posted on November 11, 2016 by Matt Hough
You are using an out of date browser. It may not display this or other websites correctly.
You should upgrade or use an alternative browser.
Post World War II triangle drama is subdued and appealing. 3.5 Stars

Not the typical women’s picture of the era even with Joan Crawford in the title role, Otto Preminger’s Daisy Kenyon spends just as much quality time examining the troubled men in this sophisticated triangle relationship as it does its conflicted leading lady resulting in a film noir with a lot less melodrama than one might have expected.

Not the typical women’s picture of the era even with Joan Crawford in the title role, Otto Preminger’s Daisy Kenyon spends just as much quality time examining the troubled men in this sophisticated triangle relationship as it does its conflicted leading lady resulting in a film noir with a lot less melodrama than one might have expected. This striking 20th Century Fox production may be studio bound with all the excesses of production design that were common in the studio system days, but it nevertheless provides a really fascinating human interest tale with the ending uncertain up until the final few moments of the movie.

Commercial illustrator Daisy Kenyon (Joan Crawford) has a very satisfying professional life, but her current affair with married man Dan O’Mara (Dana Andrews) is proving to be more problematic by the day. When it becomes clear to her he’s satisfied keeping his wife (Ruth Warrick) and two children (Peggy Ann Garner, Connie Marshall) as his stable family unit while carrying on with her separate from them, she begins to look elsewhere for romantic fulfillment. She meets troubled Army veteran Peter Lapham (Henry Fonda), a widower floundering after the war with no wife or career ambitions, and they eventually marry though neither is completely content, each remembering a love which has been lost. Dan had tried to forget Daisy after her marriage, but his need for her is greater than even he imagined, and when his wife eavesdrops on a telephone conversation and misinterprets what she hears, she instigates divorce proceedings naming Daisy as co-respondent, a situation which Dan welcomes only if it will get him Daisy back.

Based on the best seller by Elizabeth Janeway, the script by David Hertz does an excellent job fleshing out psychological inconsistencies in the make-ups of all three protagonists while also keeping each one amazingly audience friendly, a pretty neat trick seeing as how there’s adultery in the mix for two of them and the third character doesn’t seem all that anxious to fight for his marriage. Director Otto Preminger goes for long takes with his actors, keeping cutting to a minimum and forcing the players to really interact with one another constantly within the frame. Of course, one must look past the excesses of the studio system which has a New York loft space the size of Grand Central Station (the law offices, Dan’s home, and a seaside “shack” are also all equally grand), but the important thing here is that these uncertain central characters never follow expected paths of the typical movie melodrama, and it’s a rare person indeed who will see the ending coming before it occurs. Before that happens, however, we’re treated to a lengthy courtroom scene during the divorce proceedings which gives Joan Crawford her requisite chance to emote theatrically (elsewhere, Preminger restrains her tendencies toward overplaying the victim card) while the professional sheen of the studio team is always in evidence.

Though she’s ten years too old for the role she’s playing (a problem which would occur ever more frequently in the next few years of her movie career), Joan Crawford does the best she can under the firm hand of director Preminger and ends up giving one of the most restrained of her “second career” performances. Dana Andrews has charisma to spare as the engaging lawyer who’s a friend to all except his spurned wife and her recalcitrant father (Nicholas Joy) who keeps him on at the firm because he’s a great lawyer and does the work of five men. Henry Fonda underplays in his usual style though his is the least interesting of the three leading roles (it’s possible the part has been underwritten; he’s obviously suffering from PTSD though the term wasn’t in use at the time). As troubled as her husband but for different reasons, Ruth Warrick stays on the verge of hysteria for much of the movie (her character of Lucille also abuses her daughters, off screen, of course, due to the Production Code) and helps us understand a bit her hubby’s roving eye. Martha Stewart has a spotty part as a model who seems very chummy with Daisy. Columnists Walter Winchell and Leonard Lyons make cameo appearances during the Stork Club sequence, and John Garfield can be barely glimpsed sitting at the bar in the same scene.

The film’s original theatrical 1.33:1 aspect ratio is faithfully presented in 1080p resolution using the AVC codec. Density inconsistencies are the primary problems here with some scenes looking smashingly sharp and gorgeously monochrome with excellent grayscale elements and others appearing on the verge of being washed out and lacking luster. Glamour close-ups of Miss Crawford are less crisp, of course, but that’s par for the course. Dirt and scratches are not problems with this transfer. The movie has been divided into 8 chapters.

The DTS-HD Master Audio 2.0 mono sound mix offers a strong track featuring very nicely recorded dialogue (post dubbing in outdoor scenes has been skillfully blended to not be that noticeable) combined with the masterful David Raksin score filled with many musical shades and colors and the atmospheric effects appropriate to the action. No age-related problems with hiss, crackle, pops, or flutter are present.

Audio Commentary: Otto Preminger expert Foster Hirsch offers a fine analysis of the movie pointing out its strengths and weaknesses in a very involving track.

From Journeyman to Artist: Otto Preminger at Twentieth Century Fox (21:18, SD): an overview of Otto Preminger’s career as a Fox contract director, his trouble with Zanuck which led to his firing, and his rehiring during the war and subsequent remarkable career at the studio before venturing into independent production. Contributing to the discussion are Preminger’s daughter Victoria, and film historians Foster Hirsch, Rudy Behlmer, Robert Osborne, Alan Rode, Eddie Muller, and Aubrey Solomon.

Life in the Shadows – The Making of Daisy Kenyon (16:12, SD): the story of the film’s production is told by Victoria Preminger, Dana Andrews’ children Susan and Stephen, and film experts Foster Hirsch, Charles Busch, Bob Thomas, and Eddie Muller.

Promo Trailers: I Wake Up Screaming, He Ran All the Way, Cry of the City, Boomerang.

One of the best and most controlled of the movies which Joan Crawford made during her career renaissance in the mid-to-late 1940s, Daisy Kenyon reads quite modern today with a definite lack of histrionics and a first-rate production on display. Kino’s Blu-ray release has some problems video-wise, but for fans of the genre or the stars, it’s worth the upgrade from DVD.

Thank you for this review. I'm not a Joan Crawford fan at all but I will buy this disc.

Joan Crawford was not the only established, big-name actress who, from the mid-40s onwards, repeatedly played roles that would have been more suitable for someone younger. Barbara Stanwyck, for example, in films like The File On Thelma Jordan, No Man Of Her Own and Blowing Wild played women about fifteen years younger than she was. The reason, of course, is that studios putting up the money wanted an established star, not some youngster without a following. I've often thought it would be interesting to see some of these films remade with a younger actress.

In fairness to genders, the same can be said about male movie stars playing roles more appropriate for younger male actors.
You must log in or register to reply here. 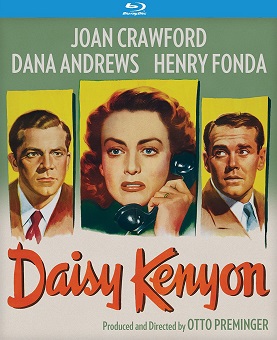