Movies based on video games is a genre that sees more failures than successes. It’s hard to imagine that Paul W.S. Anderson’s Resident Evil movie franchise managed to survive six films, supposedly coming to its conclusion with Resident Evil: The Final Chapter. The film is a fun ride, with some nice action set pieces, but just about anyone can see the ending and plot “surprises” a mile away.

Alice (Milla Jovovich) returns for one last battle with zombies and the Umbrella Corporation in Resident Evil: The Final Chapter, taking her back to where it all began at the hive in Raccoon City, with the Red Queen (Ever Anderson) telling Alice that she has to find the anti-virus there and release it before time runs out and the last standing civilization falls, all while being chased by Dr. Isaacs (Iain Glen). Upon her arrival, she meets up with a group of rebels, led by (surprise!) Claire Redfield (Ali Larter) that includes Doc (Eoin Macken), Razor (Fraser James), Cobalt (Rola), Christian (William Levy), and Abigail (Ruby Rose). The team finds an entrance into the hive, finding they have to do battle (yet again) with Wesker (Shawn Roberts) in order to retrieve the anti-virus that will kill anyone who has been infected with the T-virus, including Alice, and make everyone else immune. Alice eventually learns not only her destiny, but her past that she has been unable to remember ever since the outbreak began.

Director Paul W.S. Anderson manages to almost completely distract his audience from the film’s overly predictable plot points by creating some exciting action set pieces that keep the pace moving briskly. The major problem is that the movie’s BIG reveal is too blatantly foretold in the prologue, so much so that the only one really surprised is Alice herself, unless every member of the audience is brain dead. Milla Jovovich shows her ability to carry a movie as a female action star, as she has done throughout the series. It’s a shame, though, that the series was never able to succeed beyond its mediocrity.

Resident Evil: The Final Chapter was captured in 5K resolution using Red Epic Dragon cameras and completed as a 4K digital intermediate. Unfortunately, the 2160p transfer, graded mildly with HDR, suffers from the same issues I had with Underworld: Blood Wars. Blacks are almost too deep, often obscuring shadow detail in some of the much darker sequences in the film. That being said, though, colors are much more natural here than on the 1080p Blu-ray, and fine detail is excellent in the few daytime scenes, where you can see the textures in the grime on the actors’ faces and clothes, as well as in the textures of the fabrics used in the costumes. Unfortunately, although the movie received a rather wide 3D theatrical release, Sony once again did not include a 3D version in their UHD package. If you want to watch the movie in 3D, you will need to rent or purchase the 3D version on Vudu separately.

Resident Evil: The Final Chapter comes with a very LOUD and rambunctious Dolby Atmos track, which includes a Dolby TrueHD 7.1 core. Gunfire, zombie attacks, explosions, and a host of other effects come at you from all directions in this immersive track. Compared to the DTS-HD MA 7.1 track found on the Blu-ray, LFE is more prevalent in this mix, but never overpowering or too boomy. As loud and active as this track often is, dialogue is always clear and understandable, never getting overpowered by music and effects. Another stellar Atmos mix from Sony.

All of the Special Features can be found on the included Blu-ray version.

Retaliation Mode (1080p; 136.:42): The movie occasionally cuts away to interviews and behind the scenes footage, hosted by Writer-Director Paul W.S. Anderson and his wife, Milla Jovovich.

Explore the Hive (1080p; 4:18): A look at the main indoor set for the film and its various incarnations throughout the franchise.

The Bad Ass Trinity & the Women of Resident Evil (1080p; 6:32): A brief glimpse at the main female characters in the franchise.

Sneak Peak: Resident Evil: Vendetta (1080p; 4:22): An extended trailer for the upcoming animated feature based on the video game series.

Although the title claims this is The Final Chapter, the movie does leave itself open for additional entries. The Resident Evil movies are forgettable fun, and this one is no exception. The UHD presentation is very good, but it is disappointing that the 3D version could not be included. 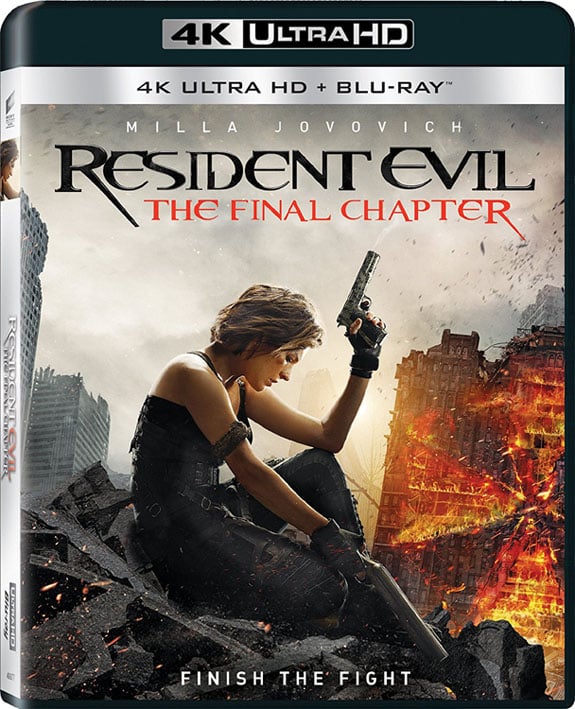