Eran Creevy’s Collide is a flea-brained action picture with fast-paced stunts and all claims to logic thrown right out the window.

Eran Creevy’s Collide is a flea-brained action picture with fast-paced stunts and all claims to logic thrown right out the window. With a couple of Academy Award winners in supporting roles that allow them to ham unmercifully and some fresh-faced new talent trying to establish their own movie-carrying credentials, Collide is one of those popcorn pictures that isn’t going to remain long on anyone’s list of credits.

Devastated to learn that his American girl friend Juliette Marne (Felicity Jones) needs a kidney transplant that will cost $200,000, expatriate Casey Stein (Nicholas Hoult) goes back on his promise to end his association with drug kingpin Geran (Ben Kingsley) and plans with best friend Matthias (Marwan Kenzari) to hijack a cocaine-filled truck owned by Geran’s powerful boss Hagen Kahl (Anthony Hopkins), Geran seeking vengeance on Kahl for not making him an equal partner in their drug enterprise. While part of the plan comes off quite well, Casey finds himself pursued by Kahl’s endless stream of henchmen led by the lethal Kay (Christian Rubeck) managing to elude his pursuers in a series of stolen vehicles which inevitably wreck in spectacular fashion. In order to rein in the elusive Casey, Kahl kidnaps Juliette to use as bait to lure Casey into his clutches.

While the constant chases, captures, escapes, and subsequent pursuits offer high octane adrenaline rushes for those looking for thrills without a scintilla of realism, those wishing a bit more substance with their action won’t find it in the F. Scott Frazier-Eran Creevy screenplay, even filled as it is with flashbacks and fantasies at frequent intervals. It’s patently absurd to think that one man could endure three horrific high speed chases ending in fiery, metal-crunching collisions and escape from each wreck without so much as a broken bone or a bloody nose for his trouble (and the cars until their final flips down the road manage to keep running while pile-driving through building walls, other vehicles, and traveling over every type of rough terrain filled with dozens of rounds of bullets fired into them). Further nonsensical events include the absence of police through many highway and village shootouts with the villains’ machine guns blasting everything in sight, and in a climactic scene in a bar with the four principals all present, the police are outside ready to take prisoners and yet the rear door has not been guarded allowing one and all to slip away unmolested (surely that must be covered in Lockdown Procedures 101). Eran Creevy’s direction certainly gives us full, undiluted coverage of those spectacular crashes, pile-ups, and escapes, and the stunt driving is indisputably top-notch, but this story is not filled with human beings so much as chess pieces that get pushed around from one scene to the next with the impressive, expensive automobiles which are stolen being of more primary interest than any of the characters on display.

It’s a toss-up which of the two Oscar winners Ben Kingsley or Anthony Hopkins does the most heinous job of overacting, but it seems Kingsley wins this outing: a shameless display of wild theatrics with an almost impenetrable accent and a Hugh Hefner-ish taste in everyday garb (outlandish silk pajamas and robes are the primary attire, draped by a lovely assortment of lasses). Hopkins does his usual subtle quiet talking punctuated by certain shouted words and phrases with a sudden crazed look in his eye. Both likely enjoyed their German vacations immensely (the action takes place in Cologne) while the younger actors did the lion’s share of the work. Make-up artists have been careful not to streak star Nicholas Hoult’s face with too much unsightly blood despite his numerous crashes and encounters with bullet-exploding windows and windshields with flying glass everywhere. Felicity Jones is more set decoration than anything else, a pitiable young girl with failing kidneys at the mercy of her boy friend’s thuggish companions. Marwan Kenzari is fine as the best friend, but more interesting is the Energizer Bunny-like performance of Christian Rubeck as the ruthless henchman who shows even less wear and tear from his chase ordeal than Hoult’s Casey does.

The film’s theatrical 2.40:1 aspect ratio is faithfully rendered in a 1080p transfer using the AVC codec. Sharpness is exceptionally fine, and color saturation levels are perfectly delivered with realistic and appealing flesh tones. Black levels are aces, too, and details in the shadows are quite impressive. The movie has been divided into 20 chapters.

While the DTS-HD Master Audio 5.1 sound mix offers excellent room-filling bang for the buck, it’s not quite as accomplished a mix as other action thrillers of a similar genre. There are fewer pans across and through the soundfield than one might expect during the chase scenes, but crashes certainly get plenty of play in the LFE channel. Ilan Eshkeri’s background music gets a full placement in the fronts and rears. Dialogue has been well recorded and has been placed in the center channel.

Promo Trailers (HD): Sleepless, Split, Before I Fall, Get Out.

A popcorn action drama with nothing else in its tiny brain but spills and thrills, Collide might be a better choice as a rental for those drawn to this type of crash-and-chase spectacle. 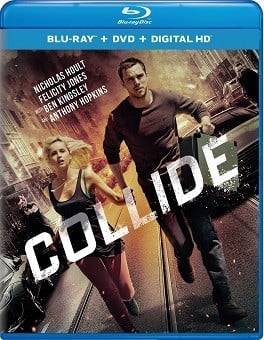