Posted on May 19, 2017 by Robert Harris
The new Blu-ray alone is worth the price of admission 5 Stars

The new 4k UHD of Unforgiven is an interesting case study.

Originally released via LaserDisc in 480i, and later in High definition via the original HD, and then Blu-ray, which as I recall, were both single layer. Good for the time in which they were created, and presumably (at least the latter) from a 1080i master.

In 2011, for the film’s 20th anniversary, it was re-issued, possibly from the same master, and on a BD-50, with appropriate extra content, in digi-book form.

Reality aside, one must presume that somewhere between the original production of duping and protection elements, and any work that may have been performed in 2010-11, the original negative was severely damaged.

As promoted, either what was released in 2011 was a restored version of the film, or whomever was marketing the release didn’t like a perceived lack of sizzle, hence a brilliant new “restoration.”

I’ve now had the opportunity to compare three variants of the film.

My comments must come with a caveat, as I’ll not be set up with a proper 4k OLED panel for a couple of weeks, and hence will update these words.

What I’m seeing in 4k projection of all three discs is as follows:

The 2011, despite the possibility that it’s derived from 1080i, is a quality affair. Very few digital artifacts, and even fewer that would be noted by the average viewer, even in projection.

In comparison to the 2017, the upgrade becomes very obvious, not only in stability, but in overall resolution, black levels, grain structure, etc.

The new Blu-ray alone is worth the price of admission.

Comparing the new 4k UHD/HDR with the new Blu-ray is another affair entirely.

At least via projection, blacks take over the image, with a decided loss of shadow detail. The overall image becomes dark. Again, let me advise that this may change measurably via flat panel viewing, and different scores may become necessary for projection vs OLED.

More interesting, is that the difference between the 4k image, as up-rezzed, and the 4k image as viewed from the 4k disc, are not much different, aside from HDR.

There simply doesn’t appear to be true 4k information in the original negative, which causes me to question whether a 4k release was warranted.

What we do know, is that every bit of information, regardless of actual resolution, has been harvested, and finalized in pure 4k.

In my opinion much of this becomes moot, as the included Blu-ray, which is only available packaged with the 4k, is alone worth the price of admission.

Final note. On the audio side, we go from an old Dolby Digital stream to DTS-HD MA 5.1, which especially on higher end equipment, is a huge upgrade.

Run on a Sony OLED, the imagery pops, with superb, rich blacks, and a far superior image to projection except in bright scenes.

Zero problems, with the exception of the four or so seconds, which are duly noted. 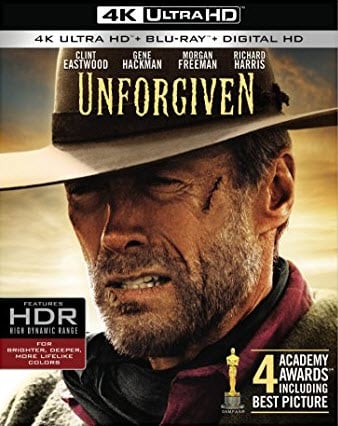