Forum List What's new Dark Style Change width
Log in Register
What's new Search
Menu
Log in
Register
Navigation
Install the app
More options
Dark Style
Close Menu
Posted on April 16, 2020 by Matt Hough
You are using an out of date browser. It may not display this or other websites correctly.
You should upgrade or use an alternative browser.
Southern Gothic melodrama offers an offbeat, uncommon story. 3.5 Stars

Carson McCullers’ Southern Gothic melodrama Reflections in a Golden Eye might not possess the purity of narrative of her A Member of the Wedding or the heartbreaking angst of The Heart Is a Lonely Hunter, but it does contain the author’s patented doses of physical and emotional frustration, loneliness, and obsession.

Carson McCullers’ Southern Gothic melodrama Reflections in a Golden Eye might not possess the purity of narrative of her A Member of the Wedding or the heartbreaking angst of The Heart Is a Lonely Hunter, but it does contain the author’s patented doses of physical and emotional frustration, loneliness, and obsession. In John Huston’s moody, unsettling 1967 film version of the 1941 novel, Elizabeth Taylor, Marlon Brando, Julie Harris, and Brian Keith, among others, get more than enough time to explore the unusual vagaries of Mrs. McCullers’ offbeat, off-kilter story.

On a Southern Army base, two unhappily married couples, Major Penderton (Marlon Brando) and his wife Leonora (Elizabeth Taylor) and Colonel Langdon (Brian Keith) and his wife Alison (Julie Harris), are going through the motions of coupledom though both members of each couple sleep in separate bedrooms and are emotionally withdrawn from one other. Their emotional distance from their respective spouses doesn’t stop Col. Langdon and Leonora from carrying on an affair, a situation which seems rather obvious to both cuckolded partners who are unconcerned since their attentions are directed elsewhere: Major Penderton in his growing obsession with enlisted Private L.G. Williams (Robert Forster) and Alison in blocking out memories of her deceased child by throwing herself into projects initiated by her fey houseboy Anacleto (Zorro David). Williams becomes obsessed, too, with the major’s provocative wife who strolls around her house in the nude, rides her beautiful horse with abandon, and makes no secret of her attraction to the opposite sex.

Gladys Hill and Chapman Mortimer have adapted Mrs. McCullers’ provocative book for their screenplay, but as the Production Code was still in its last gasps of existence, Major Penderton’s homosexuality (and that of both Anacleto and another Army officer Captain Weincheck) has to be implicitly rather than explicitly expressed, and the nudity of both Leonora and Private Williams (who enjoys riding horses bareback with no clothes on) must be photographed from a distance. (Allegedly, that’s not Elizabeth Taylor nude in full figure from the back but rather a body double.) We also hear the graphic saga of the grieving Alison’s having cut off her nipples with garden shears rather than being shown that bit of graphic gore in a flashback. Thus, the movie, except for a few pertinent scenes, emerges as more talk than action, the characters themselves more interesting than almost anything the screenwriters have them doing. Director John Huston, however, does make sure to stage a few memorable scenes: the two officers and Leonora go riding where Penderton gets thrown showing us his lack of expertise on a horse, something that sets up the film’s most galvanizing sequence where Penderton takes his wife’s horse out for a wild ride that he quickly loses control of leading to his own injury and a disturbing bit of retaliation against the horse, duplicated later when Leonora finds that her horse has been beaten by her husband which she returns to him in kind. The Major’s continual attempts to work through his obsessive demons (unsuccessfully) gives the film its real reason to be (the next year’s similarly themed The Sergeant focused on its title character without having to give much attention to other narrative characters), but it’s paralleled by Private Williams’ overwhelming obsession with Leonora, enough so that he continually sneaks into her room during the night to watch her sleep and finger her undergarments. The payoff for his and the major’s obsessions marks the film’s denouement.

Marlon Brando was considered quite brave at the time to tackle such a passive character as the closeted homosexual Major Penderton (whose Southern dialect seems to be mimicking Tennessee Williams’ way with words). Constantly striving to improve his physical appearance by weight lifting and using rejuvenation crème on his face, Penderton is ineffectual as both a husband and an Army instructor (a couple of rather tedious lectures assures us of that), and his tortured life of repression (pouring over a box of hidden treasures like a photograph of a nude Greek statue, a stolen silver spoon from Captain Weincheck’s collection, a candy wrapper discarded by Williams) which explodes in his beating of Leonora’s horse is filled with symbolism. Elizabeth Taylor’s Southern dialect ebbs and flows a bit, and her tactlessness with the fragile Alison and her brash behavior overall don’t make her very endearing though Taylor is playing nicely the character as written. Brian Keith gives a fine performance as the frustrated Col. Langdon. Most poignant is his acting near the film’s end when the loss of people he had taken for granted and ill-used is most telling. Julie Harris is the most sympathetic figure in the movie, but the screenwriters haven’t lavished on her quite enough attention in which to fully flesh out her character. Zorro David’s flamboyant houseboy Anacleto seems less overdone with each passing year. Robert Forster was introduced to film audiences in this movie, and though he has very little to say, his brooding countenance and stealthy tread make for a striking first impression.

The set offers two discs, each containing the movie in either the director’s preferred “golden hue” motif (desaturated color with a pinkish brown wash over the image) or the studio’s preferred Technicolor look. Both are framed at their Panavision theatrical aspect ratio of 2.35:1 and are offered in 1080p resolution using the AVC codec. Both transfers are glorious to look at with striking sharpness, excellent contrast, and lots of detail. The regular color version (which is the one I saw at the cinema all those decades ago) offers striking hues, and it’s most fortunate Warners offered this alternate version to fans of the movie who may have seen it this way originally and wanted to have a keepsake of that version. Huston’s “golden” version is also astonishing to look at and constitutes an advance on the DVD with much more graphic detail which can be seen through the pinkish brown filter. The movie has been divided into 30 chapters.

Vintage Behind-the-Scenes Footage (23:09, SD): silent behind-the-scenes black and white footage of the stars and director at work and at rest accompanied by music on the soundtrack. Some narration setting up the various excerpts might have made it more involving.

John Huston’s Reflections in a Golden Eye was one of the director’s proudest achievements even though it didn’t meet with much success at the box-office. Its reputation has grown over the years, and now with the movie available to be seen with either its director’s preferred look or the studio’s more colorful alternative, it’s more enticing than ever to sample the melodrama within.

You've whetted my appetite for this release even further, Matt, thank you! It can't come soon enough, but fortunately I received Dodsworth today which will tide me over nicely.
You must log in or register to reply here. 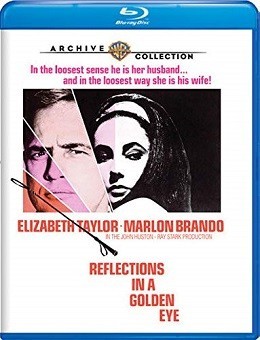