Forum List What's new Dark Style Change width
Log in Register
What's new Search
Menu
Log in
Register
Navigation
Install the app
More options
Dark Style
Close Menu
Posted on July 5, 2020 by Martin Dew
You are using an out of date browser. It may not display this or other websites correctly.
You should upgrade or use an alternative browser.

Whether you’re drawn to his quest to make you cower in fear, rejoice in triumph, weep with loss, or even secretly enjoy his questionable brushes with sentimentality, there’s no denying Steven Spielberg understands the language of film probably more acutely than any other director, living or dead. A legend in his own lifetime, with his name often reeled off in all-time-great lists alongside the likes of Hitchcock, Kubrick, Ford and Lean, he has single-handedly altered our collective cultural perception of sharks, dinosaurs, aliens and World War II. Indeed, it’s already impossible to imagine an extra-terrestrial visitation or the contours of a T-Rex without instantly referencing this auteur’s extraordinary filmed output. Here in part one of a two-part piece, I’ve picked out the first three of six perennial favorites on 4K UHD Blu-ray from the Arizona-hailing genius that no discerning collector should be without… 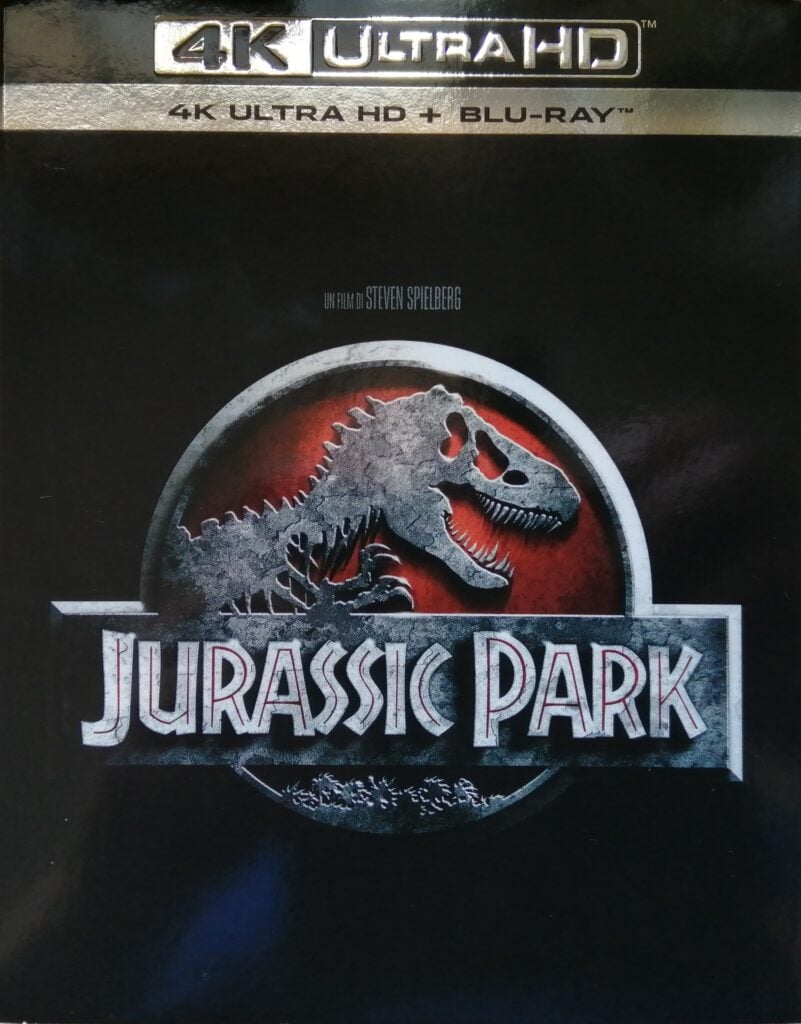 Whatever you might think of the string of sometimes lack-luster sequels in Universal’s monster-stampeding canon, the original Jurassic Park broke so much new ground in 1993 it’s almost hard to imagine life before slickly-rendered ILM-drawn brachiosauruses and velociraptors tore up our multiplex screens. The T-Rex paddock scene alone – with its unbearable suspense – is a wonder to behold and, even as the first movie of its kind, JP still arguably presents us with some of the finest computer-generated imagery in a since checkered history of studio digital effects. Add John Williams’s rousing score (at a time when melodies were still allowed) and long-time collaborator Rick Carter’s ingenious production design, and you have all the ingredients for a magnificent summer blockbuster. Among other technical achievements for the release of JP was the introduction of DTS 5.1 digital audio, ensuring that multi-dimensional soundscapes and earth-shattering bass were staples of the theatrical presentation.

The 4K Blu-ray is a welcome improvement over its 1080p counterpart. Not only has the audio mix been built out to give your overhead speakers a busy DTS:X workout, but the image enhancements combine marked detail upgrades with a long-awaited overwrite of the sometimes muddy-looking and noise-reduced 1080p disc. Check out the pristine 4K detail and color-grading in the scene where the team first board the Ford Explorers, or the improved depth perception during the T-Rex paddock attack indebted to a little HDR magic. 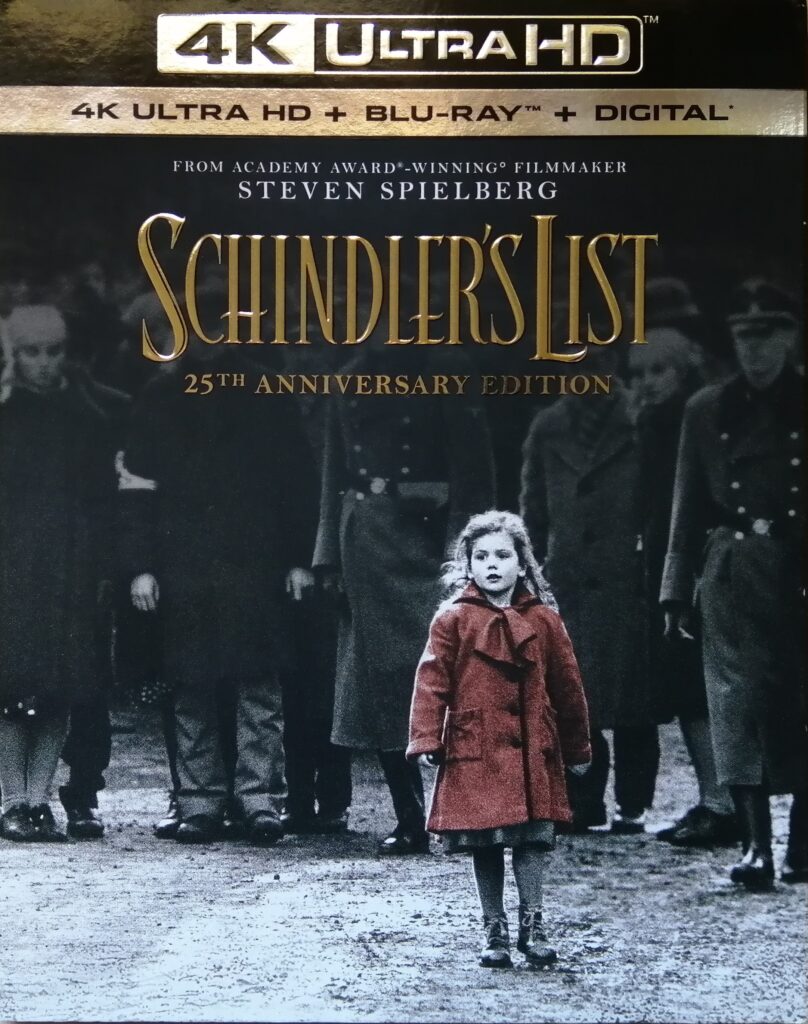 Learning that Spielberg oversaw post-production duties on Jurassic Park while filming his 1993 Holocaust opus Schindler’s List in Poland can easily make the mind go into a spin. That two so diametrically opposed genre pieces could be crafted simultaneously is surely nothing short of a miracle. While JP has all the hallmarks of a classic action adventure, Schindler’s List – with its powerful story of a wartime opportunist saving 1,100 Jews from certain death – sits up there as one of the inimitable three-hour-plus histories along the lines of Lawrence of Arabia or Gandhi. The film manages to juxtapose the epic scale of Lean’s Doctor Zhivago with the stylistic intimacy of film noir classics of the 1940s, while unapologetically exposing the audience to shockingly incidental and newsreel-like violence meted out by the Nazis. Spielberg never allows you a comfort zone, ever testing the audience to unearth layers of moral ambiguity in its central characters, and ultimately asking, ‘What would you have done?’ One of the finest movie-making achievements of all time, the director deservedly walked away with his first Best Director and Best Film Academy Awards.

The 4K scan for the UHD Blu-ray disc lends an even more film-like look to the material, with grain seemingly more integrated and organic than previous versions. Particularly noteworthy of enhanced detail are the shadowy interiors of the Cracow nightclub and cathedral for Jewish black marketeers, intricate clothing weave on Schindler’s (Liam Neeson) suits, and buildings in the ghetto appearing larger in scale by virtue of the higher resolution. The Dolby Atmos mix uses height channels subtly, but atmosphere is filled out with immersive audio cues and previously undetectable background voices and sound effects. 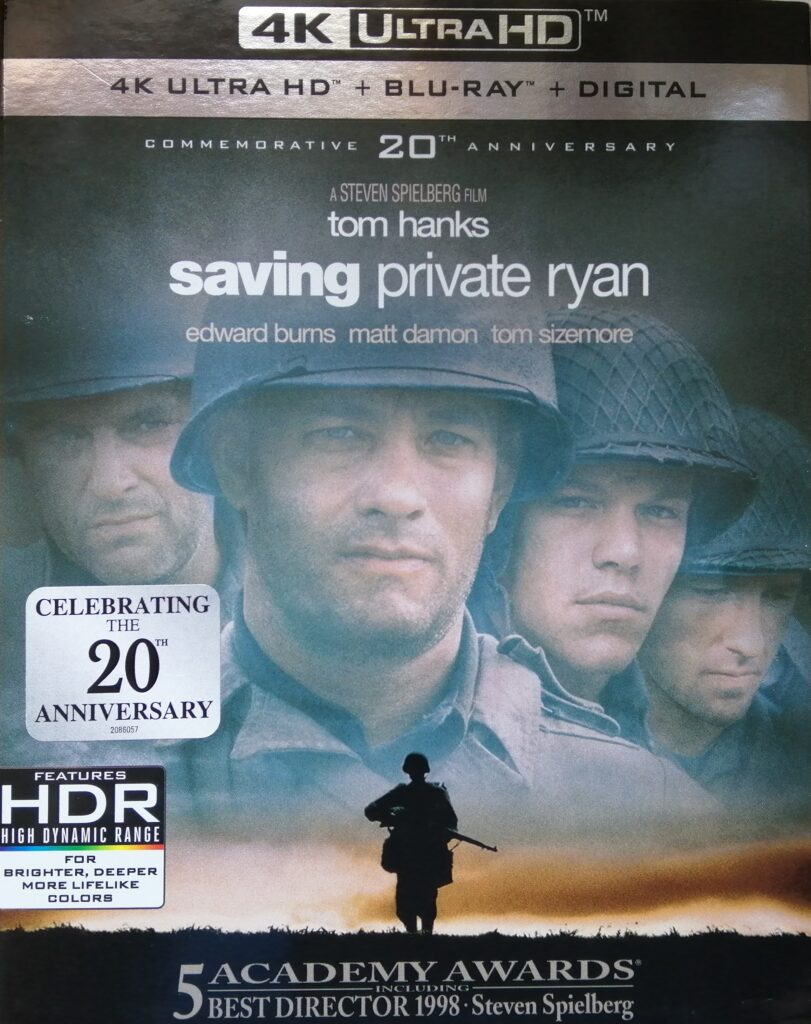 Spielberg’s second WWII outing of the decade, and which could be considered the sister work to Schindler’s List, was 1998’s Saving Private Ryan, the fictional account of a troupe of 2nd Ranger Battalion soldiers instructed to slip behind enemy lines in France to find and return home the last surviving Ryan family sibling of the title. The 25-minute opening salvo as the troops arrive on Normandy’s notoriously deadly Omaha Beach is about as visceral and gut-wrenching as any depiction of war on film. Cinematographer Janusz Kaminski’s shaky camera recording the horror on washed-out, muted color film imprints long indelible images on the memory, and pretty much changed the way war is represented for the rest of cinema time. As Captain Miller (Tom Hanks) zeros in on his rescue target (Matt Damon), the ensuing German tank onslaught provides no reprieve in the Ramelle finale as it levels up the intensity and terror to mirror the opening act. Despite the enveloping carnage, Spielberg imbues a sense of empathy for the small team of protagonists on their mission, and the result is a patriotic and heartfelt tribute to the brave men and women who fought for their country and the liberation of Europe.

While facial textures and landscapes benefit from the uptick in resolution and associated sharpness, paradoxically the battle sequences of Ryan on 4K look even more dirty and improvised than the SDR Blu-ray, a function of the more densely-packed grain and film-like texture. If the goal of releasing titles on 4K UHD is to bring us closer to the experience of watching a premium first run 35mm film print, then the strategy of the technicians at Amblin and DreamWorks appears to be working. The scene in the ruined and rain-drenched French village exhibits some stunning HDR effects as the soldiers home in on the enemy, and there are jet blacks and fine shadow distinctions on display inside the abandoned church shortly after. The Dolby Atmos immersive soundtrack opens up the soundstage to a cacophony of any number of ceiling-bound gunfire rounds, and the tremendous power of the sea’s waves as the landing craft approach the beach will literally flood your room.

Spielberg has to be one of my favorite directors of all time but I actually have not even seen Schindler's List yet but I hope to rectify that soon after I get the 4K disc.

Dave Moritz said:
Spielberg has to be one of my favorite directors of all time but I actually have not even seen Schindler's List yet but I hope to rectify that soon after I get the 4K disc.

Also Poltergeist and the Back To The Future films are not Spielberg directed films as he was only the producer/exec/or writer on them.

You are correct it is Duel and I only included Poltergeist because he was involved as the writer but I guess I should have included that in my post.

And as far as Back To The Future goes I am so used to seeing Spielberg's name on it that I honestly forgot that it was Robert Zemeckis that directed BTTF.
P

Perhaps he was thinking along the lines of a Dual-Format.
Last edited: Jul 5, 2020

It's a shame that Universal still has not released the Jurassic Park films separately on 4K/UHD discs. I got tired of waiting and purchased the first film in 4K/HDR via iTunes streaming service.

Scott Merryfield said:
It's a shame that Universal still has not released the Jurassic Park films separately on 4K/UHD discs. I got tired of waiting and purchased the first film in 4K/HDR via iTunes streaming service.
Click to expand...

Totally agree, Scott. I bought JP1 from Italy and that's the slipcover pictured above. Slightly annoying that JP1 is slung in with the rest of them when it's in a class of its own.

You obviously haven't seen Jaws for years and I'll wager that you don't have children. I saw the 4K version last week with my 10 year old son - we're watching most of Speilberg's films together because they play particularly well with children. Jaws still holds up extremely well. Not just the suspense scenes, but also the quieter, family scenes. Classic Spielberg. My son and I particularly liked the scene where Chief Brody comes home exhausted and depressed, and says to his little son: "Give us a kiss!". The son says "Why?" and Chief Brody says: "Because I need one!". After that, I ask my son every night, when putting him to bed: "Give us a kiss!" and my son says "Why?", while smiling. I enjoyed Jaws and ET theatrically when they were first released but only Jurassic and Indiana have repeatability for me at home.
J

I saw E.T. as a new theatrical release when I was 19, and uneducated about films. I didn’t like it then. I watched it again 20 years later, having watched a good number of highly regarded films, and felt more knowledgeable about films- I still didn’t like it. Will never watch it again.

Worth said:
It's hard to believe ET, Blade Runner and The Thing all came out on the same day.
Click to expand...

Not so hard because They didn’t

Blade Runner and The Thing were released June 25 1982(saw them both on that very day).

Pretty sure I have all of Spielberg's 4K UHDs so far, except for "The Post". Waiting on a good deal.

A bad job of moderating out of me for letting it continue this long, but I have since rectify the situation by moving all posts that want to discuss the Spielberg movies they think are overrated and/or simply don't like or hate to its own thread. This thread is about 'must own' Spielberg films on 4K disc. Any further posts that violates the premise of this thread will be deleted and possible thread bans issued. If you want to argue about Spielberg movies that you think are either overrated and/or are not good movies then please do so in the thread linked below.

Spielberg Films that are Overrated or you Hate!

My 'must own' Spielberg movies that I want on 4K disc are the following:

Robert Crawford said:
My 'must own' Spielberg movies that I want on 4K disc are the following:

I own 7 (not in 4K on most) of those movies and love them all. I don’t have Schindler’s and Ryan because, while they are excellent movies, they are a tough watch. I’ve never seen Purple and I’ve got to correct that. Is your list meant to rank them in the order of “must own”?
You must log in or register to reply here.