Forum List What's new Dark Style Change width
Log in Register
What's new Search
Menu
Log in
Register
Navigation
Install the app
More options
Dark Style
Close Menu
Posted on July 5, 2020 by t1g3r5fan
You are using an out of date browser. It may not display this or other websites correctly.
You should upgrade or use an alternative browser.
Gary Cooper adventure debuts on Blu 4 Stars

The first director to win multiple Oscars, Lewis Milestone began his career working as an editor and an assistant director before Howard Hughes promoted him to the director’s chair in the mid 1920’s. Milestone was rewarded with critical and commercial successes like The Racket (1928), All Quiet on the Western Front (1930), and The Front Page (1931); one of the ten movies that Milestone made during the 1930’s, The General Died at Dawn, is a well mounted adventure bristling with suspense. Universal has released it previously on DVD, but Kino has licensed the film for its Blu-ray debut.

In war torn China, a mercenary named O’Hara (Gary Cooper) is tasked by the local villagers to get a shipment of arms to the rebels being oppressed by the ruthless warlord General Yang (Akim Tamiroff). However, O’Hara is sidetracked by Judy Perrie (Madeleine Carroll), who is being used by Yang to siphon the arms shipment away from the rebels. What happens next is battle of wills that sees allegiances tested and changed, as well as a few people becoming casualties, leaving only one – between O’Hara and Yang – to walk away at the end.

The General Died at Dawn may have faded from the public consciousness over time, but it’s a solid adventure with a great sense of suspense. It was also a bit ahead of its time in terms of shot composition and story telling; look at at the scene transition involving a doorknob fading into a cue ball on a billiard table as well as an early use of split screen in one scene to show a few of the characters and their respective plot lines for example. To top it off, Milestone does a great job at establishing atmosphere and tension to help propel the story along; this should be too surprising, since Milestone also had the talents of longtime Paramount production designer Hans Dreier and cinematographer Victor Milner working alongside with him – the latter would receive an Oscar nod for his work here. Add in some very solid performances as well as a taut script by Clifford Odets and The General Died at Dawn stands out as one of Paramount’s premier productions of the decade, one that’s a bit overlooked now but worthy of rediscovering.

Though not one of his signature roles, Gary Cooper has a solid and meaty part as the mercenary who gets caught up in war torn China; his role was modeled after a real life adventurer who ran guns for many warlords in China during this time, Morris “Two-Gun” Cohen. In one of her best parts, Madeleine Carroll is notable as the spy who betrays and then falls in love with O’Hara; she would go on to be the highest paid actress in the world at the height of her career before largely leaving cinema following the death of her sister in WWII during the London Blitz. Basically walking away with the movie from both of them is Akim Tamiroff as the ruthless and cunning General Yang; he would earn a nomination for the first Oscar award for Best Supporting Actor and would later win the first Golden Globe for Best Supporting Actor for his performance in the film adaptation of For Whom the Bell Tolls (which he would earn an Oscar nod for as well). Rounding out the cast here is Dudley Digges as Mr. Wu (not the character portrayed by Lon Chaney in 1927), Porter Hall as Judy’s father and partner in spying, William Frawley as the gun runner Brighton, J.M. Kerrigan as the duplicitous Englishman working for General Yang, Leonid Kinskey as the shipping line clerk, and author John O’Hara appearing in a cameo as a newspaper reporter on the train; director Lewis Milestone and screenwriter/playwright Clifford Odets make cameo appearances as well.

The movie is presented in its original 1:37:1 aspect ratio, taken from a recent 4K transfer. Film grain is organic throughout, with fine details and gray scale being faithfully represented. Minor problems like scratches and dirt are present, but aren’t too distracting; overall, this is likely the best the movie will ever look on home video.

The original mono soundtrack is presented on a DTS-HD Master Audio track. Dialogue and the sound mix are clear and faithfully represented here; Werner Janssen’s Oscar nominated score benefits most here, with great strength and fidelity rendered faithfully as well. Problems like cracking and distortion are fairly minor, making this another improvement over the previous Universal DVD and likely the best the movie will ever look on home video.

Commentary by film historian Lee Gambin and actress/film historian Rutanya Alda – Recorded for this release, Gambin goes over some of the elements and themes of the movie while Alda talks about the cast and crew.

Bonus KLSC Trailers – The Lives of a Bengal Lancer, Beau Geste, Man of the West, The Great McGinty & The Black Sleep

While not the first movie that would come to mind when talking about the 1930’s, The General Died at Dawn is still a solid example of Golden Age Hollywood filmmaking in addition to being a well executed adventure and suspense tale. Kino continues its run of quality Blu-ray releases with a great transfer and an insightful and informative commentary track here. Go ahead and upgrade from the previous DVD release of the movie (The Gary Cooper Collection), as this release is highly recommended. 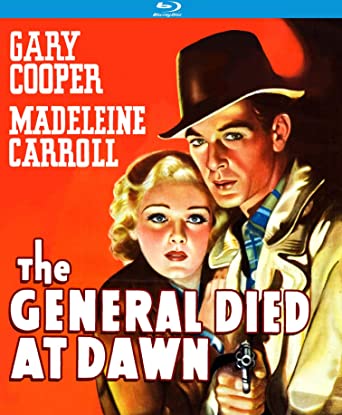