Forum List What's new Dark Style Change width
Log in Register
What's new Search
Menu
Log in
Register
Navigation
Install the app
More options
Dark Style
Close Menu
Posted on September 6, 2017 by Matt Hough
You are using an out of date browser. It may not display this or other websites correctly.
You should upgrade or use an alternative browser.
Disappointing action-horror hybrid 2.5 Stars

This 2017 version of The Mummy is loud and gauche but only fitfully entertaining with a jumbled narrative that doesn’t serve very well as the initial effort in Universal’s new Dark Universe franchise.

Eighteen years ago, The Mummy franchise was rebooted with a very entertaining popcorn flick starring Brendan Fraser, and now in 2017, another variation on the story comes along in Alex Kurtzman’s The Mummy, a disappointing first effort in Universal’s new Dark Universe series, an attempt to bring back to life all of the extensive gallery of Universal horror icons. This new effort doesn’t really know what it wants to be, however: a Tom Cruise action picture, a supernatural horror thriller, or what it has turned out to be: a cinematic smorgasbord with some action, some thrills, some horror, some comedy, some romance, and all of the mishmash so unsatisfying as to be a waste of almost two hours.

Ahmanet (Sofia Boutella), an ancient Egyptian princess who murdered her father, the Pharaoh, and his infant son so that she could lay claim to the throne, is mummified and taken to Mesopotamia where she’s buried in a tomb meant to imprison her demonic spirit for all eternity. Several thousand years later, Nick Morton (Tom Cruise), a wisecracking, free-spirited U.S. Army corporal and part-time tomb raider, stumbles upon the princess’ buried mausoleum with his fellow raider Chris Vail (Jake Johnson) and inadvertently releases the mummy from her crypt whereupon she begins a series of assaults on living persons to draw their life’s energy from them to bring herself back to life and to turn them into zombies who will effectively do her bidding. Ahmanet sees in Nick the potential for him to become the earthly vessel for Set, the God of death, and she begins to possess him in order to get close enough to him to take away his earthly life and make him immortal by plunging into him the Dagger of Set. Naturally, Nick resists her attacks, aided by former lover Jenny Halsey (Annabelle Wallis) and by following the advice of Jenny’s employer Dr. Henry Jekyll (Russell Crowe).

A quick glance at the credits for the film’s narrative suggests why it’s such a nearly incomprehensible mess: three writers contributed to the story (Jon Spaihts, director Alex Kurtzman, and Jenny Lumet) and another three drew up the final screenplay (David Koepp, Christopher McQuarrie, Dylan Kussman) making for an overcooked stew that will impress you as you watch that the story is just being adjusted with new rules for the supernatural creatures neatly added as the film rolls along. With action moving from ancient Egypt to modern day Iraq to London, there are plenty of locations to display on the expansive screen, and the impressive sets fashioned for the film, from the Egyptian tombs to an underground London vault where excavated remains from the Crusades (of all things) figure directly into the storytelling. But nothing seems to fit together smoothly and evenly: the Dr. Jekyll/Mr. Hyde scenes seem tacked on for no purpose other than to introduce Russell Crowe’s good doctor to the series, and the endless attacks on Nick by the determined Ahmanet (who also seems to have a ready supply of zombie corpses in London to do her bidding, too) get really tedious by the end. This is also another of those action films in which the human characters have indestructible bodies with both Nick and Jenny being flung about rooms crashing into walls, church pews, and stone stairs and being rained on by shards of shattered glass and never sustaining even a scratch, much less broken bones or a concussion. To his credit, director Alex Kurtzman stages two exciting sequences: an attack on Nick and Chris in Iraq and a novel zero-gravity sequence inside a falling airplane while Nick and Jenny struggle to find parachutes to get out in time.

Tom Cruise is acting a role that he’s been playing for several decades, the frisky, devil-may-care adventurer with nary a change in spirit or demeanor from when he played these roles as a young man. His character seems to be about twenty years his junior, and while he’s certainly in great shape (he doesn’t let us forget it with a nude scene inside a morgue), it does seem a little off that everyone around him is so much younger. Annabelle Wallis is very attractive as his former love interest Jenny, but she doesn’t make much of a dramatic impression. Sofia Boutella certainly uses her dancer’s carriage and exotic looks to entice effectively as Ahmanet. Jake Johnson is the film’s comic relief as Nick’s eager but cowardly friend Chris, and he’s entertaining through various stages of deterioration in the movie (think Griffin Dunne’s character in An American Werewolf in London, obviously the source of inspiration for this narrative element). Russell Crowe plays around with two different accents as the afflicted Dr. Jekyll/Edward Hyde, and Courtney B. Vance as Colonel Greenway has a few precious moments calling Nick and Chris on the carpet for their nefarious double dealings in the Middle East.

The film’s theatrical 2.40:1 aspect ratio is faithfully rendered in this 1080p transfer using the AVC codec. Sharpness is very good throughout, detailed enough to reveal some of the sometimes phony looking CG effects (though the movie bent over backwards to use as many real locations and make-up prosthetics as it could). Color is strong and deeply saturated though flesh tones appear natural when the characters are in natural light. Contrast has been applied expertly for a first-rate picture, and black levels are the deepest of deep. The movie has been divided into 20 chapters.

The Dolby Atmos sound mix (decoded by my equipment to the Dolby TrueHD 7.1 core) is bracingly solid and very effective (and kudos to Universal for providing Atmos even on a lowly Blu-ray instead of holding it exclusively for the UHD release). Dialogue has been masterfully recorded and mostly resides in the center channel though there are some occasional directional voices to give the mix some breadth. Brian Tyler’s music uses lots of deep bass to rumble your home theater seats while the orchestral music gets the full surround treatment. Atmospheric effects likewise are split in the fronts, rears, and all channels in between for a very immersive listening experience.

Audio Commentary: director Alex Kurtzman and actors Sofia Boutella, Annabelle Wallis, and Jake Johnson watch the film together (the actors for the first time) sharing their delight at what they’re seeing and sharing stories of the production. Sometimes too many are chattering away at the same time, but they generally let the director lead the conversation.

Deleted/Extended Scenes (4:52, HD): four scenes may be viewed together or separately.

Cruise & Kurtzman: A Conversation (21:15, HD): the star and his director have a mutual admiration society for each other’s talents while also extolling Cruise’s other cast mates who worked with him so tirelessly.

Life in Zero-G: Creating the Plane Crash (7:32, HD): behind-the-scenes look at the creation of the film’s most impressive single sequence with director Alex Kurtzman, producer Jeb Brody, and stars Tom Cruise and Annabelle Wallis commenting on the production.

Cruise in Action (6:09, HD): famous for doing his own stunts, Tom Cruise discusses his love of action sequences with some behind-the-scenes shots of the star at work. He’s also praised by director Alex Kurtzman, producers Jeb Brody and Sean Daniel, and co-stars Annabelle Wallis, Jake Johnson, and Sofia Boutella.

Becoming Jekyll and Hyde (7:10, HD): Russell Crowe discusses his process of getting into the minds of the two personalities and is greatly praised by producers Jeb Brody and Sean Daniel, director Alex Kurtzman, production designer Dominic Watkins (who talks about Jekyll’s prison-like set), and co-stars Tom Cruise and Annabelle Wallis.

Nick Morton: In Search of a Soul (5:43, HD): Tom Cruise discusses what attracted him to the role of Nick with his work as Nick praised highly by producer Jeb Brody, director Alex Kurtzman, and co-star Annabelle Wallis.

Ahmanet Reborn (3:52, HD): an animated graphic on-screen featurette detailing the princess’ thoughts about her treatment and her goals once she is freed.

DVD/Digital Copy: code sheet and disc enclosed in the case.

The Mummy is loud and gauche but only fitfully entertaining with a jumbled narrative that doesn’t serve very well as the initial effort in Universal’s new Dark Universe franchise. The video and audio quality of the Blu-ray is superlative, though, so those curious to see what disappointed so many will at least be able to experience it with reference quality materials.

When I saw this on release it was the first time ever I was going to walk out of a cinema because a film was so bad, but I stayed to the end just to check out the Dolby Atmos and as Matt says it was great.
Last edited: Sep 7, 2017
S

This 2017 version of The Mummy is loud and gauche but only fitfully entertaining with a jumbled narrative that doesn’t serve very well as the initial effort in Universal’s new Dark Universe franchise.

i love this movie .Action seen is very good

Worst
Film
Of The Year
Of Tom Cruises Career

DP 70 said:
When I saw this on release it was the first time ever I was going to walk out of a cinema because a film was so bad, but I stayed to the end just to check out the Dolby Atmos and as Matt says it was great.
Click to expand...

You comment on the indestructible humans. I've have noticed when the movie is good, that's just a nit or I don't care at all. When the movie sucks, as The Mummy does, it's a glaring mistake. Russel Crowe does not get the job done at all. Oh they spared no expense to hire him, and forgot to ask if he's right for the part and he ain't.

I saw this movie in the theatre in 3D. I refuse to see it in this flat version and intend to order the proper 3D version from Amazon.uk. Why in the world they can have it available in Britain and not have it available in its country of origin, in the way it was intended, is a mystery to me. If companies are weezeing out of 3D, it makes no logical sense to do so in one country and not another.

About $15 shipped to the US for the 3D version

RolandL said:
About $15 shipped to the US for the 3D version
Click to expand...

Sell on eBay if I hate it.
You must log in or register to reply here. 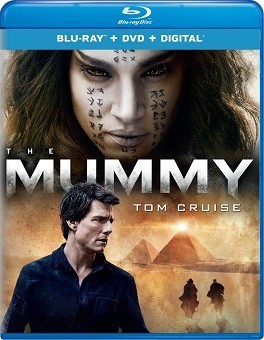