Forum List What's new Dark Style Change width
Log in Register
What's new Search
Menu
Log in
Register
Navigation
Install the app
More options
Dark Style
Close Menu
Posted on September 5, 2017 by Matt Hough
You are using an out of date browser. It may not display this or other websites correctly.
You should upgrade or use an alternative browser.
Wry black comic farce works in fits and starts. 3 Stars

The blackly comic idea at the heart of Tom Schulman’s 8 Heads in a Duffel Bag gets only a moderate execution (no pun intended) in this out-of-control farce that is equal parts funny and tedious.

The blackly comic idea at the heart of Tom Schulman’s 8 Heads in a Duffel Bag gets only a moderate execution (no pun intended) in this out-of-control farce that is equal parts funny and tedious. A talented comic cast has some good moments but are at the mercy of the erratic direction and a screenplay that spins its wheels more often that it jolts ahead into new areas of comic inspiration. All in all, only a fair time is to be had by all though with a cult crowd in a theater, the film might play better than in one’s living room.

Doing one last job before retirement from the mob, Tommy (Joe Pesci) is tasked with transporting eight severed heads of recently executed rival mobsters to San Diego as proof that his bosses Benny (Joe Basile) and Rico (Anthony Mangano) have done their jobs. When Tommy’s duffel bag is mixed up with that of medical student Charlie Pritchard (Andy Comeau) who is vacationing in Mexico with his fiancée Laurie (Kristy Swanson) and her parents (George Hamilton, Dyan Cannon), Tommy tracks down Charlie’s friends Ernie (David Spade) and Steve (Todd Louiso) to try to find out where Charlie is in Mexico. After kidnapping them, he goes after Charlie and Laurie’s confused parents, each of whom has had unpleasant encounters with some of the heads from the bag which have a way of not staying put in the duffel bag.

Director Tom Schulman’s idea of switched luggage is certainly not an inspired one, but there are unquestionably some funny and outrageous moments concerning the heads all throughout the movie (the zenith? The eight heads serenade us with “Mr. Sandman” in a dream sequence). The problem with the script, however, is that Schulman’s writing and direction gets ever wackier by the minute, and grounded characters quickly become caricatures that resemble nothing living on the planet. He milks gags long past their expiration date (a yappy pup who’s always in the wrong place at the wrong time causing Charlie no end of headaches, a Mexican gang who steals Charlie’s jeep not once but twice, the hysterically overdone screeching and fainting of Laurie’s mother which really strains viewer good will, the bewhiskered notion of a battleax mother-in-law (Ernestine Mercer) who lives for nothing but chain-smoking and belching vitriol at everyone). Any early promise that the movie might be an oddball lark quickly withers with the insertion of these tiresome and unfunny comic tropes.

Joe Pesci’s Tonny Spinelli is the usual spitfire Mafioso that Pesci has played seriously in a host of dramatic films (even winning an Oscar for one of his performances), only here it’s exaggerated for comic effect. But it’s a role that retains is farcical charms for only a limited amount of time, and there is no way, for example, he could destroy airport property or break up a frat house the way he does without someone calling the police on him. More appealing is Andy Comeau’s Charlie who is drawn into the outrageous plot and has to do the best he can to survive it. Charlie’s frat brothers Steve and Ernie are played by Todd Louiso and David Spade, the former quite funny and oddly endearing as his horrors at the events unfolding drive him slowly bonkers while the latter plays his usual sarcastic jerk. Kristy Swanson’s Laurie, after the expected freak out reaction at first, has the drab job of playing straight woman to the nuttiness going on around her, and the couple’s estranged courtship gets put on hold in light of more pressing matters (the ending will come as a surprise to no one). George Hamilton and Dyan Cannon play what’s written for them, but he’s rather a pill and she’s so hysterical that she pushes way too hard to earn some laughs. Joe Basile and Anthony Mangano are the usual lunk-headed mob types found in comedy movies while Frank Roman plays sweet-natured hotel bellman Paco innocently drawn into the nutty farce in the climactic sequences.

The film’s theatrical 1.85:1 aspect ratio is faithfully delivered in this 1080p transfer using the AVC codec. It’s a gorgeous transfer with only a dust speck here and there to betray the age of the film. Sharpness is excellent, and color saturation levels are rich but always under control, and skin tones are both realistic and appealing. Contrast has also been consistently applied for a first-rate viewing experience. The movie has been divided into 24 chapters.

The disc offers both DTS-HD Master Audio 2.0 stereo and 5.1 surround encodes (the 5.1 is the default). The stereo track is a bit louder, but the 5.1 track resolves the dialogue, music by Andrew Gross, and atmospheric effects to a greater degree, so it’s really listener’s choice as to which will satisfy you best. There are no age-related problems with hiss, crackle, or flutter to mar the listening experience.

Six-Page Booklet: contains some color stills, original poster art on the back cover, and film historian Julie Kirgo’s generous and gracious appreciation of the movie.

There are certainly some fine laughs to be had in 8 Heads in a Duffel Bag, but it’s definitely one of those films that depends on one’s mood in order to work optimally, and watching it with a roomful of similarly minded friends would probably be the best bet. There are only 3,000 copies of this Blu-ray available. Those interested in purchasing it should go to either www.twilighttimemovies.com or www.screenarchives.com to see if product is still in stock. Information about the movie can also be found via Facebook at www.facebook.com/twilighttimemovies. 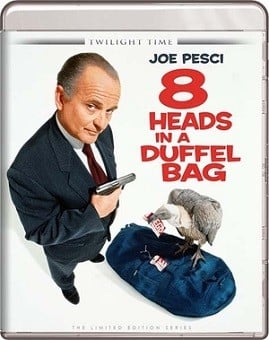