A focus on characters this season lessens the program's adventure quotient. 3 Stars

The over-the-top action and faux super science runs flatly off the rails in season three of CBS’ hit series Scorpion.

The over-the-top action and faux super science runs flatly off the rails in season three of CBS’ hit series Scorpion. The mix of five geniuses and several down-to-earth civilians working together to solve seemingly unsolvable, life-threatening problems is still an appealing one, and the show’s writers have concentrated even more heavily this season on personal relationships and voluble team dynamics (sometimes to the point of irritation), but the plots have become so outrageous that the series oftentimes seems more a comedy than a genuine adventure thrill ride.

The make-up of the squad remains the same from the first two seasons: with a measured I.Q. of 197, Walter O’Brien (Elyes Gabel) continues as the leader of a ragtag squad of fellow geniuses they’ve named Scorpion that can solve the most highly complex problems. On board are fellow geniuses Toby Curtis (Eddie Kaye Thomas), a psychiatrist with gambling addiction issues, Happy Quinn (Jadyn Wong), a mechanical expert who can fix or build just about anything, and Sylvester Dodd (Ari Stidham), a human calculator. Also a part of the team are Paige Dineen (Katharine McPhee) who serves as the conduit between the geniuses and the real world, and their Homeland Security liaison Cabe Gallo (Robert Patrick). Taking an even more of an active role in the team’s activities this season is Paige’s genius twelve-year old son Ralph (Riley B. Smith), whose I.Q. is likely higher than even Walters’ and whose emotional age is, in the tradition of film and television child intellectuals, massively more grounded than the adults in his life. The first half of the season also has Cabe assisted by another Homeland agent Tim Armstrong (Scott Porter) who had joined the team near the end of last season and begun a relationship with Paige, much to Walter’s deep consternation.

The team works together as a kind of multi-headed MacGyver (ironically, a show CBS rebooted this past season to great success) using the strengths that each of masterminds possesses to brainstorm answers to the complex problems which they are presented. This season, they again travel the globe and beyond for their missions venturing into outer space (one of the more outrageously ridiculous episodes), into the middle of the Pacific stranded on a weather buoy surrounded by sharks, Paris, the Amazon rain forest, and a couple of fictional foreign countries. Along the way, they must deal with hackers who imperil the safety of the U.S. by gaining control of nuclear weapons and later try to corrupt the results of the national election (what an ironic turn of events), try to protect an autistic child hunted by mobsters, rescue a woman stuck in the La Brea Tar Pits, thwart a team of counterfeiters (one of the four episodes this season which involve Paige’s insufferable con woman mother Veronica played by Lea Thompson), prevent contamination of the California water aquafer, find a cure for a deadly virus, and test and render harmless a potentially deadly asteroid retrieved from space before it’s exposed to Earth’s atmosphere. In the two-episode season finale, what starts as an easy trip to Tahiti ends disastrously as the team crash lands on an uncharted southern Pacific island and must learn to live together as well as work together to get rescued. While the episodes are all complexly conceived and scripted, there is a growing sameness to the perils week by week that make the episodes rather ludicrous when watched more than one or two at a time. Each mission always begins easily and well and then goes wrong in stages, each stage putting one or more of the team’s lives in danger and requiring greater and greater ingenuity to think their way out of certain death situations which always arise and which are almost always countdowns to ultimate disaster.

Even more than last season, the writers have concentrated heavily on the team’s romantic lives. Sylvester had his love story during the first two seasons, but all of the other characters endure an endless and sometimes tedious series of ups and downs as the season progresses. Happy and Toby do eventually get married near the end of the season though the road to their nuptials is filled with starts and stops. Though Paige and Tim make a terrific couple for the first half of the season with Walter simmering unhappily on the sidelines (and often trying a series of juvenile pranks to break them up), a very convenient job opportunity comes along to remove Tim from the playing field (with Paige not fighting for their relationship at all) and Walter slowly inching his way toward making Paige feel for him the way he feels for her. Cabe also gets a love interest this season in the form of Allie Jones (Reiko Aylesworth), a politician’s aide. With the entire team other than Sylvester coupled at season’s end, season four should offer the expected topsy-turvy travails as we watch the geniuses trying to cope with human emotions they have heretofore never had much success with.

Here are the twenty-five episodes contained on six discs in the third season set:

5 – Plight at the Museum

8 – Sly and the Family Stone

The series is presented in the widescreen television aspect ratio of 1.78:1 and the transfers are anamorphically enhanced for widescreen televisions. Sharpness and color saturation are somewhat uneven in quality in these standard definition transfers.  Softness creeps into various shots on occasion, and color values fluctuate rather wildly in different light conditions with usually accurate skin tones but sometimes with colors that are too hot. Contrast has been consistently applied, however, and black levels can still be very impressive. There are issues with occasional moiré patterns and aliasing spotted in several episodes. Each episode has been divided into 6 chapters.

Broadcast television doesn’t get much better than the audio mixes for this action series presented here in Dolby Digital 5.1 (a Dolby Digital 2.0 stereo surround track is also provided). The driving and quirky music by Brian Tyler and Tony Morales gets impressive spread through the front and rear channels. Dialogue has been well recorded and has been placed in the center channel. Atmospheric effects get the split surround treatment with impressive pans through the soundstage during high speed chases, and fairly frequent explosions really rock the LFE channel.

You’re Invited (7:45): producer Nicholas Wooton and actors Jadyn Wong and Eddie Kaye Thomas talk about the erratic route to the wedding for Happy and Toby.

Scorp Beats (9:45): composers Brian Tyler and Tony Morales talk about their approach to the music for the show and are praised for their efforts by producers Agatha Warren, Nick Santora, and Nicholas Wooton.

Mock Me Up  (5:59): graphics designer Marissa Zajack discusses her job of creating all of the signage, logos, and products used on the show. Special emphasis is given to the show’s popular creation Super Fun Guy.

The third season of Scorpion finds the adventures more off-the-wall than ever and the personal lives of the characters more focused on to the detriment of the series’ adventure element. Those who enjoy the romantic quirks of the show’s make-up should be very happy with the progress of the show during season three. All others may prefer the show’s first two years. 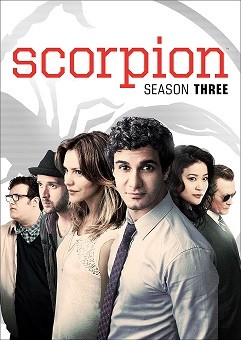