Forum List What's new Dark Style Change width
Log in Register
What's new Search
Menu
Log in
Register
Navigation
Install the app
More options
Dark Style
Close Menu
Posted on October 10, 2017 by Timothy E
You are using an out of date browser. It may not display this or other websites correctly.
You should upgrade or use an alternative browser.
21st Century reboot is recommended to fans of Riggs and Murtaugh. 4 Stars

Mel Gibson and Danny Glover played Martin Riggs and Roger Murtaugh memorably in 4 Lethal Weapon films directed by Richard Donner. The Lethal Weapon action movie franchise is remembered fondly by many fans, and there was understandable skepticism when it was announced that Lethal Weapon would be rebooted as a weekly TV series on the Fox Network. Fortunately, the writers and producers of Lethal Weapon the TV series have an excellent understanding of the characters and the concept that makes this weekly series something special for fans of the film franchise. Although it might be hard to imagine anyone other than Gibson and Glover playing these characters, the cast and supporting cast deserve credit for inhabiting these characters in a way that honors the films without slavishly following them.

The Lethal Weapon of the title refers to Martin Riggs (Clayne Crawford), a loose cannon Los Angeles police officer with a specialized military training and a death wish. Roger Murtaugh (Damon Wayans) is a seasoned police officer who finds himself unwillingly partnered with Riggs. Murtaugh is a family man with more to live for than his partner: Murtaugh has a loving wife, Trish (Keesha Sharp), a criminal defense attorney, 2 teenage children, Riana (Chandler Kinney) and RJ (Dante Brown), and a newborn daughter, Harper. Riggs is suicidal and feels he has nothing to live for after recently losing his wife Miranda (Floriana Lima) and unborn child.

Although minor changes have been made to the concept in this TV series, the writers and producers of Lethal Weapon deserve credit for preserving and reviving the best aspects of the film franchise. Although change for the sake of change can be off-putting, the changes in the characters do not detract from the concept. In this iteration, Martin Riggs is a former Navy SEAL, rather than a Green Beret as he was in the films. As in the films, there is some question whether Riggs’ wife Miranda (named “Victoria” in the films) was the victim of a genuine automobile accident or a “hit” by criminals with a grudge. Riggs’s suspicions that it was not a real accident are a subplot that plays out over the course of this first season. Miranda’s father Ronnie Delgado (Tony Plana) is the L.A. City Attorney, which helps to explain how Riggs and Murtaugh seemingly get a pass for the mayhem and destruction that follow in their wake. Riggs and Murtaugh are often brought to answer by Captain Brooks Avery(Kevin Rahm), Murtaugh’s former partner who is not entirely unsympathetic to Roger’s situation. Dr. Maureen Cahill (Jordana Brewster) is Riggs’ department mandated therapist who must decide if Riggs is even suitable for continuing on active duty.

Wayans and Crawford have genuine screen chemistry as partners, and both actors deserve credit for making these roles their own while following actors originating these roles in the film franchise. The leads also benefit from a great supporting cast of characters that are original to this series. Medical examiner Scorsese (Johnathan Fernandez), so named because he went to film school and writes scripts, is often helpful to Murtaugh and Riggs. Detective Bailey (Michelle Mitchenor) and Detective Cruz (Richard Cabral) also back up the leads in their unusual situations. The original supporting cast gives the series a depth that would be wanting if the focus was entirely on the Lethal Weapon and his reluctant partner.

The series also gives interesting nods to developments in the film franchise. Leo Getz (Thomas Lennon) is an ambulance chasing lawyer (rather than a mob accountant) who appears occasionally but is not so overused as to overstay his welcome. Karen Palmer (Hilarie Burton) is a DEA agent and possible love interest for Riggs, reminiscent of Lorna Cole (Rene Russo) in the film series. The TV series has been developed by 2 producers who collaborated previously on Forever, Matt Miller and Jennifer Gwartz. Gwartz actually worked on Lethal Weapon 4 and was instrumental in bringing Miller in to develop this TV series. The first 2 episodes were directed by McG(Charlie’s Angels), also an executive producer on this series. On top of everything else that this reboot gets right, the stunts and action set pieces in Lethal Weapon Season One are consistently high caliber and more than a notch above typical television fare.

All 18 episodes of the first season are included on 3 Blu-ray discs:

Pilot(46:04): Murtaugh meets his new partner as they pursue the killer of a Navy SEAL whose suicide was staged.

There Goes the Neighborhood(43:35): Riggs and Murtaugh investigate burglaries in the neighborhood.

Ties That Bind(42:51): One of Miranda Riggs’ friends may be tied to the strange death of a model.

Fashion Police(42:59): A murder investigation in the fashion industry causes conflict with an active DEA case, and agent Karen Palmer.

Can I Get A Witness?(44:01): Riggs finds his humanity as he helps a young boy who witnessed a casino heist.

Jingle Bell Glock(44:02): An investigation into the Mexican drug cartel that Riggs hunted in Texas comes close to home for the partners on Christmas Eve.

Lawmen(44:32): The murder of a Texas Ranger consumes Riggs.

Brotherly Love(43:59): A car theft ring and a stolen car full of cocaine provides their leads.

The Seal is Broken(43:22): The anniversary of Miranda’s death haunts Riggs as they investigate violent crimes tied to the members of a church.

A Problem Like Maria(43:54): Agent Palmer brings Riggs into some previously unknown connections to a Mexican drug cartel.

Commencement(45:02): Murtaugh reconsiders his priorities as Riggs’ investigation leads him south of the border.

The episodes are included on the 3 discs in broadcast order rather than production order. The Christmas episode, Jingle Bell Glock, was the tenth episode produced, but was moved up in rotation so that it could air before Christmas, since the 2016 World Series delayed at least one airdate. The next 2 episodes to air, Homebodies and Lawmen, were the 11th and 9th episodes produced, respectively. The order of broadcast otherwise mirrors the production order of the episodes. Although some of the episodes are loosely connected with subplots involving the investigation of Miranda Riggs’ death primarily, there are no continuity errors created by viewing the episodes in broadcast order rather than production order.

Lethal Weapon The Complete First Season appears on Blu-Ray in 1080p in its original 1.78:1 aspect ratio.   If any episode were to suffer from compression artifacts, it would be Homebodies which had a number of scenes during a rave with a lot of movement and strobe lights.  This episode looks noticeably better on Blu-ray than it did in HD broadcast.  Although the episodes are 6 to each disc, the video quality is excellent.  Blacks are solid with very sharp fine detail.  Colors are vibrant where appropriate.  This series is definitely a big step up in video quality on Blu-ray over High Definition broadcast or streaming.

The English Dolby TrueHD 5.1 soundtrack packs a great punch for the explosions and gunshots that are expected for this series.  The sound mix is always appropriate for dialogue in relation to music and sound effects.

Special features are spread out over all 3 discs and include all of the following:

Extended Pilot (Uncensored)(47:01):   This version runs approximately 1 minute longer than the regular version and includes uses of a word that you still cannot say on network television.  (Hint: the word was used memorably by Bruce Willis in Die Hard.)

Reloading Lethal Weapon:  Executive producers Matt Miller and Jennifer Gwartz have a discussion with Johnathan Fernandez(Scorsese) regarding the challenges of rebooting the Lethal Weapon franchise for television.

Gag reel(2:53):  Collection of funny outtakes from the first season.

The special features are comprehensive and worthwhile viewing.  There are a couple of omissions that would have been welcome on this set.  There is some minor footage from the pilot episode that was included in a network trailer that is not included on this set, and a series of commercials for Microsoft Surface featuring Johnathan Fernandez in his role as Scorsese that appeared on broadcast with the following episodes:  Ties That Bind, Fashion Police, Homebodies, and Lawmen.  Each commercial was unique to the respective episode and had Scorsese explaining to Bailey(Michelle Mitchenor) how he processed the evidence in that episode with the help of the Microsoft Surface.  Although the product placement was overt, the commercials were well designed to tie into the specific episode.  The commercials are not included as special features on this set.  That being said, the deleted scenes are well worth viewing and recommended to supplement the episodes.

Lethal Weapon The Complete First Season on Blu-ray is highly recommended to fans of the film franchise. Clayne Crawford and Damon Wayans have inhabited these roles and made them their own, and the supporting cast gives the series a richness beyond the films. The writers and producers of this series clearly love the films and understand the best aspects of what worked well in the movies and have translated it well into a weekly TV series. The video and audio presentation on this Blu-ray set are seemingly flawless. The special features are excellent; the deleted scenes really add to the episodes, particularly for the season ending episode Commencement. The second season has recently started airing on the Fox Television Network, and this set is a great way to catch up before watching the new season. 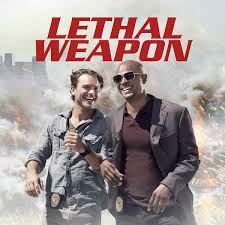