It’s pretty ironic that one of the most lauded and long-lasting cult phenomenons of recent television history – Buffy the Vampire Slayer – was instigated by a rather lame, erratically written, directed, and acted horror comedy.

It’s pretty ironic that one of the most lauded and long-lasting cult phenomenons of recent television history – Buffy the Vampire Slayer – was instigated by a rather lame, erratically written, directed, and acted horror comedy. Fran Rubel Kuzui’s 1992 Buffy the Vampire Slayer is plagued by indifferent casting, some unappealing characters, spotty direction, and a rather threadbare narrative. In every way, Joss Whedon’s germ of an idea about a teenaged “chosen one” whose destiny is to fight all the vampires who come her way was improved, expanded, and refined in tone once Whedon took his idea to television.

Airhead cheerleader Buffy Summers (Kristy Swanson) is never the same after she meets Merrick Jamison-Smythe (Donald Sutherland). Merrick tells the teen that he’s been sent to train her to fight vampires, she the latest in a long line of female vampire slaying warriors. Taking her under his wing, Buffy is a quick study and soon takes student loner Oliver Pike (Luke Perry), whose best friend Benny (David Arquette) has already been turned into a bloodsucker, as a disciple repeatedly saving him from fierce attacks. But, when a very dangerous centuries-old vampire Lothos (Rutger Hauer) whose sworn mission is to eliminate all vampire slayers comes specifically for her, Buffy must go to war again even in the midst of her school’s senior dance.

Joss Whedon’s idea of a vapid Valley Girl savior of mankind is funny for about two seconds, but his screenplay makes every inhabitant of Hemery High School, students and adults alike, at near-cretin level, and it wears out its welcome faster than one might imagine (no one notices basketball players with demon ears and bloody fangs twice as long as regular teeth). Whedon’s now-familiar, then-unknown mix of deadpan reactions to completely over-the-top situations doesn’t play especially well when one is saddled with a director as uninspired as Fran Rubel Kuzui who stages action scenes clumsily and awkwardly (two combatants sallying forth with others just standing still watching; Buffy has no reaction when her mentor finally bites the dust right beside her) and without instilling any sense of danger or fright into the mix (the great thing about horror comedy Scream was that it was both funny and edge-of-your-seat scary). There’s Buffy’s training montage that is reasonably entertaining and a couple of sight gags (Buffy catching a knife hurled at her, a vampire’s arm that gets lopped off) manage to generate a few laughs, but that’s a meager quotient even for a movie that runs only eighty-five minutes.

Very few of the actors playing high school students can pass easily for teenagers; future Oscar-winner Hilary Swank who plays Buffy’s friend Kimberly was 18 when this was filmed, but leads Kristy Swanson and Luke Perry definitely are past the teen years. She displays very limited acting skills through much of the movie (Whedon did a masterful recast of the role with Sarah Michelle Gellar for television) though she handles the cheerleading and tumbling duties with aplomb. Perry is slightly colorless, too, though the role was obviously not fleshed out nearly as well as the title character. Donald Sutherland gives it the old veteran’s try to instill some interesting eccentricity into the role of Merrick, and he and Paul Reubens as Lothos’ head henchman Amilyn walk away with whatever acting honors are to be had here. Rutger Hauer is frightfully disappointing as Lothos; instead of making his role a mix of appealing sexual suavity and brutal savagery that held Chris Sarandon in such good stead in Fright Night as the vampire villain of that piece, Hauer basically walks through the movie with a wry grin on his face exuding neither shuddery menace nor overpowering sex appeal which vampires often, but not always, use as a lure. In addition to Hilary Swank, Paris Vaughan and Michele Abrams complete the trio of valley girls joined to Buffy at the hip until her interest in vampire slaying takes her away from their intense focus on cheerleading, shopping, and boys. David Arquette has a moment or two to shine as Pike’s vamped best friend, and look closely to see in tiny roles Candy Clark as Buffy’s mom, Ben Affleck as a rival basketball player, and Liz Smith as a TV reporter covering the strange events at the school dance in a coda sequence.

The film has been framed at 1.85:1 and is presented in 1080p resolution using the AVC codec. Sharpness is usually very good except in some early long and medium shots where images are softer. Color is always under control and nicely saturated with believable skin tones. Grain levels in the transfer vary quite noticeably, however. Black levels are nice and deep with agreeable shadow detail. The movie has been divided into 30 chapters.

The DTS-HD Master Audio 7.1 sound mix seems like a rather erratic remix from original elements. Much of the film’s surround elements are frontcentric with occasional atmospheric effects (a shriek, a passing car) tossed into one of the rear channels at odd moments. Dialogue has been adequately recorded (though some of the dialogue seems a bit low in the mix) and has been placed in the center channel. Carter Burwell’s score gets nice placement in the fronts and rears through in the first part of the movie especially it seems to be more front-directed, too.

The original movie version of Buffy the Vampire Slayer seems a pale, rather lackluster mix of comedy and horror compared to the evocative, deeply felt, and appealing television series which followed and enjoyed a seven-year run. The Fox 25th anniversary release on Blu-ray offers decent audio and video quality, but the material is so wan that only real fans will probably be interested. 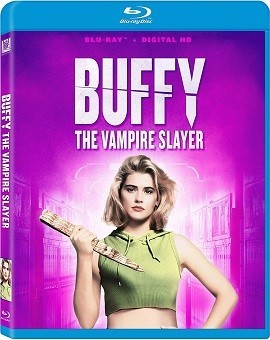