Forum List What's new Dark Style Change width
Log in Register
What's new Search
Menu
Log in
Register
Navigation
Install the app
More options
Dark Style
Close Menu
Posted on October 9, 2017 by Matt Hough
You are using an out of date browser. It may not display this or other websites correctly.
You should upgrade or use an alternative browser.
Average, predictable made-for-home video western 2.5 Stars

Recent attempts to revitalize the western through made-for-home video releases have been rather muted and inert, and no better example of that exists than Richard Gabai’s Justice.

Recent attempts to revitalize the western through made-for-home video releases have been rather muted and inert, and no better example of that exists than Richard Gabai’s Justice. With a decent physical production and some reasonably accomplished actors, Justice could have been much better than it’s turned out to be due to the very indolent writing and mundane direction that plague the production. Western fans will have to look elsewhere for a savior.

When he receives word from his estranged minister-brother Thomas (Jackson Rathbone) that his life is in danger and the area is on the verge of a revolution, U.S. Marshal James McCord (Nathan Parsons) arrives in the small Nevada township only to find that his brother’s church has burned to the ground with him inside. Widow Melissa Pope (Jamie-Lynn Sigler) has a box of Thomas’ belongings including a journal which details the location of an abandoned mine which is being used as a weapons storehouse for an impending war to establish the Western Republic with corrupt town mayor Pierce (Stephen Lang) as the President. Pierce has the entire town under siege using hired gun Reb (John Lewis) and his henchmen to carry out his widespread intimidation tactics to keep the ordinary citizens in line. It’s up to McCord to find significant evidence against Pierce and his gang before local Army Captain Lewis (Cru Ennis) will move in to help put a stop to Pierce and his corruption.

The screenplay is by four hands: John Lewis, Shawn Justice, D.C. Rahe, and Jeff Seats, but their story doesn’t often ring true with the marshal subjected to separate beatings and a public lashing with no intervention by the army or other governmental officials. When the army finally does intercede, it’s at the behest of the pretty young town widow rather than by any concrete evidence McCord has offered up to the army captain (though he provided the captain with evidence earlier which it seems the army didn’t bother to investigate). As usual in these stories, the townsfolk are content to be mistreated and bullied without anyone banding together to do something about the corruption, and deaths happen regularly without any investigations or consequences (at one point, the captain reminds the marshal that it’s his job to keep the peace and the army’s job to carry out the laws, but they seem to be completely impotent). The narrative provides for fistfights, gunfights, and some tentative stabs at romance, but director Richard Gabai hasn’t managed to instill much urgency into the pacing of his movie, and the set-ups and staging are all quite rudimentary. A showdown at the abandoned mine midway through the film (which doesn’t quite jell when gunpowder is exploded but most of the weapons and dynamite as well as the cave itself remains intact) and the climactic shootout to free the marshal from unjust imprisonment are the closest the movie comes to action set pieces, but each has its problems with staging and sustaining tension.

Veteran actor Stephen Lang plays the dissolute mayor admirably, the kind of thoroughly evil character that this wonderful actor can perform in his sleep, but the script doesn’t offer him much in terms of a dimensional character. Nathan Parsons has an adequate amount of charisma for the leading role though Jackson Rathbone, who plays his brother, has a more forceful presence in the several flashback scenes we get watching him cope with the evil in the town. Jamie-Lynn Sigler is a passable leading lady though she delivers some lengthy speeches with a too-studied approach to the words themselves and comes off a bit stilted at times. John Lewis, who contributed to the script and is also one of the film’s producers, displays a decent amount of sinister malevolence as the vicious Reb. Quinton Aaron has some moments of real dignity as the town’s downtrodden blacksmith, and Robert Carradine and Lesley-Anne Down make notable appearances as Melissa’s parents.

The film is framed at 1.78:1 and is presented in 1080p resolution using the AVC codec. Sharpness is quite good throughout allowing the make-up effects on actor Nathan Parsons’ torso after his beatings and lashings to look very real. Color seems a bit desaturated though skin tones remain realistic. Contrast seems a trifle milky at times for no good reason, but black levels are very good. The movie has been divided into 20 chapters.

The DTS-HD Master Audio 5.1 sound mix is rather ordinary. Dialogue has been well recorded and has been mostly routed to the center channel apart from some late movie directional usage in the surrounds. Atmospheric effects seem much more frontcentric than necessary especially with the shootouts which climax the picture. The most consistent use of the fronts and rears comes with the background music score by Boris Zelkin which offers nice immersion.

For a made-for-home video release especially among western fans, Justice may be an adequate time filler with its predictable story and standard characters, but the film could have been so much better with stronger storytelling and more inspired direction. 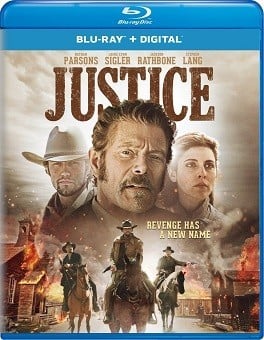