Forum List What's new Dark Style Change width
Log in Register
What's new Search
Menu
Log in
Register
Navigation
Install the app
More options
Dark Style
Close Menu
Posted on March 4, 2019 by Matt Hough
You are using an out of date browser. It may not display this or other websites correctly.
You should upgrade or use an alternative browser.
Another Golden Age 3D title comes home to roost. 3.5 Stars

Another welcome film from the Golden Age of 3D joins the fold with Kino’s release of Jivaro, another fantastic job by the 3-D Film Archive in bringing a nearly unseen 3D film back to lovers of the format.

For most people viewing Edward Ludwig’s Jivaro on home video, this latest release from Kino Lorber will be their first opportunity to ever see the movie in its originally filmed 3D format. During the film’s 1954 theatrical release, Paramount sent the movie out flat in 2D rather than going to the additional expense and trouble of releasing it in 3D thereby ending Paramount’s association with the troubled format. And that’s a shame because 3D is one of the more positive elements in this otherwise standard adventure flick of the period. There’s also rich Technicolor along with the inventive 3D camerawork, all brought to us through the dedicated talents of the 3-D Film Archive who notch another triumph with their outstanding production of this fabled 3D effort.

South American jungle trader Rio Galdez (Fernando Lamas) volunteers to lead beautiful and alluring Californian Alice Parker (Rhonda Fleming) to her often drunken fiancé Jerry Russell (Richard Denning) who has allegedly found gold in a Jivaro shrine located in the remote Valley of the Winds. The problem is that the Jivaro are headhunters, and getting to the shrine will be a death-defying ordeal. Along with Rio and Ms. Parker are gold prospectors Tony (Brian Keith) and Vinny (Morgan Farley) who have tired of their penny ante prospecting efforts and long for a huge payout which Jerry’s discovery may afford them if they can get out of the valley alive.

Winston Miller’s screenplay (based on a story by David Duncan) neatly divides itself into three acts with the introduction of the characters and setting in the film’s first thirty minutes, the conflicts which arise between Rio and Tony for the favors of Ms. Parker (Rio is trying to keep her safe rather than trying to win her for himself even though he knows the alcoholic, lying Jerry isn’t worthy of her) in the second third, and then the climactic adventurous safari to find the missing Jerry and escape with their lives gold or no gold. Because so much of the film is set bound and not shot on location, the perils they face on their journey to the treasure seem somewhat small in comparison to the events in jungle epics like King Solomon’s Mines, but there are still some pleasures to be had as the explorers face hostile snakes, rotten suspension bridges, hurricane-level winds, and murderous natives. 3D really enhances the beautiful Technicolor photography and gives much wanted-and-needed depth to those jungle scenes (in 2D, the jungle is much less impressive or expansive). Director Edward Ludwig handles the jungle adventures in rather rudimentary fashion apart from a clever overhead shot above the bridge as it collapses, but it all moves along at a steady clip.

Fernando Lamas’ Rio shows admirable restraint through much of the film with the devastatingly beautiful Rhonda Fleming as Alice. Once it’s clear that she’s under no further obligations to Jerry, however, there is the build up to a passionate kiss, but the film curiously fades out just at the moment many in the audience might have been waiting for. Otherwise, both actors look gorgeous and handle their scenes smoothly (there’s an enjoyable eating scene where Fleming’s Alice must feign enjoyment of some gag-inducing fish chili prepared by Lamas’ Rio), and they allow Brian Keith in one of his earliest film appearances to walk away with the movie as the calculating, two-fisted hedonist Tony. Popping in for small roles are Lon Chaney as a cheating storekeeper, Rita Moreno as a fiery native girl who had become Jerry’s kept woman in the jungle, Richard Denning out of character as the stumbling, drunken architect Jerry Russell, Marvin Miller as the threatening Jivaro chief, and Pascual Pena and Morgan Farley as loyal right-hand men to Rio and Tony respectively.

The film has been framed at 1.66:1 for this video presentation and is offered in 1080p resolution using the MVC (3D)/AVC (2D) codec. Apart from a single white scratch, a bit of color fringing, and a dust speck here and there, this is another triumph for the 3-D Film Archive who has done a remarkable job cleaning the film and bringing it up to modern expectations (just look at the dirty, speck-filled trailer to realize how much work needed to be accomplished on this vintage film). Color is excellent throughout always matching and sometimes outpacing the beauties of the previous Sangaree and Inferno. Skin tones are particularly appealing. The movie has been divided into 10 chapters.

From the moment the opening credits appear many feet in front of the screen, you know you’re in for a tremendous good time with the 3D implementation. The cinematography emphasizes the differing viewing planes throughout (stock shots that aren’t in 3D are noticeable but not at all problematic), and there is no crosstalk whatsoever in this presentation. Forward projections in addition to the main titles are plentiful, most notably a shrunken head that is thrust into our faces on two occasions but also including poles, bottles, vases, chairs, spears, and arrows that come hurtling toward the camera. Depth in the studio sets is constantly enhanced by the use of 3D.

The audio is presented in DTS-HD Master Audio 2.0 mono. It’s a strong, solid track unencumbered by any age-related problems with hiss, pops, flutter, or humming. Dialogue is always completely discernible and has been mixed well with Gregory Stone’s background music and the many sound effects (with the rain storms and wind especially strong components).

Audio Commentary: Members of the 3-D Film Archive share their areas of expertise with the listener. Jack Theakston and Hillary Hess provide lively and entertaining historical commentary on the actors in the film and the movie’s place in the history of 3D. Greg Kintz discusses 3D alignment and color correction necessary to bring the movie up to modern standards, and Mike Ballew offers learned technical expertise on the variable parallax at play in the film’s complex cinematography.

A Shot by Shot Stereoscopic Analysis (8:26, 3D): a section of the movie is overlaid with information on the lenses and photographer’s range of focus for each shot.

Kino Trailers (HD), trailers for other 3D releases from Kino include Cease Fire, Sangaree, Those Redheads from Seattle, and The Maze (in 3D).

Another welcome film from the Golden Age of 3D joins the fold with Kino’s release of Jivaro. The 3-D Film Archive has done another fantastic job in bringing a nearly unseen 3D film back to lovers of the format, and this presentation likely couldn’t be bettered.

They Won't Believe Me [Blu-Ray]

Thanks very much Matt but just to be clear: that image is not from the new restoration!

Bob Furmanek said:
Thanks very much Matt but just to be clear: that image is not from the new restoration!
Click to expand...

Sorry, Bob. I have to take what I can get at Google Images, and the pickings were slim.

I can’t wait for the release date - very excited for this one!

Thank you for this review, but I don't know about this movie. I'm not a fan of Lamas so I'm not sure I want to do a blind-buy on this title.

Well I've already pre-ordered mine and I can't wait. Literally. 3DFA makes me wait so damn long between releases (like this) that I do want that I wind up having to buy the ones I don't want (APE, Stewardesses) just to feed my golden/silver-age 3D jones....

Why do I keep seeing that picture as standins, an abandoned set of actors, or an audition tape for African Queen.

I love these releases and am collecting them all. Universal, TT and WB (?) I think have put out a few of these vintage 3D films, but 3DFA does the best job on them. Even when the movies themselves are not that great, they are a guilty pleasure and a feast for the eyes. Especially in widescreen and technicolor! Always feels like a time traveled to the 1950s.

Robert Crawford said:
Thank you for this review, but I don't know about this movie. I'm not a fan of Lamas so I'm not sure I want to do a blind-buy on this title.
Click to expand... 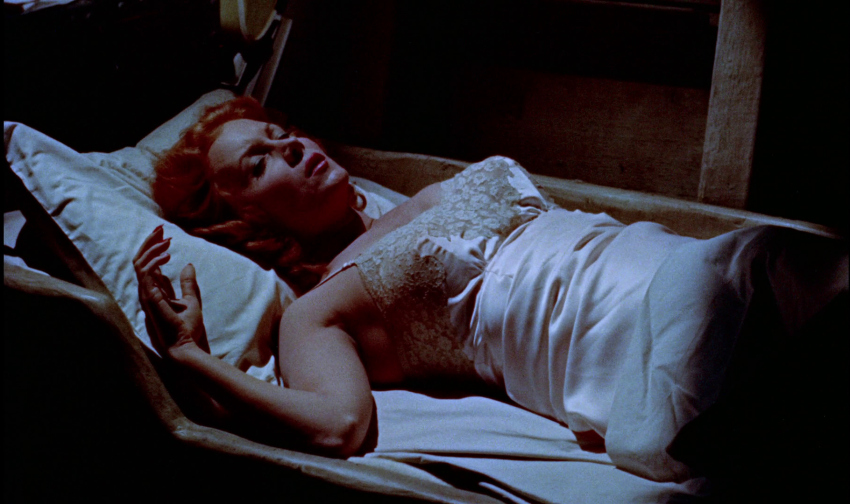 She's the reason why I'm considering it.

Really looking forward to this!

Here's An In-Depth Look at JIVARO by Hillary Hess. You'll get to hear Ms. Hess on the commentary track too!

The commentaries that your group records are always among my favorites. Great blend of information, anecdotes and good personalities. I’m looking forward to this one too!

I need to warn the wife that this will be the movie selection of the night on its release date!

I got an email from Amazon today saying my pre-order now qualifies and will get delivery on the day of release. I'm really looking forward to it.

Josh Steinberg said:
The commentaries that your group records are always among my favorites. Great blend of information, anecdotes and good personalities. I’m looking forward to this one too!

I need to warn the wife that this will be the movie selection of the night on its release date!
Click to expand...

Thank you very much, Josh.

Hillary Hess, Jack Theakston, Greg Kintz and (making his first of many commentary track appearances) Mike Ballew really hit a grand slam on this one.

I must say - in my humble opinion - with their scholarly discussion of lens and variable interaxial settings, convergence and other technical matters with the remarkable Paravision camera rig, it is by far the most comprehensive and technically informative commentary track on any vintage 3-D feature to date!

I still need to catch up before this is released. Haven't yet watched Sangaree (or Miss Sadie Thompson, for that matter).

Finally watched Sangaree last night. If this is anything like that one, we're in for a great treat! Hopefully Jivaro is actually a better movie than Sangaree, but the presentation was nearly flawless to my eyes, especially considering the elements the 3D Archive had to work with. Awesome job!

Ordered!!! Bob, thanks SO much for your team's efforts on these wonderful 3D restorations!!!

I think the color is stronger on Jivaro than on Sangaree. Just personal opinion, of course, but I found the color here very appealing throughout.
You must log in or register to reply here.