I'm making a guess that this film being shot with a variable interaxial may have made the camera team more aware of everything 3D. This film has the most perfect 3D shots that I have seen from a mid-1950s era film. Everything seems right with the 3D framing and convergence.
Reactions: Interdimensional, phillyrobt, Josh Steinberg and 2 others 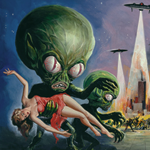 
disctrip said:
Just watched it and it was "O.K." It was way too "Stage-bound" for me. If you are going to shoot in Florida, shoot on location somewhere.
Click to expand...

The Florida footage is just a handful of establishing shots with stand-ins doubling for the actors. That seems to have been how Pine-Thomas productions operated.

Actually I thought it was artfully done for what it was.

Funny how Paramount had their Paravision 3D rig lugged all the way out to shoot a whole film in wartime Korea for Cease-Fire, but on Jivaro, location shooting in United States was sufficient a challenge to limit it to 2nd unit work. To my way of thinking, constructing an artificial jungle would be a daunting challenge, but obviously it was something they were very comfortable doing and had everything they needed on hand to turn things out more efficiently. In subesequent years when location shooting became more commonpace, I sometimes feel as much as they gain in many respects, films lost the make-believe fantasy quality that comes from working within the limitations of sets and matte paintings.


aPhil said:
I'm making a guess that this film being shot with a variable interaxial may have made the camera team more aware of everything 3D. This film has the most perfect 3D shots that I have seen from a mid-1950s era film. Everything seems right with the 3D framing and convergence.
Click to expand...

They would've presumably been filming this at a time when 3-D was under fire and drawing a lot of the usual complaints about eye strain. They could've gone the cautious route and just dialed everything down to the minimum, but that doesn't seem to have been the case.

Mike Ballew has put together a one of a kind extra, and in watching it, I tried to understand the thinking behind the choices they made. One can have one's theories, of course I don't claim to know. I notice in the outdoor set during the Jivaro trading scene, they reduce the interaxial for what may have been problematic scenes, but are quick to return to full 2 1/2 inches. The interior Lon Chaney scene seemed to use reduced interaxial in most shots, with a lot of precise adjustments made from one shot to the next.

The modern trend with native stereo cinematography produced a lot of subtle, shallow 3D. I sometimes got the impression modern stereographers were under pressure to set it and forget it at a point where nothing can go wrong or seem too strong, and only increase the interaxial for a handful of scenes. I don't think that's the approach they had on Jivaro, rather they seemed to want to use natural interaxial as much as the shot would allow, and reduced the interaxial mostly to allow them to shoot at angles and distances they might have otherwise avoided.
Reactions: Bob Furmanek, revgen and Josh Steinberg
You must log in or register to reply here.
Share:
Facebook Twitter Reddit Pinterest Tumblr WhatsApp Email Link