Posted on January 30, 2017 by Neil Middlemiss
A disappointing sequel 3 Stars

A less accomplished and engaging follow up to 2012’s Jack Reacher, Never Go Back does entertain but it lacks the authentic personality of its predecessor. With somewhat respectable world-wide box office business, (though once again less that Paramount would have liked), it’s possible this film could mark the last outing for Tom Cruise in the Jack Reacher role. A shame, as there is plenty that could be done with this character should it continue. As movie entertainment goes, Never Go Back is okay, but it won’t last in your memory. It doesn’t standout or have enough going for it to earn much more than a barely passing grade.

“You think you’re above the law, but I’m not the law so you should start running because I’m going to start hunting, and when I find you I’m going to kill you all.”

Jack Reacher (Tom Cruise), formerly a Major in the military, continues his solitary drift across America, righting wrongs wherever he finds them. Having wrapped up a case of human trafficking, working remotely with Major Susan Turner (Cobie Smulders), whom he has never met but has formed enough of a friendly banter that they plan to meet up should he ever make his way to Washington D.C. where she is stationed – Reacher makes his way back on the road. Alone. Perhaps tiring of the unending solitude, he decides to make his way to the American capital and call upon Major Turner. But when he arrives, he finds a replacement sitting in her office and is told that Major Turner has been arrested and accused of espionage. Reacher smells something off and begins to investigate. But when those he talks to about the case start turning up dead, he becomes a wanted man. Breaking Turner out of holding, the two find themselves on the run, desperately trying to uncover the conspiracy. Complicating their mission is Samantha, a young girl that may be Reacher’s daughter (from a short relationship years earlier) – and even if she’s not, those pursuing them believe that she is, placing her in danger.

Lee Child’s Jack Reacher character remains popular among readers. And I can see why. Though Lee tends to write with a straightforward, no-nonsense voice, without desire for literary flourishes or any semblance of grand or poetic air, he knows how to take his Jack Reacher character into, and through, mystery and danger. Whereas Christopher McQuarrie, writer and director of 2012’s Jack Reacher film (based on the book One Shot) fashioned a film ripe with 1970’s movies gritty DNA, giving it a flavor and presence refreshingly different from what the cinema tends to offer these days, Director Ed Zwick (Glory, The Last Samurai) brings no cinematic personality to the picture, which is perhaps the film’s most prominent hamstring.

2012’s Jack Reacher was a simple enough story; a little mystery, sufficient bravado, a number of solid opportunities for the Jack Reacher character to show off just what he’s so good at, and a bit of a twist here and there to add more interest. But on its own, the film’s story was nothing remarkable. However, with McQuarrie’s taut direction, that bias of 70’s cinematic grit, and Cruises’ fine embodiment of the role (despite being considerably shorter than the character that appears in the books), the movie was greater than the sum of its parts. The sequel, lacking that established cinematic identity which may have smoothed over the flaws, lays those flaws bare. The entire affair, capably directed, capably plotted, with an unremarkable yet serviceable plot, solid performances with likeable supporting characters, somehow ends up less than the sum of its parts.

As entertainment, Never Go Back is just fine, but it falls noticeably behind its predecessor. Tom Cruise remains engaging. At 55, he is no less the daring action star, handsomely executing fist fights and car chases as ever before. Though his performance of the Reacher character doesn’t feel as true in this sequel, at least not in the way of his commanding presence in the first film. As his primary co-stars, Cobie Smulders as Major Susan Turner and Danika Yarosh as the young Samantha who may be Reacher’s daughter, add interesting elements to the Jack Reacher formula. Smulders in particular is an engaging balance of military competence and standoff-ish partner to Reacher who prefers working alone. Aldis Hodge does well here too as Espin, a military man who doesn’t know who to trust and we don’t know if we can trust him. He’s a likeable actor with a very non-nonsense way about him that works for the Aldis character (check out my interview with Aldis Hodge here – coming soon). Together they form a likable cast.

After Jack Reacher, I wanted more of this character on the big screen. I still do, but not if they don’t recapture the tone and perfectly suited execution that came with it. Never Go Back is pulpier, largely generic, lacking personality and authenticity, with a Jason Bourne-style score by Henry Jackman that is many steps back from Joe Kraemer’s excellent, simmering score to the first film (available from La-La Land Records).

In short, Jack Reacher: Never Go Back is a pale imitation of 2012’s Jack Reacher instead of the engaging expansion of the Reacher world that we wanted and needed. Hopefully, it’s not too late.

Paramount delivers Jack Reacher: Never Go Back on Blu-ray with a fine transfer. Flesh tones are accurate, black levels deep, and there is a fine level of detail and texture to be found throughout the runtime. This isn’t a visually distinct film. There’s no push to desaturate, or oversaturate the colors (which will be a welcome turn for many tired of those trends in cinema), but there isn’t much of an atmosphere generated from the look of the picture. What we do get, though, is an excellent quality presentation of the film.

Paramount is one of the few studios that reliably include Dolby Atmos tracks on their feature releases, and that’s great news for those so equipped. For those not set up for Atmos, the default audio is a brisk and booming Dolby TrueHD 7.1 track that packs a strong punch exactly where it’s needed, especially during the climax in New Orleans, with superbly crafted surround sounds and pulsing music that up the energy. No issues with dialogue being drowned out by the music or sound effects. This is a great audio track.

Not a bad collection of special features. Nothing particularly revealing, but what’s on offer does remain interesting for those looking to dig just a little deeper. This release also came with a short graphic novel, Everyone Talks, the required the standard slipcase to be deeper than normal (meaning if you remove the graphic novel, the Blu-ray case will not fit as snugly).

Reacher Returns – Interview with Tom Cruise about the role of Jack Reacher, and words from other about what the character is to them, and more.

An Unexpected Family – Discussion on the effects of Samantha (and Major Turner) on the Jack Reacher mythos.

Relentless: On Location in Louisiana – A look at the location shoot, including some key scenes.

Take Your Revenge First: Lethal Combat – A peak at the physicality of the character.

No Quarter Given: Rooftop Battle – A look behind the movies climactic sequence.

Reacher in Focus: With Tom Cruise and Photographer David James – Interesting piece on the role of photographing moments on set.

Reaction to Jack Reacher: Never Go Back from audiences and critics alike has been tepid to mixed, and deservedly so. The unremarkable nature of this sequel could be from a decision to model the film after other modern actioners, or it could be that the filmmakers struggled contending with a budget tighter than their vision. Whatever the cause, the resulting seems just so disappointingly ordinary. All the pieces for a great action film are here, both in front of and behind the camera, but it never fits together the way it needs to.

As someone who finds the books just okay, and the first film one of the better action films of the last several years, this follow up comes as a letdown. Executed with technical precisions, acted well, and with several well staged action sequences, it falls short.

Still, I hold out hope that we may yet get another crack at this potential franchise for Cruise and company. 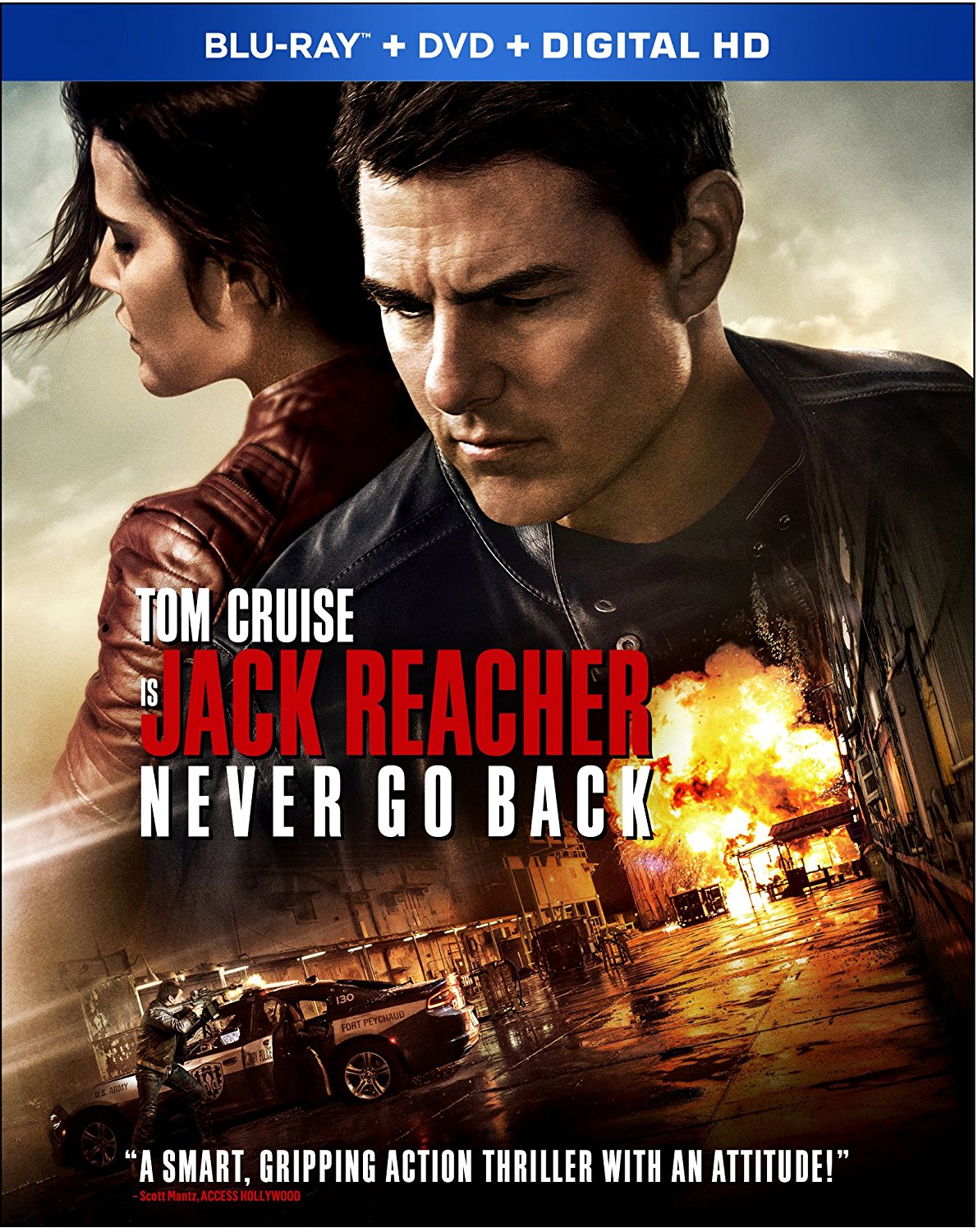