Martin Ritt’s Stanley & Iris isn’t the masterpiece that tighter, more succinct writing and more intensively portrayed emotions might have made it, but it’s a quiet cinematic gem of some dramatic force and containing such beauty that it can’t be fairly ignored.

Director Martin Ritt has a way of sometimes quietly and sometimes jarringly grabbing us by the throats and not letting us go until he’s satisfied. Time and again, in movies as wide-ranging as Norma Rae, Conrack, Sounder, The Great White Hope, Pete ‘n Tillie, Cross Creek, and Murphy’s Romance, we have had our emotional heart strings plucked as often as Anton Karas’ zither. His final film Stanley & Iris continues Ritt’s mastery of extremely affecting filmmaking, and the results are both very low-key and notably touching.

Jane Fonda and Robert De Niro, both two-time Oscar winners, pair up for the first time as two lonely people: she a recently widowed mother of two lost in a dull job and unfulfilling life, and he a shockingly illiterate cook with a knack for inventing things. Offering each other something imminently necessary, the two embark on first a friendship and then an affair. Harriet Frank and Irving Ravetch’s screenplay isn’t especially deep in its analyses of these two very private people (perhaps purposely?), but there is enough material here for the two expert actors to seize and do wondrous things with. Fonda has her best role in years as a proud yet remote widow, and De Niro, as always, is a revelation as a reclusive jack of all trades who has spent his life hiding his secret of illiteracy. Their mutual needs come together in beautifully dove-tailed scenes that resonate in one’s memory long after the film has concluded.

But the screenplay is surprisingly shoddy in handling some of the supporting players. We begin the picture with Swoozie Kurtz and Jamey Sheridan as Fonda’s sister and brother-in-law sharing Fonda’s home until each can find work, but that entire subplot is stopped and dropped after the opening scenes and one other sequence at a family birthday party. These two players are outstanding actors and could have formed an interesting counterpoint to the tentative Fonda-De Niro coupling, and the lack of explanation about their whereabouts was a poor decision. Daughter Martha Plimpton’s illegitimate pregnancy is another plot thread picked up and too easily discarded in the script. The problems an additional mouth bring to the family is mentioned by Fonda before the birth but then not handled as well as it could have been merely by showing us Plimpton quitting school and going to work in the same dead-end job as her mother has. Three other wonderful actors are part of the supporting cast at the bakery and are given almost nothing to do: Zohra Lampert, Loretta Devine, and Mary Testa. On the other hand, Feodor Chaliapin as De Niro’s elderly father offers a beautiful performance in just a couple of scenes, and Harley Cross as Fonda’s son Richard has a telling moment with De Niro in a park where we learn that Stanley is really quite brilliant with a keen and searching mind.

But the pleasures here are manifold. At least four scenes qualify as instant classics: a birthday party for Fonda’s youngest child which leads to a marvelous bout of sibling affection, De Niro and his aged father coming to terms with each other at an old age home (the film’s most heartbreaking moment), De Niro asking Fonda for help in learning to read during a downpour, and De Niro’s moment of literary triumph in a local library where he can finally believe that he indeed belongs there. Ritt wrings every drop of joy and pathos from each of these golden moments, and his camera eye, assisted here by the marvelous cinematographer Donald McAlpine, and which was so much a part of the excellence of Cross Creek and The Great White Hope, hasn’t lessened with time either. There is an autumn scene that is magisterial in its beauty and simplicity, and the continual cutting back to Fonda’s bakery where she believably embarks on a litany of line jobs in that establishment keeps that dead-end job a constant reminder to her and us of her basic unhappiness and lack of fulfillment.

The film’s theatrical aspect ratio of 2.35:1 is faithfully reproduced in 1080p using the AVC codec. Contrary to many MGM transfers, this one is a honey with excellent, lifelike color and details in hair and facial features revealed through the image’s outstanding clarity. Contrast is likewise exemplary and consistent throughout. The movie has been divided into 24 chapters.

There are no problems at all with the DTS-HD Master Audio 2.0 stereo sound mix. Dialogue has been well recorded and has been placed in the center channel with the other channels containing John Williams’ lovely, involving background score and the atmospheric sound effects appropriate to the movie. No age-related artifacts are present in this encode.

Audio Commentary: film historians Nick Redman and Julie Kirgo have an amiable and revealing chat about the film, its strong points and weaknesses, and speculations as to why it didn’t go over well upon first release.

Six-Page Booklet: contains some color stills, original poster art on the back cover, and film historian Julie Kirgo’s incisive analysis of the movie.

Martin Ritt’s Stanley & Iris isn’t the masterpiece that tighter, more succinct writing and more intensively portrayed emotions might have made it, but it’s a quiet cinematic gem of some dramatic force and containing such beauty that it can’t be fairly ignored. There are only 3,000 copies of this Blu-ray available. Those interested in purchasing it should go to either www.twilighttimemovies.com or www.screenarchives.com to see if product is still in stock. Information about the movie can also be found via Facebook at www.facebook.com/twilighttimemovies. 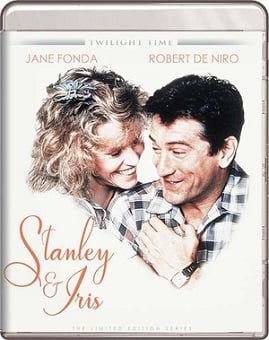