A brooding excursion into obsessive love and revenge, Matthew Ross’ Frank & Lola has indie film written all over it: a small cast, a few interiors in Paris and Las Vegas, and a psychological examination of tortured souls that piques the interest but doesn’t quite satisfy it.

A brooding excursion into obsessive love and revenge, Matthew Ross’ Frank & Lola has indie film written all over it: a small cast, a few interiors in Paris and Las Vegas, and a psychological examination of tortured souls that piques the interest but doesn’t quite satisfy it. The movie has some strong scenes and features excellent roles for its two leading players, but much of the window dressing surrounding their pas de deux might have done with some fleshing out.

Talented chef Frank (Michael Shannon) meets aspiring fashion designer Lola (Imogen Poots), and their chemistry together is immediate. They each have a way of pushing each other’s buttons just enough to keep interest on one another high, but there are problems. Frank is abnormally jealous and suspicious of the men who seem attracted to the flirtatious Lola, and parts of Lola remain an enigma to him until she finally breaks down and reveals a childhood rape at the hands of a Parisian playboy Alan (Michael Nyqvist) who had been dating her mother (Rosanna Arquette) at the time. When Frank auditions in Paris for a chef opening, he makes it a point to “accidentally” meet Alan with the intention of making him pay for his indiscretion. But Alan has more of the story that Lola had withheld from Frank.

This is the first feature film for writer-director Matthew Ross who wastes no time on sensual sex scenes (there are some, but we get the gist of them without lingering especially the very erotic opening one) or drawn out arguments between the couple. There is almost a cinematic shorthand going on here that keeps things moving but also unfortunately slights characters and narrative that we certainly would have been interested in knowing more about. Lola’s entertainment writer-mother Patricia drops celebrity names in the blink of an eye but is reduced to one scene even though she’s played such an important part in making Lola the dysfunctional adult she is. Likewise playboy Alan and his sophisticated wife Claire with her strict rules for their open marriage pop up here and there without establishing firmer roots in the story in which they play such key roles (and the climactic confrontation between Frank and Alan doesn’t convincingly solve their dilemma to the extent Frank seems to think it has). Director Ross, however, does show flair with the camera making Frank’s talents in the kitchen mouth-wateringly real and immediate and a journey to a Parisian sex club rather sleazy and unappetizing. Due to its indie budget, of course, there are no long, winding tours of either Las Vegas or Paris though great portions of the story are divided between the two very different settings.

Michael Shannon’s brooding Frank, slightly inarticulate and yet also quite talented, has that damaged look about him that makes him exceedingly dangerous, a smoking time bomb with a lit fuse of indeterminate length (a blood-spattered chef’s tunic he wears in the kitchen during Halloween festivities only elevates our fears). We never quite get under the skin of Imogen Poots’ Lola, clearly burying years of psychosexual injury under a veneer of ebullient flirting and sunny personality, but that certainly makes her endlessly intriguing. Michael Nyqvist’s Alan seems a sleaze from our first view of him, and his smug, knowing demeanor only increases as the film runs. Rosanna Arquette as Lola’s mother and Emmanuelle Devos as Alan’s wife each sets off sparks in their brief on-screen appearances. Justin Long pops up effectively as a red herring, seemingly a potential rival for Lola’s affections and a focus of Frank’s simmering jealousy but actually a conduit for good things that happen for the both of them.

The film’s theatrical 2.40:1 aspect ratio is faithfully conveyed in a 1080p transfer using the AVC codec. Beautifully sharp and detailed, this transfer is stunning throughout. Color is wonderfully controlled with both Paris and Vegas containing a warm, appealing color palette that never disappoints the eye. Contrast has been consistently applied to the imagery, and black levels are rich and deep. The movie has been divided into 20 chapters.

The DTS-HD Master Audio 5.1 sound mix seems more centered in the front channels through much of the film’s first half but begins to spread its wings a bit once the action moves to Paris and we get some ambiance of the city in the rear surrounds and the background music by Danny Bensi and Saunder Jurriaans as well as some pop songs on the soundtrack that get the full surround spread.

A psychosexual modern noir with fascinating characters not always being what they seem, Matthew Ross’ Frank & Lola is a low key character drama that doesn’t wear out its welcome. First-rate video and audio quality certainly offer some basic appeal. 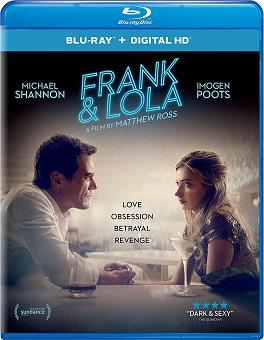