The Erwin Brothers’ latest film, I Still Believe, tells the tragic love story that inspired singer-songwriter Jeremy Camp (played by K.J. Apa) to write the title song and the stepping stone to his music ministry.

Quick disclaimer upfront – although I have the same last name as Andrew and Jon Erwin, the directors of I Still Believe, I bear no relation to them.

It would be very easy to dismiss I Still Believe as a typical faith-based movie that preached its message to the Nth degree and was cashing in on the directors’ prior success, 2018’s I Can Only Imagine. Yes, both films are biopics about a musician and the tragic story that inspired him to write one of his signature songs that would propel him (and his band) to stardom within the Christian Rock community. What sets the Erwin Brothers apart from other makers of faith-based movies like the Kendrick Brothers is that the story comes first, the message layered underneath without becoming overly preachy. That was true of I Can Only Imagine, and rings true again with their latest, I Still Believe.

The heart of I Still Believe is the college years of Christian music legend Jeremy Camp (K.J. Apa) and the love story between him and his first wife. Shortly after arriving at Calvary Chapel University in San Diego, Jeremy finds a job as a stagehand for The Kry’s lead singer Jean-Luc La Joie (Nathan Parsons). The two become friends, with Jean-Luc a mentor for Jeremy, offering advice on composing his own songs. At a concert one evening, Jeremy meets Melissa (Britt Robertson), who also happens to be a good friend of Jean-Luc’s. Jeremy and Melissa begin dating in secret, as Melissa believes Jean-Luc has feelings for her that are not reciprocal. That complication leads to a breakup, until Melissa is diagnosed with third stage cancer. Jeremy rushes to her bedside in California from his parent’s home in Indiana during the Christmas break, and against all odds Jeremy proposes marriage. Most audience members, whether you know the true story or not, know where this story is headed at this point, and the movie does take a few twists (is she healed?) as the two marry and enjoy their honeymoon.

It is the love story that propels much of the film, and the tragedy that befalls the third act never feels like disease of the week TV movie fare. The performances are solid, particularly the leads K.J. Apa (The CW’s Riverdale) and Britt Robertson (ABC’s For the People), who have some real chemistry together (the two appeared together previously in A Dog’s Purpose). Gary Sinise and Shania Twain lend support as Jeremy’s parents, although Twain’s role as mother felt underwritten.

Since Blu-rays were unavailable to review due to the current COVID-19 pandemic, Lionsgate did send me a code to redeem a digital HD copy of the film (even though the movie is available in UHD on most digital retailers). Digital can be tricky to review, as there are several factors involved that can cause issues beyond the viewers control, such as internet traffic and bandwidth, the encode a particular digital retailer is using, and how that encode performs on that retailer’s app on various streaming devices. After selecting one of several retailer choices on Lionsgate’s code redemption site, I screened the film on the Vudu app on my Roku Streaming Stick+, and was quite pleased with the results. Overall, detail was excellent, with nicely defined textures and facial features. Even though this was not an HDR presentation, black levels were still very good with no evidence of crushing – the final sequence where the real Jeremy Camp and his family appear on the beach at night showed some impressive depth. Colors also appeared natural and vivid, not overly saturated.

Since this was an HD presentation, Vudu only provided a Dolby Digital+ 5.1 track (the UHD version includes Dolby Atmos) which still sounded quite good. For the most part, I Still Believe is a drama with live concert performances. It is those live performances that really drive this mix, adding concert hall ambience and crowd noise to the surrounds that help to immerse the viewer in these scenes. LFE helps give the music some added low-end bass to round out the mix. Dialogue is clear and understandable throughout.

The digital version of I Still Believe, at least on Vudu, includes most of the special features found on the Blu-ray release. The main exception is an audio commentary track, which is not included here.

The Origin of “I Still Believe” (1080p; 9:51): The real Jeremy Campo along with the cast and crew discuss the events that inspired the movie and adapting it for the big screen.

The Casting of “I Still Believe” (1080p; 9:15): The Erwin Brothers discuss the task of casting the two leads for most of this piece, touching briefly on the casting of Jeremy Camp’s parents.

The Music of “I Still Believe” (1080p; 6:39): The Erwin Brothers discuss the selction of music tracks for the film.

Bart & Jeremy (1080p; 10:40): MercyMe frontman Bart Millard (whose life story was told in I Can Only Imagine) and Jeremy Camp discuss what it was like to have their lives re-told for the big screen.

I Still Believe, although a faith-based movie, is probably more accessible to a mainstream audience than most other films in this genre. Vudu’s digital presentation was excellent.

Bummer on no Atmos. I had to endure the trailer for this a dozen damn times when we were still able to go to the theater. It sounded AWESOME in the Atmos theater. I could not possibly bring myself to care about the film tho =)
Expand signature
Fighting against the Trailer Industrial Complex!
Check out the HTF Podcast!
HTF Rules
Classified Sales Rules
UV Sales New Clarifications
Reactions: Todd Erwin
You must log in or register to reply here.
Share:
Facebook Twitter Reddit Pinterest Tumblr WhatsApp Email Link 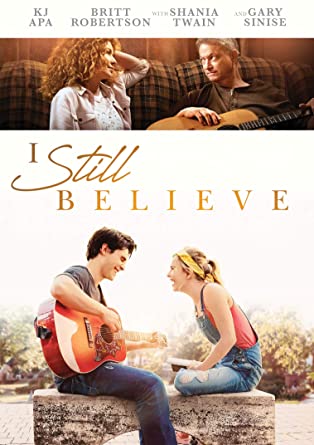