Two pairs of star-crossed lovers, one in the present and one in the past, become coincidentally entwined in yet another adaptation of a Nicholas Sparks romance novel in George Tillman Jr.’s The Longest Ride. By now, the trope of contrasting love affairs from different eras has become a Nicholas Sparks tradition, so much so that the formula has become a bit threadbare, repetitive, and banal, and even real talent before and behind the camera can’t make stale ideas seem fresh when we’ve seen this same basic scenario play out time and again. For those who love this kind of heartfelt sentiment, this is as good an example of it as any, but the steady stream of this romantic recipe is now becoming almost ludicrously predictable. 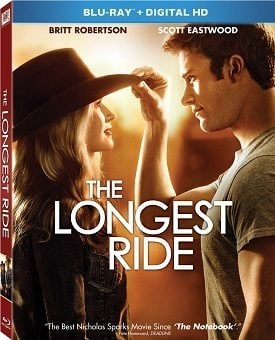 On the comeback trail after a horrific accident at a bull riding event sidelined him for a year, Luke Collins (Scott Eastwood) bumps heads with art major Sophia Danko (Britt Robertson) at an event that he wins, and the two have instant chemistry despite their differing backgrounds and interests. On the way home from a date, they come across elderly Ira Levinson (Alan Alda) involved in a car accident, and Sophia becomes almost an adopted daughter to the widower as he recovers. Ira relates the story of his lifelong love with Ruth Pfeffer (Oona Chaplin), a woman he (Jack Huston as the young Ira) subsequently married and endured the usual ups and downs of a marriage of over fifty years. In some ways the story of Ruth and Ira parallels the travails of the young lovers who must try to make their relationship work despite being pulled in opposite directions.

Craig Bolotin has adapted Nicholas Sparks’ novel with its two sizable love stories (hence the two-plus hour running time), but all of the flashy direction and youthful gorgeousness of the two leading players on the modern side of the tale can’t disguise the fact that theirs is by far the least interesting story in the film. The beautiful yet tragic story of Ira and Ruth whose passionate love endures a devastating disappointment when Ira returns from World War II is strong enough that it could have carried an entire film without having to return to the trite tale of two stubborn youths who refuse to compromise their dreams until heartache makes it necessary for one of them to make the sacrifice. Yes, that side of the story does feature a succession of exciting bull riding events showing the skill and danger inherent in the sport (though, of course, the story does come down to a final ride to determine the national champion), and we get some lovely scenic views of North Carolina filmed on several locations around the state. But apart from the slight twist that occurs at the end which really ties the two tales together, it’s always the older story of Ruth and Ira (filmed in desaturated color with a slight sepia tone) that holds the emotional heart of the film from its tentative first steps through a courtship period (which includes a fun jitterbug sequence), the war sequence, some idyllic scenes at the beach which are truly romantic and seem genuinely expressive, to the heartrending attempts to establish a family (the script takes the easy way out, however, by simply having Ira comment that “adoption wasn’t so easy back then” without substantiating such an absurd statement). Yes, even that side of the story isn’t without fault, but it’s unquestionably the part of the movie that one comes away remembering.

Jack Huston and Oona Chaplin both do terrific jobs hiding their natural European accents (Huston especially), and their scenes both together and apart as Ira and Ruth really give the film a substance that supersedes the predictability of the script. Britt Robertson is very good, too, corralling her natural ebullience and channeling it through both humorous and dramatic set-ups. Scott Eastwood is less successful. He certainly has moments where youthful memories of his father Clint can’t help but intrude on his work, but his southern accent is uncertain and while he’s believable in the bull riding scenes (naturally stunt riders did the heavy lifting here), he isn’t always able to hold his own in scenes with his co-stars, especially with Lolita Davidovich who’s excellent as his mother and not used nearly enough in the film. Alan Alda brings decades of canny charm and gravitas to the role of the elder Ira. Danny Vinson as the rider who’s risen to the top during Luke’s year of recuperation has a good, menacing moment or two despite the clichéd nature of such a character.

The film’s 2.40:1 theatrical aspect ratio is faithfully presented in this 1080p transfer using the AVC codec. The modern scenes are suffused with light and appropriate contrast offering up wonderfully detailed sharpness that’s always a pleasure to watch. The scenes in the past are interesting tonally, too, even if the color has been reduced a bit and a slight brown wash placed over the picture. Color otherwise is always true and crisp with realistic skin tones throughout. The movie has been divided into 32 chapters.

The DTS-HD Master Audio 7.1 sound mix doesn’t have the punch and drive of other similar mixes. The fronts receive more heavy concentration of the mix than the rears though the music score by Mark Isham along with some country tunes does get more thorough treatment through the soundstage. Sound effects, even in the bull riding events, don’t always immerse the viewer as in the best mixes but are sporadically effective.

Audio Commentary: director George Tillman Jr. and actress Oona Chaplin share the track having an interesting conversation covering everything from the casting process to their impressions of North Carolina, the story, and the cast.

Deleted Scenes (19:13, HD): fourteen scenes may be watched individually or in montage, and audio commentary by Tillman and Chaplin is also available to be activated.

A Writer’s Journey (4:44, HD): a tongue-in-cheek look at a typical day in the life of author Nicholas Sparks.

Meet the Real Bull Riders (6:08, HD): announcer Brandon Bates introduces us to a succession of real bull riders, some of whom appeared in the film, who talk about their sport and the dangers and rewards it presents. Troy Brown, the film’s bull riding stunt coordinator, also comments.

Luke’s Bull Riding School (4:59, HD): star Scott Eastwood trains for a week to learn to be convincing as a bull rider.

Promo Trailers (HD): Paper Towns, The Best of Me, Far from the Madding Crowd (2015), among others.

The Longest Ride will give lovers of Nicholas Sparks’ oeuvre the romantic fix they need right on cue, but the rest of us will sit and watch the clichés as they pass by quickly and furiously. At least the video quality will leave nothing to be desired, and the sound is more than adequate to the task. For admirers of gooey romance, have at it; all others beware!

This piece of crap gets a BD while the other two(concurrent and actually worth watching) Britt movies get DVD and Digital Download only...