Toe-tapping musical is most welcome even with some caveats. 3.5 Stars

A sure cure for what ails you, NBC’s Hairspray Live! is the fourth and in many ways most ambitious of the network’s live holiday musical presentations.

A sure cure for what ails you, NBC’s Hairspray Live! is the fourth and in many ways most ambitious of the network’s live holiday musical presentations. With a live audience and some outdoor locations, these two elements done for the first time on NBC after being utilized first with tremendous success on Fox’s Grease Live! earlier in the year, Hairspray Live!, despite its general success, was not without its problems, some still not rectified completely on this home video release. Still, the production is blazingly colorful, features a mostly superb cast, and offers a Broadway musical of more recent vintage than those which had been done most recently on both NBC and Fox.

Plus-size high school sophomore Tracy Turnblad (Maddie Baillio) wants more than anything to dance on Baltimore TV’s teen dance program The Corny Collins Show, but the program’s bigoted producer Velma Von Tussle (Kristin Chenoweth) would never think of allowing an overweight girl, no matter how talented a dancer, on the show to compete for the spotlight with her daughter Amber (Dove Cameron). Tracy, however, is seen dancing by the show’s host Corny Collins (Derek Hough) who’s emceeing a high school dance and is welcomed onto the show where teen heartthrob Link Larkin (Garrett Clayton) is charmed by Tracy’s ebullience and open-hearted, integrated view of the world. In fact, sharing detention with African-American students like Seaweed J. Stubbs (Ephraim Sykes) has taught her some new dance moves she wants to incorporate on the dance show along with her desire to finally integrate the show instead of relegating the black teens to a separate “Negro Day” program once a month. Velma vows never to allow that to happen, but Tracy’s mother Edna (Harvey Fierstein) and Seaweed’s mother Motormouth Maybelle (Jennifer Hudson) want Tracy to change the world and are both willing to do anything to help her accomplish it.

The Broadway libretto by Mark O’Donnell and Thomas Meehan has been adapted for television by its four-time Tony-winning star Harvey Fierstein who has retained most of the songs and set-ups from the stage version of the show (the 2007 film version had a reduced musical program) which continues to emphasize its plea for tolerance, not only in equality for all races but also broadmindedness for all shapes and sizes of human beings, too. From the buoyant opening number “Good Morning, Baltimore” to the closing extended dance break “You Can’t Stop the Beat,” the show is and always has been a toe-tapping delight with the Marc Shaiman-Scott Wittman score a superb pastiche of 1960s pop, soul, and funk, all filtered through a Broadway musical strainer to allow its cast of stage and screen pros a chance to strut their stuff in the grandest of fashion. The big production numbers from the stage continue to work just as well in the television version with the opening and closing numbers and “Welcome to the 60’s” all defying the viewer not to get with the beat while character numbers like Tracy’s “I Can Hear the Bells,” Velma’s “Miss Baltimore Crabs,” Seaweed’s “Run and Tell That!” and Maybelle’s two showstoppers “Big, Blonde, and Beautiful” and “I Know Where I’ve Been” all reveal depths in the personas which the best musicals always manage to do: combining sprightly melody with revealing lyrics to get to the heart of the person doing the crooning.

But the television production both live and in this home video version was not without its problems. While shots of boom microphones dipping into the scene and cameramen caught off guard have been eliminated and audio cut-outs are all cleaned up and restored and we’ve been freed from those irritating commercial breaks that featured Darren Criss cheerleading for the production, there are still some remaining audio problems particularly with the accompaniment being louder than the vocals especially noticeable in the latter parts of the presentation here: Link, Tracy, Seaweed, and Penny’s (Ariana Grande) “Without Love” production number and Corny’s “Hairspray” title song. Throughout, the television direction is spotty. While a number like “Mama, I’m a Big Girl Now” has been effectively rendered in split screen and is an exciting viewing experience knowing such expertise is being accomplished live, other big production numbers contain so much activity that it seems director Alex Rudzinski doesn’t know quite where to direct his main attention at any given moment: “You Can’t Stop the Beat” is the chief victim of director schizophrenia (the cuts between cameras are frenetic but often ineffective), but “Welcome to the 60’s” also has lots of pockets of activity where things get missed. The lighting problems which plagued the live presentation have also not been quite rectified either with Jennifer Hudson practically in shadows during parts of her soul-searing “I Know Where I’ve Been.” The live audience added little to the proceedings as well, effective somewhat in the Corny Collins sequences, but with no notable laughter at any of the piece’s considerable humor and only some numbers generating applause, the inclusion of a live audience is still a problematic decision.

Newcomer Maddie Baillio makes a fine Tracy, missing perhaps some of the belting brassiness of some of her predecessors but able to keep up with the considerable singing and dancing chores of this enormous role. But the female cast of the production is aces all around with Jennifer Hudson as Motormouth Maybelle stopping the show with both of her solo songs and Kristin Chenoweth as the despicable Velma pulling out her coloratura soprano for a couple of end-of-song flourishes in her “Miss Baltimore Crabs’ song and reprise. Ariana Grande as Tracy’s best friend Penny may be more singer than actress, but for the size of her role, she pulls it off without major problems. Ditto Dove Cameron as the archly snooty Amber Von Tussle. Shahadi Wright Joseph seems to get a little lost in this mammoth production as dancing sensation Little Inez. After the mess John Travolta made of Edna Turnblad in the 2007 movie version, it’s great to have Harvey Fierstein, frog voice and all, recreating his Tony-winning Broadway performance as the plain-spoken but loving Mama. Martin Short as husband Wilbur likewise pairs well with Fierstein, and their showstopping patter song “You’re Timeless to Me” is a welcome diversion in the show’s second half. Derek Hough displays a more than acceptable singing voice to go along with his slick dance moves as Corny Collins. The show’s two main teen males, however, aren’t quite up to the task though Seaweed’s Ephraim Sykes comes closer to the mark with his solo “Run and Tell That” than Link’s Garrett Clayton does with “It Takes Two.” Clayton, his chiseled looks aside, is the program’s weakest link (no pun intended) with limited vocal skills and not having much chemistry with the show’s leading lady. Among the huge cast of famous faces expertly contributing a few notes, a few steps, or a few lines are Sean Hayes, original film Tracy Ricki Lake and original stage Tracy Marissa Jaret Winokur, Rosie O’Donnell, Andrea Martin, and Billy Eichner.

Framed in the widescreen television aspect ratio of 1.78:1, the transfer has been anamorphically enhanced for widescreen televisions. Sharpness is quite good except for a moment or two of shoddy focus pulling, and the wildly colorful production comes through beautifully even in standard definition. Of course, there are problems with aliasing and moiré patterns which aren’t surprising given the lack of high definition, but a Blu-ray would certainly have come closer and probably even exceeded the network’s hi-def presentation. It’s a pity Universal didn’t consider a Blu-ray this time out. The program disc has no menu of scene selection, but the program has been divided into 13 chapters to correspond to the number of commercial breaks in the original broadcast. The individual numbers have not been chapter marked.

The Dolby Digital 5.1 sound mix spreads the vocals across the front three channels while the orchestral accompaniment gets the complete surround placement. While the mix of vocals to orchestra is more balanced here than it was live, there are still occasional problems within numbers where singers can’t be heard clearly. Overall, however, what’s on the disc is superior to the live audio feed.

Universal has really gone the barebones route with this release with no bonus features at all, not even including here the on-line featurettes which were produced prior to the production’s live performance.

Hairspray Live! offers more of the original Broadway show than we got in the 2007 movie. While not completely free from the problems encountered during the live telecast, this home video presentation sets most of the technical glitches right which could be fixed. Universal’s decision to release the show once again only on DVD and not to include any bonus material, however, is a regrettable one.

That should be Velma Von Tussle, not Thelma (Kristin Chenowith).

Malcolm R said:
That should be Velma Von Tussle, not Thelma (Kristin Chenowith).
Click to expand...

Argh! What a ridiculous mistake on my part. I'll change it right away.

While I would have preferred it be available on Blu-ray I'm glad it is available in some form as I completely missed this when it was on TV and heard that it was great.
R

I find it very sad that not one of these TV Live musicals has made it to blu-ray. These were events in HD and had gorgeous color and great musical soundtracks, and I am very upset that Universal continues to snub the blu-ray on these.
Reactions: Matt Hough

RobertSiegel said:
I find it very sad that not one of these TV Live musicals has made it to blu-ray. These were events in HD and had gorgeous color and great musical soundtracks, and I am very upset that Universal continues to snub the blu-ray on these.
Click to expand... 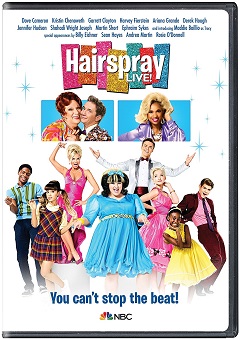