Forum List What's new Dark Style Change width
Log in Register
What's new Search
Menu
Log in
Register
Navigation
Install the app
More options
Dark Style
Close Menu
Posted on December 26, 2016 by Neil Middlemiss
You are using an out of date browser. It may not display this or other websites correctly.
You should upgrade or use an alternative browser.
Very Highly Recommended 4.5 Stars

Revisiting Boyhood, following my review of the first Paramount release (largely unchanged below), I am struck by the unassuming and understated power of this film. The natural feel and flow of the film, the non-traditional narrative, and the expressions of the world unchanged by our daily joys and failures as time move on unrelenting, provides for a rewarding and surprising experience.

As I stated in my previous review, Director Richard Linklater’s Boyhood understands the antagonism of siblings and the uncertainties of youth, and though dramatically we watch a young boy deal with these uncertainties, what forms through the prism of imperfect parenting (is there any other kind?) is a view of love, loyalty, struggle and celebration. With the same actors reprising their roles from time to time over a 12 year period to bring about the unique experiences of growing up, the world we see around us as young boys and girls is openly explored and even fondly admired.

“You know how everyone’s always saying seize the moment? I don’t know, I’m kind of thinking it’s the other way around, you know, like the moment seizes us.”

Mason (played by newcomer Ellar Coltrane) is for the most part a typical young boy. He lives with his mother and older sister, his Father visits from time to time, and he exists in and watches the world around him. We watch mason grow up, witnessing moments in his life over 12 years, adjusting to the eddies of life, moving from state to state, adjusting to his mother’s struggles with work, studying and men, getting to know his untethered father, and growing into, and through, the stages of boyhood.

Boyhood isn’t a traditional narrative. It features moments over twelve years that a young man might remember of his childhood. Not the rote moments that romanticize childhood from the movies, but unpredictable, even unlikely moments that etch themselves indelibly in our memories. As such, Boyhood briskly moves through several periods in young Mason’s life and doesn’t outstay its welcome in any one period of experience. Moments such as an encounter in the boy’s restroom at school at the hands of two bullies is brief, and not revisited, or his mother meeting a man for the first time at a party are often left behind, narratively speaking, as we explore something several weeks, months or years later. What this skipping approach offers is something that in sum is entirely rewarding; the accumulation of those slices or life and memory punctuating the corners of remembered childhood experiences. Some elements become recurring or continuing threads, others slices exists as single stones that make a splash in the boy’s life but then sink out of sight. It’s a beautiful idea, naturally and simply realized. There isn’t a clever of heavy plot twist or thread at play here. Quite the opposite. And I hesitate to call it a tapestry of the life of a young boy because we see more than fragments that make up a whole. But Boyhood is elevated by this assembly of dashes of life.

Aside from the novel approach of filming over 12 years, Boyhood embraces its simplicity, assembling a solid cast fully committed to their characters and the somewhat risky approach to capturing scenes over an extended period. It is clear Linklater pulls from real-life experiences from his cast to craft the moments in the film, and the invested cast bring a great deal of natural talent and welcome perspective to the proceedings. Patricia Arquette as the mum, overworked and underappreciated – by her children, ex-husband, and the love interests that come into, and out of her life – delivers a wonderful, honest performance and has rightly been recognized with awards, including the Golden Globe for Actress in a Supporting Role and an Academy Award nomination in the same category. Ethan Hawke’s growth over the 12-year span is fascinating to watch. Introduced as a distant, selfish father-figure, he embraces his role as the dad with relatively infrequent visitation, and through the course of 12 years is shown to impart enough advice and freedom to be a stabilizing figure in his children’s young lives. Director Richard Linklater cast his daughter, Lorelei, as Mason’s brother, Samantha. Her role in the film is to be a frequent spoil to Mason (the way that all boys likely see their older sister,) and she does fine here. Ellar Coltrane’s evolving performance as Mason is laid back, almost shy, and as such is somewhat unsung. We get the feeling that we’re not watching a young actor perform on camera, but rather a young boy experiencing life under the gaze of the lens. As the film closes and Mason reflects upon life one more time for us, the departure from his boyhood is complete and adulthood has officially arrived. In that moment, Coltrane’s natural and very human and awkward portrayal is in full stride.

Boyhood is a film unlike anything else. It isn’t a film with a middle, beginning and end; it isn’t the story of a young boy in the key moments of his life; it’s a peek into the life of a young boy over twelve years touching on moments, many unremarkable to the outside world (but important in some way to the boy), that are like flashes of memory we all might have looking back over who we were growing up. That quality, slices and chunks of boyhood, makes Linklater’s film remarkable – and of such surprising weight that it will sit with you long after you’ve stepped away from it.

Shot on 35mm and presented in 1.78:1 aspect ratio with a new 2K digital transfer supervised by director Richard Linklater, Criterion’s Boyhood is a delight.

As with the previous Paramount release, detail levels are exceedingly good with nicely warm and natural colors. Flesh tones are once again natural and unbiased by shielding make-up techniques, and the raw and unfiltered appearance supports a fly-on-the-wall feel of everyday life rather than a Hollywood dramatic construct.

The 5.1 Surround DTS-HD Master Audio was remastered from the original audio master files using Pro-Tools HD, and it is just a hair better than the previous release if I take the time to carefully compare the two releases side by side. For most, the improvements will be largely imperceptible. Since it was a solid audio before, the crisp dialogue remains perfectly leveled and balanced, and the sounds of the outdoors (as children ride bikes, walk streets, or as in one scene, take a swim in a rock pool), do just fine. Not much is asked of the full capabilities of the audio, but what is presented still faithfully produced what the film demands.

Criterion expands upon the scant special features available with the previous Paramount release, and provides a few solid new extras such as the packed audio commentary, a moderated discussion with the filmmaker and two principle actors, and a nearly hour-long documentary taking a look at the making of the film over the 12-year period. This is a fine collection of special features, though more perspectives and a deeper dissection from those not directly involved with the production (beyond the included video essay) would have been a perfect addition. The interpretation of work can be as informative as the intentions behind a work, but regardless of that omission, this collection is vastly better than the previous Blu-rays offering and solid enough to satiate interest in this film.

New Audio Commentary: Featuring director Richard Linklater and nine members of the cast and crew, this is a delightful listen as the participants share fond memories of production, discuss character motivations and meaning, and talk some about scenes that were cut (and why) from the finished film. This is one of the better commentaries I have heard in a while with welcome evaluations of the filming process, transitions and character and actor growth.

12 Years (49 minutes): A new documentary produced for this Criterion release that takes us behind the production with footage shot over the course of its twelve years.

Memories of the Present (57 minutes): New discussion featuring Linklater and actors Patricia Arquette and Ellar Coltrane, moderated by producer John Pierson. Here you’ll find interesting reflections a year or so after the awards mayhem had finished and how they have come to terms with no more production.

Always Now (30 minutes): New conversation between Coltrane and actor Ethan Hawke, deep at times, sharing appreciation for each actor and good fortune at being a part of a wholly unique production.

Time of Your Life (13 minutes): A new, thoughtful video essay by critic Michael Koresky about time in Linklater’s films, narrated by Ellar Coltrane.

Through the Years (24 minutes): Featuring selections from the book Boyhood: Through the Years, this extra shares a collection of portraits of cast and crew by photographer Matt Lankes, narrated with personal thoughts from Linklater, Arquette, Hawke, Coltrane and producer Cathleen Sutherland.

Boyhood is a film that helps you remember yourself growing up. The specific situations may be different, but who we are at various times in life is very familiar as we see things we don’t understand, fight against things we don’t like, and struggle to hold on to things we love but must let go. Seeing the world through a young boy’s eyes in a film that casually and naturally ponders broad, deeper questions, is surprisingly something of a revelation. We’ve explored these topics before in movies that examine life growing up, but following a family, with divorced parents, making their way through life’s moments over a brisk 12 years, following the same actors as they age and mature in their own lives and participate in the unremarkable fictional narrative (unremarkable as a compliment, with a story not driven by hitting familiar movie moments in life,) is simply a wonderful accomplishment.

There’s a drifting quality to Boyhood, easing through the years, touching on small but important moments in a young boys life, created, filmed, and produced with a beautiful, natural honesty.

Criterion’s release of this film is the version to pick up with its fine presentation and valuable set of special features. Highly recommended. 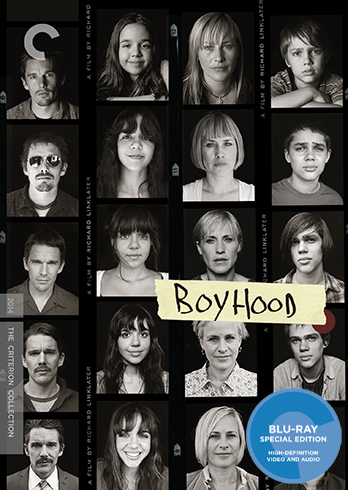